That said, it’s still quite viable for raiding, but it’s not tailored for it. END_OF_DOCUMENT_TOKEN_TO_BE_REPLACED

Explosive Shot is the signature ability of the survival tree. However, I often find that many hunters are unaware of how and when to properly use it, especially in the event of a Lock and Load proc.

Until Kill Shot becomes available (once the kill target is at or below 20% health), Explosive Shot is the number one priority shot. In other words, its cast should not be delayed for anything. Many players have the wrong impression, thinking that Black Arrow and/or Serpent Sting should be applied first in order to further buff the shot. This is incorrect. Delaying Explosive Shot for any shot besides Kill Shot results in a DPS loss. END_OF_DOCUMENT_TOKEN_TO_BE_REPLACED

Note: Visit this page to see my current Power Auras configuration, along with a complete listing of the Power Auras strings. Last updated – 06/08/2011.

The most common question I’ve received thus far concerning my UI is, “wtf is that starfire-looking buff smack in the middle of the screen, and more importantly, how do I get rid of it..?” 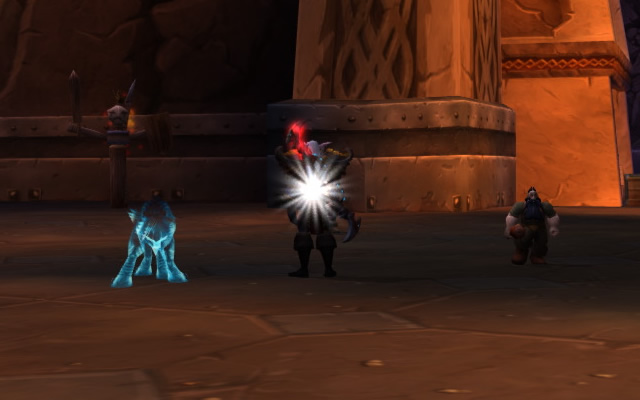 If the one in question is the aura displayed above, then that would be the one which tells me when I’m not in Aspect of the Dragonhawk. Since I’m in that aspect 99% of the time, I rarely ever see it. For those of you that have downloaded my UI and wish to remove that one, just bring up the Power Auras config screen by typing in /powa. Click on the Dragonhawk icon and then ctrl-click on the Delete key.

Alternatively, if you want to try it but are using a lower level Hunter without Dragonhawk, then just change the aura to Aspect of the Hawk.

Since some of you may be unfamiliar with Power Auras, I figured I’d give a quick rundown of the ones I’m using and why.

Here’s a quick reference chart for the Power Auras I have configured for my Hunter. 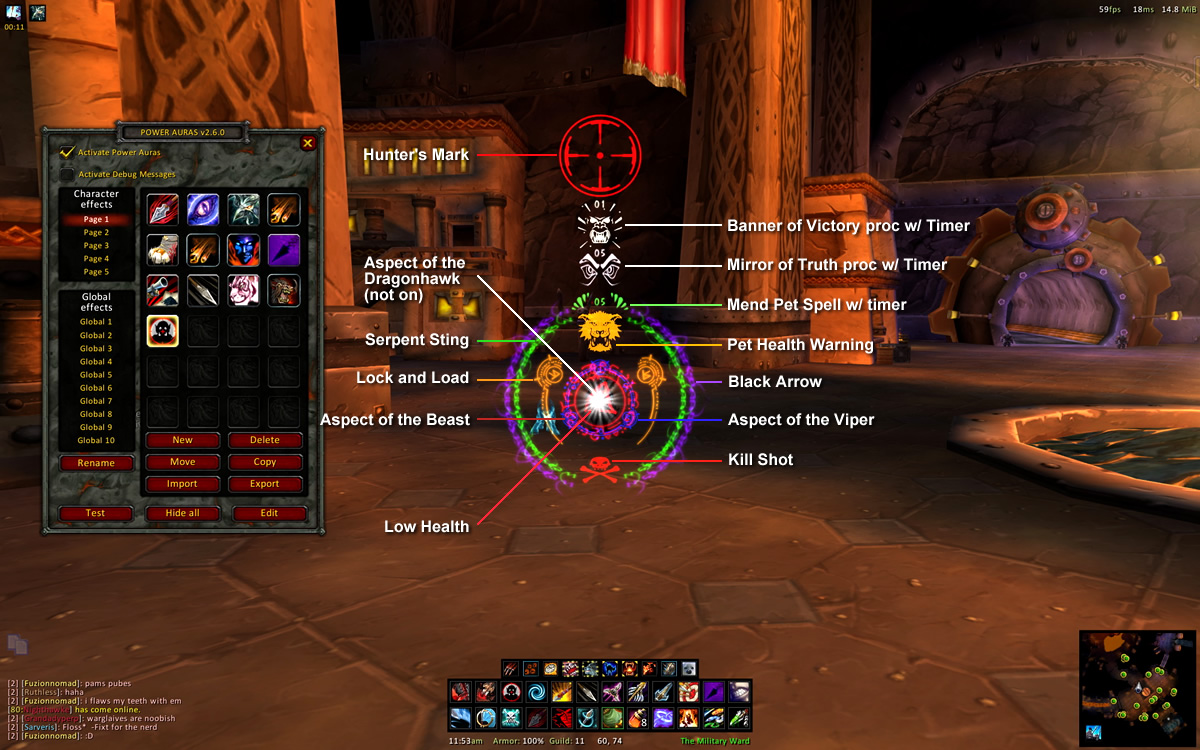 This looks like a mess, but in practical situations only a few of them are visible. If I’m doing my job properly, then there are typically only a handful that appear on the screen at a given time.

So what are Power Auras?

END_OF_DOCUMENT_TOKEN_TO_BE_REPLACED

One of my regular visitors asked this question in a comment from a previous post. It was shortly following the Worgen madness that swept through Azeroth, hence the “Garwal” reference. 😉

I’d like to ask you a new article: “how and when use cooldowns while raiding”

Let me begin by saying, I’m not an authority on proper cooldown management, but what I do seems to work just fine for me. 😉 If anyone has any other recommendations or suggestions on how to improve cooldown usage, please share.

Okay, so first of all… I don’t begin a boss fight unless I have at least 8mins or so left on my buffs. Experienced raiders will usually refresh buffs if needed before a boss fight. However, if you ever notice that you’re missing a buff or are within minutes of losing one, always ask to have it refreshed in raid chat. In PuGs it can sometimes be a little more difficult to get all the necessary buffs for you and your pet, so just be vocal yet courteous about it. Whispers are always effective too.

The ideal buffs you’re going to want on your Hunter before you begin a boss fight are as follows:

Prayer of Fortitude is worth a mention since it aids in pet survivability. SV Hunters benefit the most from it due to Hunter vs. Wild, but we’re talking about MM here. Also, make sure that you get Blessing of Might on your pet and Kings too if possible.

There are other beneficial buffs, but those will either be proc-based, passive, or shorter duration buffs which will be continually refreshed throughout the fight (Horn of Winter, Leader of the Pack, etc.)

For the next part, I’m only going to talk about things specific to the Marksman spec since that’s what I raid as (Dalaila’s MM too, so I’m sure that’s all he wants to know about anyway).

I like to cast my Misdirection early so that by the time the tank has pulled aggro and I’ve gotten off my three shots, I’m immediately able to cast another. This buys me a lot of time to unleash on the target without having to worry about aggro gain too much. The ideal encounter would begin something like this:

Once Rapid Fire expires I’ll usually Feign Death, as by that time my aggro should be pretty high. Once I cast my next Chimera Shot after the feign, I then pop Readiness immediately followed by another Chimera, Aimed, and Arcane Shot. At this point I blow Rapid Fire again and settle back into my regular shot priority.

In some fights, the RL may call for Heroism right away. If that’s the case, then wait until Heroism is over before popping your Rapid Fire. Using Rapid Fire along with Heroism actually translates into a slight DPS loss over having the effects one after the other. However, if it’s a relatively short fight such as Patchwerk, then you may want to pop Rapid Fire anyway so that you can get it back by the end of the fight.

So that covers about the first minute of an encounter. Aside from just firing off Chimera, Aimed, Arcane and Steadies, I do a couple of other things.

Alright… so moving along to the latter part of the fight… As soon as Rapid Fire is available, I pop it again. Once Kill Shot is available, then it’s Readiness time. Unless I have less than a couple seconds left on Chimera, I’ll pop Readiness right after my first Kill Shot. If Chimera is coming off of cooldown within say three seconds or less, I’ll wait until after I blast off a Chimera, then I’ll hit Readiness immediately followed by: Kill Shot > Chimera > Aimed > Arcane

Of course, these rules mainly apply to ideal “Hunter friendly” encounters. If the fight is more complicated and/or involves a lot of movement, target switching, etc…, then you’ll have to adjust on the fly. For these types of fights, you almost need to have a different guide for each one. Best bet here would be to ask questions pertaining to specific boss fights. Unfortunately, I’m a little green when it comes to Ulduar, but if you have any questions pertaining to Naxx then fire away.

So that’s about it. I may have overlooked or failed to mention a couple of things, but please keep in mind that this post is a very basic reference for Hunter raid buffs and Marksman Hunter specific cooldowns.

Oh! One more thing… If you’re not using an addon called OmniCC, I highly recommend checking it out. It adds a countdown to your spell icons showing you exactly how much time is left on your cooldown. A very handy addon.

Feel free to expand upon this or enlighten me with suggestions or constructive criticism. I’m all ears. Well, that goes without saying actually… I’m a Night Elf! Nyuk, Nyuk.