Explosive Shot is the signature ability of the survival tree. However, I often find that many hunters are unaware of how and when to properly use it, especially in the event of a Lock and Load proc.

Until Kill Shot becomes available (once the kill target is at or below 20% health), Explosive Shot is the number one priority shot. In other words, its cast should not be delayed for anything. Many players have the wrong impression, thinking that Black Arrow and/or Serpent Sting should be applied first in order to further buff the shot. This is incorrect. Delaying Explosive Shot for any shot besides Kill Shot results in a DPS loss.

Here is the Survival Hunter shot priority (accurate up through Patch 3.3.2)

With the 2pc T9 set bonus, which allows Serpent Sting ticks to be crits, the shot priority then changes to this:

Although, both Black Arrow and Serpent Sting (by way of Noxious Stings) provide buffs to ranged damage, you should never prioritize either of those abilities over Explosive Shot. Unless Kill Shot is ready, Explosive Shot should be used immediately as soon as its cooldown is up.

Why Explosive Shot is so damn good…

One of the key components to dishing out massive quantities of ranged damage as a survival hunter is proper management of Lock and Load procs. Lock and Load is a buff which causes your next two Explosive Shots to trigger no cooldown, cost no mana and use no ammo.

The proc occurs as a result of periodic damage done by Black Arrow or fire-based traps (6% chance per tick), or via a Freezing Arrow, Frost or Freezing trap (100% chance). Lock and Load has an internal cooldown of 22 seconds, which means it can only proc as often as every 22 seconds. Procs in PvP are pretty predictable, as frost based traps will likely be in use as soon as they are available. In PvE, the proc chance will begin as soon as Black arrow starts ticking (during single target fights) or after a fire based trap has been tripped (in the event of multi-mob AoE pulls).

Although frost and freezing traps have a 100% chance to proc Lock and Load, it is not advisable to use them in a PvE rotation. Lock and Load procs pretty reliably off of Black Arrow and fire based traps, both of which are much better uses of a GCD instead of a non-dps ability such as Frost Trap. PvP’s a different story however. 😉

This is a pretty amazing talent, considering Explosive Shot does an incredible amount of damage. However, unless you execute properly during this proc, you won’t enjoy its full benefit.

The tooltip states that the effect will trigger no cooldown, meaning you could theoretically spam 3 Explosive Shots back-to-back. While this may seem like the right thing to do, especially considering how much I’ve been preaching its status in the shot priority, this is not the way to go about it. 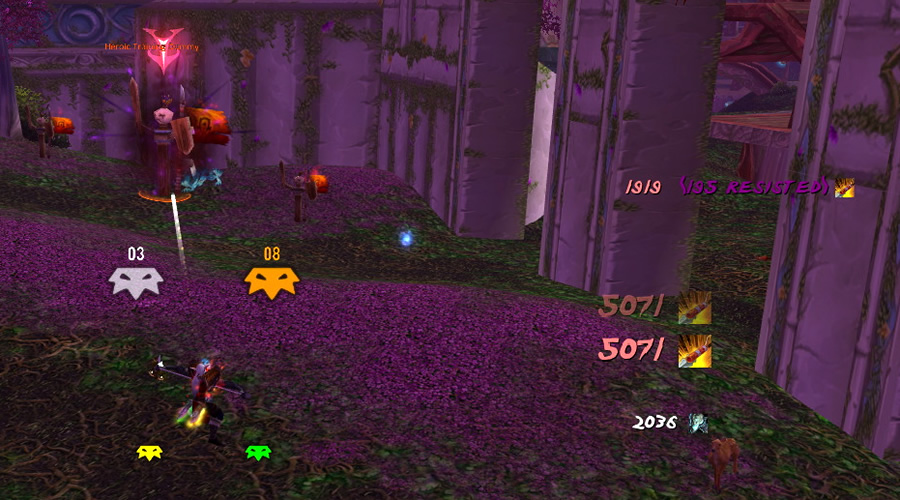 As you can see from the screenshot above, my Explosive Shot critted for over 5k on two of its charges. Fully raid buffed, the number could easily be 7K+. This helps to illustrate why it’s so important not to overwrite the final charge of an Explosive Shot.

Since Explosive Shot requires 2 full seconds to do all of its damage, by spamming the shot during Lock and Load, you run the risk of overwriting the final damaging charge with a fresh Explosive Shot. This is because the global cooldown is only 1.5 seconds in duration.

How to handle this? Easy… wait a half second after your GCD is up before firing another Explosive Shot. By simply waiting .5 seconds after the global cooldown refreshes, you’re allowing your Explosive Shot to release its final charge.

One common misconception, (and one I’ve been guilty of in the past) is thinking that it’s beneficial to squeeze another shot in between the 3 casts of Explosive Shot. While this may seem like a good idea, since you’re not delaying the use of your GCD, it actually results in a DPS loss. The reason for this, is because you’re actually pushing back the availability of Explosive Shot by one full second, or perhaps even longer if you should cast a non haste-capped Steady Shot in between.

Casting another shot after Explosive during a Lock and Load proc means that you’ll be resetting the global cooldown, forcing you to wait 1.5 seconds before the next Explosive can be cast, as opposed to only .5 second had you simply waited.

Ideal rotation during a Lock and Load proc:

For players with high latency, or for hunters who are having a hard time getting used to timing the shots properly, the insertion of an instant cast ability in between is not the end of the world. It’s not the best way to treat Lock and Load procs, but it’s much better than overwriting damage ticks.

Forcing an Aimed Shot or Serpent Sting/Black Arrow (if they need reapplying) in between is not necessarily advisable, but it’s OK. Steady Shot could also be used in this case, but should be the last resort, as its cast timer will often exceed even that of the 1.5 second GCD for a SV hunter.

In PvP, the shot priority is a bit different in that Aimed Shot trumps all apart from Kill Shot. I would advise reapplying Aimed Shot if needed during Lock and Load procs. Tranquilizing Shot could also be used in between to knock off any resistances that might lessen the nuking power of your Explosive Shot.

I use two addons to help me manage my Lock and Load procs. One is Power Auras, and the other is SatrinaBuffFrame. Power Auras shows me when the buff becomes active and for how long. SatrinaBuffFrame gives me a handy little graphical timer which aids me in knowing when to cast my next Explosive Shot. 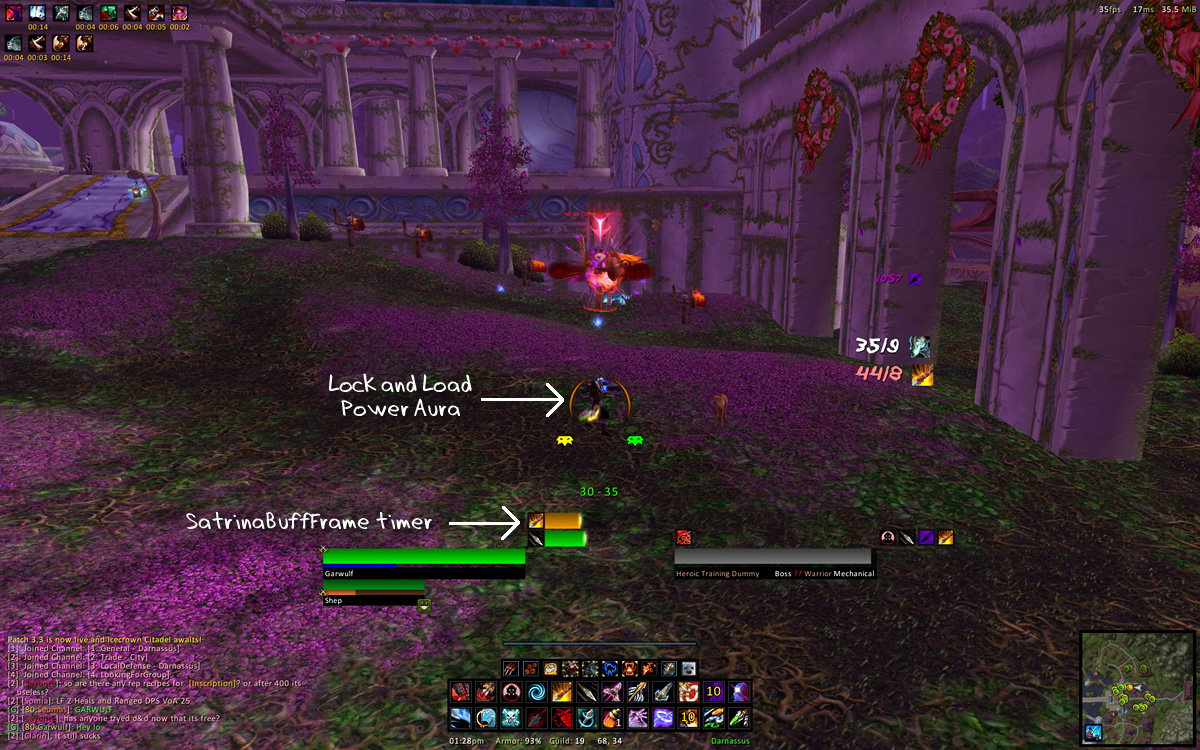 As soon as my first Explosive Shot hits, a timer appears that shows me how long until the last charge will be released. Just as the bar is about to expire, I know to cast my next shot. Since the shot does have a small amount of travel time, it’s best to cast the next one just before the timer runs out. Of course, this requires a low latency connection, as well as accurately gauging what that travel time will be (typically < .5 second).

I don’t necessarily think that either addon is necessary for managing Lock and Load, but they do help – especially the timer. I strongly advise the use of an addon like SBF or Quartz when learning to effectively handle Lock and Load. Eventually you’ll start to develop an inner meter by which you’ll be able to time the shots, but until then, use some training wheels so as to not gimp your DPS.

For those of you in the dark about Lock and Load or the amazing qualities of Explosive Shot, I hope this post helped to demystify some things. 🙂