Marksmanship is a great spec for raiding. Marksman Hunters are not only able to deal out large quantities of single target damage, but they’re also the kings of Hunter AoE.

The Pros and Cons of Raiding as a Marksman Hunter

All in all, Marksmanship has a lot going for it. It provides powerful single target damage, incredible AoE DPS, an insane raid wide attack power buff, and huge closing power at the end of boss fights. Because the spec brings a lot to the table, while not possessing a terribly difficult shot rotation, Marksmanship is a good option for players new to the class. It has less steep of a learning curve than that of Survival, so therefore it’s easier to try and maximize the spec’s potential early on. 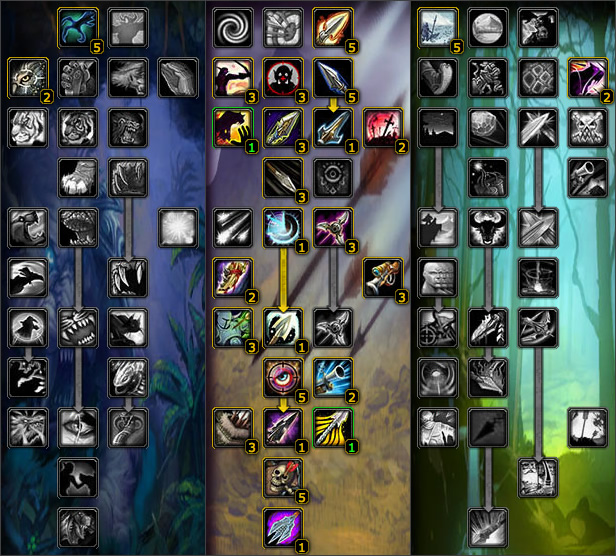 This is a good universal build for Raiding Marksmanship Hunters, provided you’re hit capped. If not, I recommend pulling points as needed from Improved Hunters Mark and putting them into Focused Aim.

Also… if another Hunter in your regular raiding group has Improved Hunter’s Mark, then drop the 3/3 in IHM and put them into Improved Barrage. Only one Hunter in the raid group needs to have the talent in order to benefit from it.

When 3.2.2 hit, it increased the amount of ArPen needed from 1232 to 1400 in order to obtain 100% armor reduction. This meant you’d now need 735 ArPen w/ Mjolnir, or 780 w/ Grim Toll. In other words, 168 more ArPen. Trying to reach that mark would force a Hunter to have to sacrifice a ton of agility, therefore compromising the overall effectiveness of the build.

Unless you’re rocking BiS, along with one of the aforementioned trinkets, you’re probably not going to see any real benefit from sacrificing agility in favor of Armor Penetration.

On the other hand, there is a point where a Marksman Hunter can drop Arcane Shot from their priority and see a DPS increase. The reason for this, is because Arcane Shot does not scale with Armor Penetration, unlike every other shot in the MM Hunter’s arsenal.

Even without gemming specifically for it, it’s fairly easy to obtain 350-450 Armor penetration solely through gear. Somewhere around this point is where dropping Arcane from the priority yields an overall DPS increase. Arcane Shot should still be used in movement heavy fights, but dropping it from the regular rotation can produce more damage with enough Armor Penetration. This also allows points to be moved from Improved Arcane Shot into another talent, such as Improved Barrage, Improved Hunter’s Mark or Improved Steady Shot.

This the build I would recommend provided you meet the Armor Penetration requirements to drop Arcane Shot from the priority.

For a concise article on this subject, check out Armor Penetration vs. Agility, Redux! over at OutDPS.

For the third glyph slot, I’d go with either…

Wolf is the best choice currently, solely for the Furious Howl buff. However, if you are not keen on using a wolf, then other possible suggestions would be:

This is the build I would suggest for a MM Hunter Ferocity pet raiding build.

It may look long and involved, but it really isn’t. Here’s how a normal boss encounter would go down:

*Arcane Shot can be dropped from the regular priority if the Hunter possesses the necessary amount of Armor Penetration. Currently ~350 or above.

Serpent Sting is refreshed by Chimera Shot, so you need not worry about keeping it applied. However, to maximize its damage along with Chimera’s, reapply it during attack power increasing trinket procs. Serpent Sting scales with RAP, so reapplying it during a trinket proc will net more damage from not only the subsequent ticks, but also from Chimera.

In the event of an Improved Steady Shot proc, try to use Chimera Shot to release the bonus. If it’s on cooldown, just keep spamming Steadies, delaying the use of Arcane Shot or Aimed Shot until Chimera is available. The 15% damage bonus and 20% mana cost reduction is too valuable to spend on Aimed, and definitely not for Arcane. This can sometimes be a difficult chore in the heat of battle, so an addon such as Power Auras can be beneficial here.

Use Readiness immediately following Chimera or Kill Shots for back-to-back goodness. After a Readiness, Kill and/or Chimera, Aimed, Arcane, Rapid Fire, back to Steadies…

Marksman’s shots are expensive, so this spec tends to drink mana a lot quicker than that of a Survival spec. Due to this fact, proper aspect switching is essential. The main issue of note here, is that you never want to cast Chimera Shot while in Aspect of the Viper. The reason for this is, Serpent Sting is an AP based ability. If you cast Chimera while in AotV, the refreshed version of the sting will tick for far less and yield much lower damage when it’s released after your next Chimera Shot. When you do have to switch into AotV, the best bet is to only use Steady Shot while you’re replenishing. Steady Shot is not only mana efficient, but it’s damage is split between weapon damage and RAP, thus it suffers less than some of the harder hitting shots.

For a good explanation on the mechanics of Serpent Sting and the dangers of Aspect of the Viper, check out Drackmire’s article here.

Silencing Shot is not on the global cooldown, so you can macro it in with other shots for added DPS.

If you’d like more control over when and if to cast it:

Up next… The Raiding Hunter: Survival

48 thoughts on “The Raiding Hunter: Marksmanship”