See this post in the Hunter Forums for a more up-to-date Cataclysm Beast Mastery PvE guide.

Beast Mastery is without a doubt the king of leveling and soloing specs. While it doesn’t have potentially the same degree of damage output as the other two Hunters specs, it still can be a very effective spec for raiding. If you like the idea of having a very powerful pet who can dish out almost as much damage as you can, then Beast Mastery may be the spec for you.

The Pros and Cons of Raiding as a Beast Mastery Hunter

Beast Mastery is a good option for players who want to play a less complicated spec with a simpler shot priority. Although it trails the other two specs in terms of DPS, it’s not as difficult to maximize the damage potential of the spec. Doing a better job of playing a lower DPS spec may be a better option than underachieving with a more complicated, higher DPS spec. Which ever spec allows you to produce the most damage is the spec you should go with. If you’re able to crank out more DPS as a Beast Master, then so be it. Raid as a Beast Master. 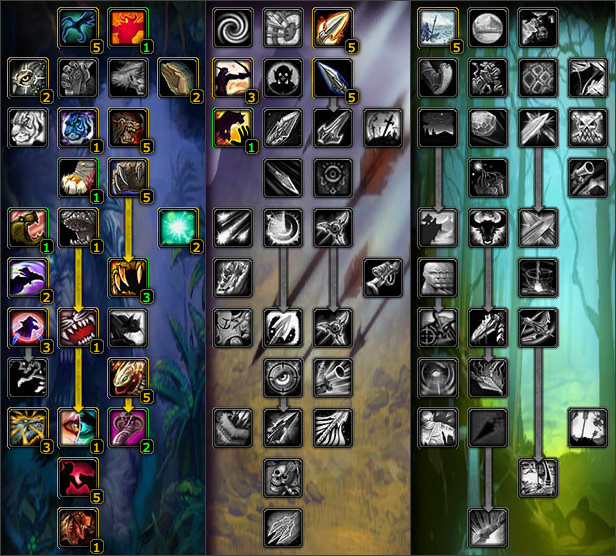 This is the BM talent build I would suggest provided you are hit capped and decently geared. If you are not hit capped through gear, then I’d recommend dropping the necessary points from Improved Tracking and placing them in Focused Aim in order to reach the PvE hit cap of 8% (263 Hit Rating).

Patch 3.2.2 introduced a pretty major change to the Beast Mastery tree when it altered the mechanics of Bestial Wrath and The Beast Within. Hunter damage was buffed, while pet damage was lessened. As a result, my suggested BM raiding build puts a little more emphasis on Hunter damage than builds I’ve suggested in the past.

Alternatively, I’d suggest a build like this one for BM Hunters who are just hitting end game and/or lack the necessary crit to maximize the damage of the aforementioned build. This spec sacrifices a few points from Mortal Shots and places them into Survival Instincts and Cobra Strikes. This build provides a little added insurance for your Cobra Strikes and Frenzy procs.

For the third major glyph slot there are a few options:

All of these glyphs provide around the same amount of DPS. Hawk provides the largest gain, but Glyph of Serpent Sting will make you a little more mana efficient, which in turn can lead to more DPS. Kill Shot provides more finishing power. Choose the one that suits you best.

Unless you’re already hit capped through talents and/or gear, the hit cap should be the first thing to consider when looking at gems and enchants. The current Hunter hit cap is 8%, which translates to 263 hit rating. If you’re Draenei or if you bank on always having Heroic Presence available in raids, then you can lower the necessary hit rating required to 7% (230 hit rating).

Once you’ve reached the hit cap, agility and attack power come next.

Even though raw attack power provides a higher DPS boost to pets than agility does, I’m going to recommend agility as the stat to stack. Here are my reasons…

Although attack power is still a slightly better stat for BM Hunters than agility, the difference is pretty negligible now with the recently changed BW/TBW mechanics. Unless you’re into min/maxing, I suggest gemming for agility over attack power in most cases. Chances are, if you’re into min/maxing, then you probably won’t choose Beast Mastery for raiding anyway. Unless you’re rich and can afford to regem after every respec, just go for agility in most cases. Well, with the exception of your 2H weapon of course. Make sure to throw attack power on your 2H, preferably Massacre if you can afford it. I’m also going to suggest Crusher for your gloves over the 20 agility enchant.

For maximum Beast Mastery DPS, the two pets to look at are the Devilsaur and the wolf. The Devilsaur provides the highest spreadsheet DPS of all pets, but the wolf is a pretty close second. Furthermore, the wolf is a lot more low-profile and less apt to annoy your raid group and main tank. In fights that involve a lot of movement, the Devilsaur will win out due to its higher personal DPS. In most cases however, both pets are pretty close, so go with whichever you prefer.

This is the build I would suggest for a BM Hunter Ferocity pet raiding build.

If you have the two piece Tier 9 set bonus, then I’d recommend switching it up to this:

Since Serpent Sting not only increases the damage of Steady Shot, but also does a s**t load of damage on its own with 2 pc T9, I’d make it the highest priority shot after Kill Shot, provided you have the set bonus.

The basic idea behind the Beast Mastery shot cycle is to fire Kill Shot as soon as it’s available, and after every cooldown. After Kill Shot, Arcane Shot and Multi Shot are our highest damage specials. When those three shots are on cooldown, you just need to sit back, spam Steady Shot and maintain Serpent Sting uptime on the target.

Note: If you’re finding that your mana pool is pretty shallow and not replenishing quickly enough, simply drop Multi Shot from your rotation. The penalty for spending more time in Aspect of the Viper is a greater loss than dropping Multi from your rotation. It’ll also allow you to swill a Potion of Speed as opposed to a Mana Potion during a long boss fight.

If you have an on-use trinket that grants attack power, then add it to the beginning of the macro. Just add: /use 13 or /use 14, depending upon which slot you have the trinket equipped. Alternatively, you can use the exact name of the trinket as well. ie: /use Loatheb’s Shadow

This macro helps to maximize damage by combining a lot of synergistic abilities within one macro.

Hopefully some of this info helps those of you who wish to raid as Beast Masters. Feel free to post your comments and questions relating to this guide, and I’ll try to respond to them as quickly and as thoroughly as possible.

Up next… The Raiding Hunter: Marksmanship