One of my readers contacted me in hopes that I might be able to offer up some personal assistance. This is something I do quite often in the form of e-mail replies and forum post responses, however, I decided to do something different this evening… I felt that it’d be a nice touch to take my advice to the front page of the site. Rather than bury it in a forum response, or in an e-mail that no one but he or I will ever see, I thought maybe a few others could get some value out of my advice as well. 🙂 END_OF_DOCUMENT_TOKEN_TO_BE_REPLACED

I saw this post late last night in the WoW Damage Dealing Forum, but was too tired to comment on it at the time.

The spirit beasts are not the real issue from our perspective. We think spirit beasts are doing fine and we don’t want them to be the only choice for BM hunters since speccing BM should give a player more choices for pets (ideally) and not less. The problem mainly lies with the wolf just being overpowered. We did consider nerfing them for patch 3.3 but decided that the nerf to pretty much all hunter PvE dps was not worth the benefit of providing more options for pets. Keep in mind though that we have and will continue to make unpopular or even controversial nerfs if we feel they are a benefit for the game.

Groan… What a load of crap.

First of all, wolves are not the issue here. The real issue here is that exotic ferocity pets need to be doing more f**king damage, especially Spirit Beasts. They’re 51 point talent pets, with a dps-only special… wtf..?!

If they were to really put the bat to them, all nerfing wolves would do is cause every hunter to switch to a raptor. Sure, some will go for wasps and maybe even cats, but chances are nearly every hunter currently using a wolf will just grab a raptor if it’s going to provide the best DPS. Now where’s your variety..?

Instead, why not show BM Hunters a little love and buff the pets that took them days, weeks or even months to obtain. Taming a Spirit Beast is no small feat for many, so there should be some sort of reward that accompanies it. Why not have them be just a little bit better. They don’t have to be the best, but they could at least be right near Devilsaurs. Makes sense to me.

BM is already behind MM and SV by a noticeable margin, so why not give hardcore BM Hunters a slight tip of the hat by making Spirit Beasts something more than just a vanity pet. It’s pretty sad that a pet which can take weeks on end of camping to acquire, provides less overall DPS than 2-3 different non exotic pets.

Beast Mastery is a 51 point talent, and Spirit Strike is a pure DPS ability. Why on earth should Spirit Beasts not be at least first or second in damage for Beast Mastery Hunters..?! /boggle

In my opinion, Blizzard has dropped the ball with Spirit Beasts. They should have either stopped with Loque’nahak, or introduced new Spirit Beasts with different abilities. Instead, they just keep reusing the same pet model with a new skin. It’s ridiculous.

At the very least… they should give hunters the option for additional stable slots so that the Spirit Beast “collectors” can catch ’em all. Hell… if they did that, I’d probably go grab Arcturis and maybe even Skoll, just for the fun of it.

I think the concept of Spirit Beasts was a cool introduction to the game for pet people such as myself. However, I feel the novelty is wearing off.

What I would like to see is a move towards more pet-specific skills. Each pet should mirror it’s normal counterpart in terms of abilities, but just make them a little bit sweeter.

Cats could have a “sepectral claw” attack that maybe ignores a portion of the target’s armor. Wolf SBs could have a ramped up howl that also does a small bit of single target damage along with the AP buff. Arcturis could be more of a tanky Spirit Beast with ethereal armor maybe, which gives him an increased chance to be missed, or something else along those lines.

Those are just rough examples, but I think they help make my point. Some variety ffs. That way, BM Hunters could have 3 or 4 Spirit Beasts if they so desired, yet all of them would be useful in some way.

I think as long as the devs are fine with BM being a distant 3rd from the other 2 specs in terms of DPS potential, they should at least indulge the die-hards with some added benefits like more stable slots or SB variety. It’s the least they could do.

It may not be great for raiding but is still good for leveling while both Marks and Surv are competitive for raiding. I wouldn’t expect any big changes for now.

So there ya have it. Beast Masters, don’t hold your breath waiting for buffs to your DPS. Blizz is fine with BM being a “leveling tree”. I know some of you that are quite proficient at Beast Mastery are able to do amazing things with the spec, but with gear and skill being equal, there’s just no competing with MM and SV.

Chances are, many of the Beast Masters that play the spec at a high level do so because they are into the pet aspect of the class. These are the same people that probably would go the extra mile to use a Spirit Beast if they felt it would provide more overall damage. Why not make this happen?

Rather than continue my diatribe against the probable upcoming changes to the Beast Mastery tree, I’ve decided to shift my focus towards finding ways to adapt to the new mechanics.

First, let’s rewind a bit and recap this week’s announcement(s) and the ripple effect it had at HuntsmansLodge.com…

On Wednesday, MMO Champion posted news of a change to the Beast Mastery tree that was data mined from the Patch 3.2.2 PTR patch notes.

My initial opinion of this change was somewhat favorable. Although the shortened duration for The Beast Within and Bestial Wrath left me a little sad, the 10% passive damage bonus seemed like a fair trade-off. From a PvPer’s standpoint, it wasn’t the change I’d hoped to see, but I was OK with it. I liked the idea of upping the spec’s damage as a whole by 10%, even if it did mean losing some time in god-mode.

Then, the other shoe eventually dropped…

Not long after this announcement came out, it had the PvP Hunter community in an uproar over the 8 second reduced duration nerf to TBW. This prompted GC to make a formal post in the Damage Dealing forum detailing the change.

In my opinion, the news was not so good…

It should be no surprise to anyone who has been on these boards for long that we’re trying to chill out abilities that convey offensive and defensive bonuses with the same button press. At the same time, BM damage was a little low and too dependent on the pet. With this change, hopefully, Bestial Wrath becomes more of a defensive ability while taking Beast Within will boost hunter (and just the hunter) damage at all times.

I call it more of a defensive cooldown because it now breaks all CC like a PvP trinket.

[…] “Send your pet into a rage causing 50% additional damage for 10 sec (down from 18). While enraged, the beast does not feel pity or remorse or fear and it cannot be stopped unless killed.”

The tooltip doesn’t say this, but it now breaks all forms of CC that a PvP trinket would break (including Cyclone, Sap, etc.).

“Increases all damage you deal by 10% and while your pet is under the effects of Bestial Wrath, you also go into a rage causing 10% additional damage and reducing mana costs of all spells by 20% for 10 sec (down from 18). While enraged, you do not feel pity or remorse or fear and you cannot be stopped unless killed.”

So the changes are:

These are the things that bothered me about this explanation…

Once I realized that the damage bonus was exclusive to the Hunter, this change left me reeling. Considering the factors involved, I quickly deduced that the PvE buff would only be realized in the form of a 2%-3% boost to DPS, but the collateral damage to BM PvP would be catastrophic. END_OF_DOCUMENT_TOKEN_TO_BE_REPLACED 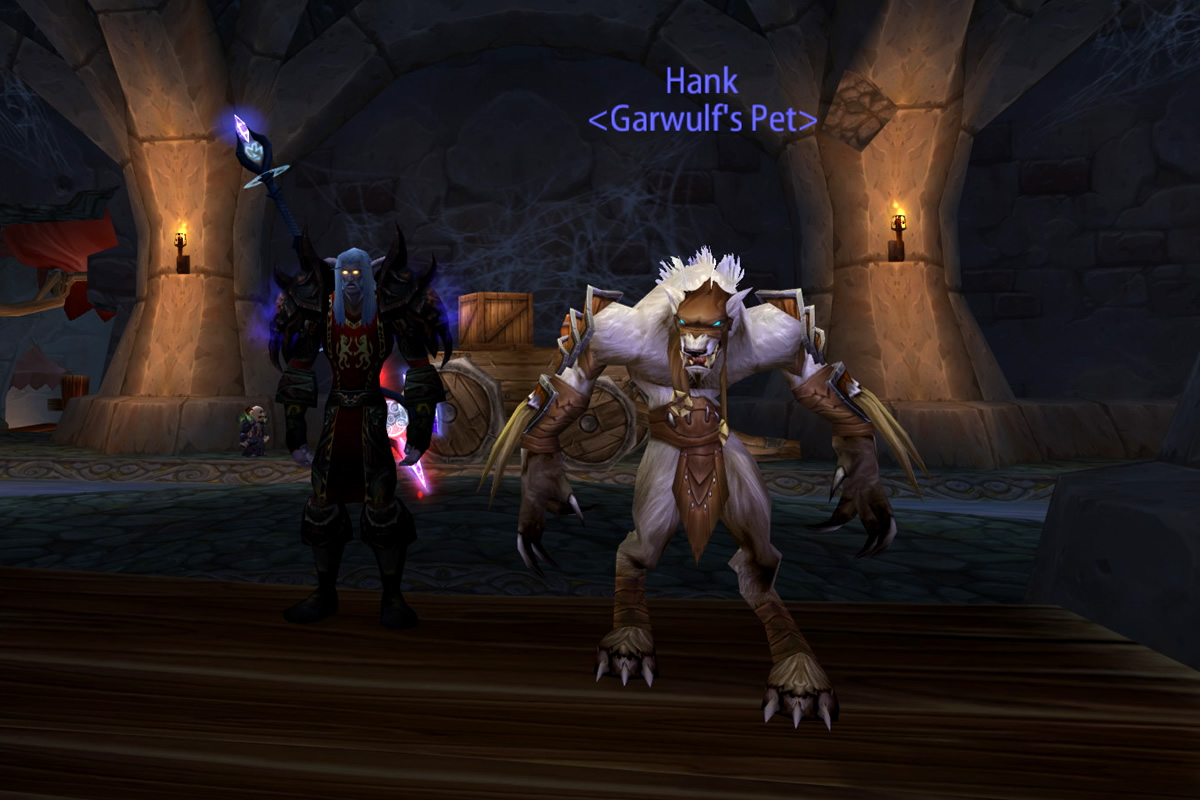 He’s gonna be hangin’ with me until Blizz applies a hotfix.

If any of you Hunters are interested in having a Worgen buddy accompany you on adventures, then stay tuned for more…

Update: 08/02/2010 – For an updated version of this guide, please refer to this page. It includes pet build information current through Patch 3.3.5.

Excerpt from one of Dalaila’s recent comments…

I’m currently using a wolf for raiding and I’d like to ask you what talents are you placing for maximum dps (ferocity). Got a tree/link?

You Betcha. I’ll do ya one better though… here’s a post about it. 😉 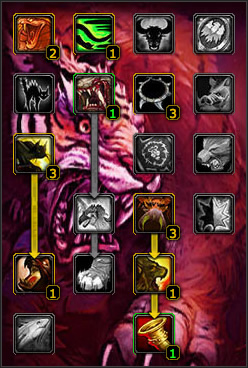 For when I raid as Marksman

Some Hunters go for Improved Cower over Bloodthirsty, but not me. Improved Cower reduces damage, but I’d rather not take a chance on the pet happiness. Both choices are fine IMO.

So there ya have it. That’s how I choose to spec my only non-exotic Hunter pet, my ghost wolf, for when I raid as MM.