I know I’m a little late to the party here, but I gotta say…I really enjoyed the Gara taming adventure. I had so much fun with it, I put together a map with some helpful tips so that hunters who still desire to add this coveted Spirit Beast to their stable might have an easier go of it. I’ll stop …

Alright, so today I was finally able to sit down and get myself acquainted with Patch 5.0.4. I’m still getting used to things, but overall, I’m having fun with the new hunter mechanics.

I still miss my melee weapons, but not from a practical standpoint – that’s more of a sentimental thing.

Being that I’m so programmed to try and maintain maximum range, the removal of the dead zone is taking some getting used to. It feels odd being able to use other shots besides Scatter Shot when enemies are right up on me. I keep having to remember I can shoot someone in the face with Arcane when they’re up in my grill. I’m definitely not complaining about this, however.

I’ve specced Beast Mastery, of course. It feels very good in 5.0.4. Almost too good. Things aren’t exactly balanced right now, so I won’t be holding out thinking it will stay this way.

Patch 4.3 is set to hit live servers this Tuesday. Patch 4.3 is a mondo patch chock full of new content, including: a new raid, new 5-mans, the Raid Finder, Void Storage, Transmogrification, the new Darkmoon Faire and so much more… In addition to the massive amount of content being added, there are also numerous updates and tweaks to class … 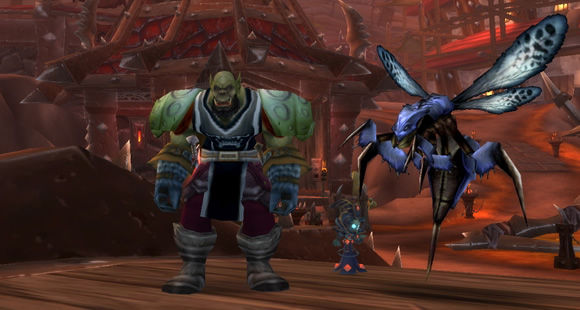 As my baby Orc was making his way through the 50s, I decided to start thinking about a new pet choice for the 50-59 PvP bracket. I’d been using a wolf up until then, mainly for the added 5% crit, and for the fact that I just like the idea of an Orc running around with a snarly Worg. However, as you level up through the brackets, life becomes harder and harder for hunters – especially for those of us not decked out in full heirloom gear. I felt that for me to be able to deliver the pain in the manner I’m accustomed to, I’d need a new pet with some sort of utility.

After a bit of research, I settled upon the wasp.