One of my readers contacted me in hopes that I might be able to offer up some personal assistance. This is something I do quite often in the form of e-mail replies and forum post responses, however, I decided to do something different this evening… I felt that it’d be a nice touch to take my advice to the front page of the site. Rather than bury it in a forum response, or in an e-mail that no one but he or I will ever see, I thought maybe a few others could get some value out of my advice as well. 🙂

I spend a great deal of time in that forum on a weekly basis, but I feel like only a portion of my visitors ever venture in there. Therefore, a lot of my hard work and in-depth answers go unnoticed by many – same goes for some of my lengthy post comments. This post is an example of me working hard and smart. 🙂

At any rate, today’s post is in response to a forum thread started by a level 76 Night Elf hunter named, Slugbait. Slug may be brand new to WoW, but nevertheless he’s an enlightened individual with impeccable taste. This I’ve determined by his decision to focus on the hunter class and nothing but. 🙂

Slug’s been enjoying the whole WoW hunter experience, but he’s been a little disappointed with his DPS contribution in dungeons. Being the helpful hunter I’ve always set out to be, I’m going to try and lend my hunter brethren a hand here.

Here’s a link to Slug’s armory, which may or may not be congruent with this post depending on when you catch it. Slugbait’s still leveling, so his gear will no doubt be rotating over the next few weeks (or days rather, if Slug’s a power-leveler). Anyhow, he’s hoping that myself and some of you other helpful folks out there can get him on the right track to producing, as BRK would say…. MQoSRDPS, i.e., Massive Quantities of Sustained Ranged DPS. 🙂

Here’s Slugbait’s forum post if you want the full introduction.

Alright, well I’m going to kick off this discussion… let’s get down to business…

Slug… by the time you hit Icecrown Citadel, Ya gonna eat lightning and crap thunder..! 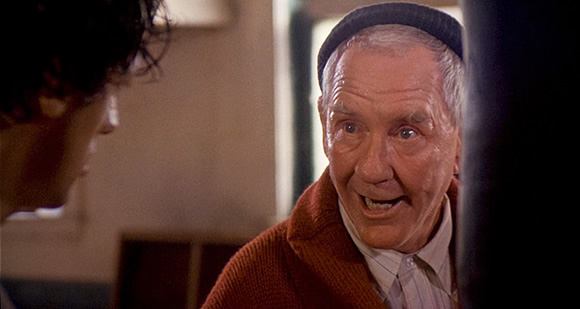 Gear’s not a huge concern at 76, just so long as everything has stats useful to hunters. Slugbait’s gear looks pretty good for the most part, but there are 4 pieces I’d recommend he replace sooner than later.

Painted Wooden Beads of the Beast – This necklace has strength on it – a no-no for hunters. All strength does is buff the hunter’s melee attack power… bleh. In addition to that, it’s an Outland level 65 BoE. 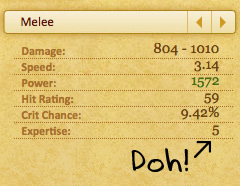 Reinforced Caribou-Hide Boots – These may look like pretty good hunter boots, but they have expertise rating on them. Another useless stat for hunters. It’s possible they were the best boots he could equip at the time, as they still have other good hunter stats, but now that I’m on the case, these gotta go.

Rigid Tuskring – Same story here as the boots… This ring has expertise on it, as opposed to something useful such as crit rating.

Fetish of the Fallen – This is itemized alright for hunters, but it’s a pretty weak trinket for a 76 hunter. 2 or 3 ticks of Spirit Bond are equal to the on-use effect of this trinket. There are much better trinkets available at this level.

Here are some easily obtainable upgrades that can replace the aforementioned items, and best of all… they’re free! All of these items can be had via quests.

I suggest going with Icewalker as the boot enchant. It has tremendous stats (12 hit/12 crit), plus it can be bought at the auction house for a song.

I almost forgot about one very important upgrade… a ranged weapon. No other upgrade he gets will have as much of an impact on his DPS as a new boomstick will. Having said that, this quest rewards a choice of bow or gun – both of which are great, depending upon what stats you need. Either one of these will do you until 80. The entire quest chain can be completed solo, but there are a few steps. I’d suggest getting going on it immediately. To get started, go to the Nesingwary Base Camp and pick up the Mastery quests. Completing those will eventually unlock this final quest which will award a nice ranged wep. 😀

While still leveling, there’s no reason to go all-out with the best gems and enchants, but I think Slug knows this. He’s got good, yet practical enchants. No sense in putting 10 stats on a green chest, right..?

For advice on gemming and enchanting, please have a look at the following guides. Hunter Gems / Hunter Enchants

Here’s the setup that Slugbait is rolling with right now… 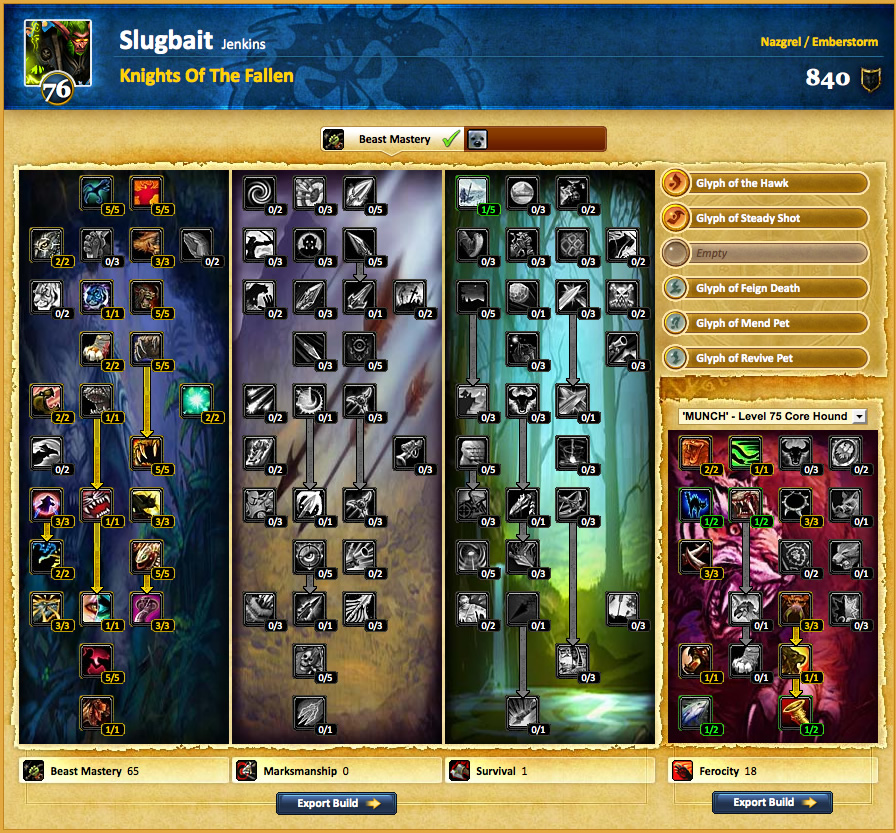 If Slugbait wants to keep dungeoning as a Beast Master, then I’m going to recommend that he respec to something that looks more like this: 53/14/0 BM Build for a 76 hunter. 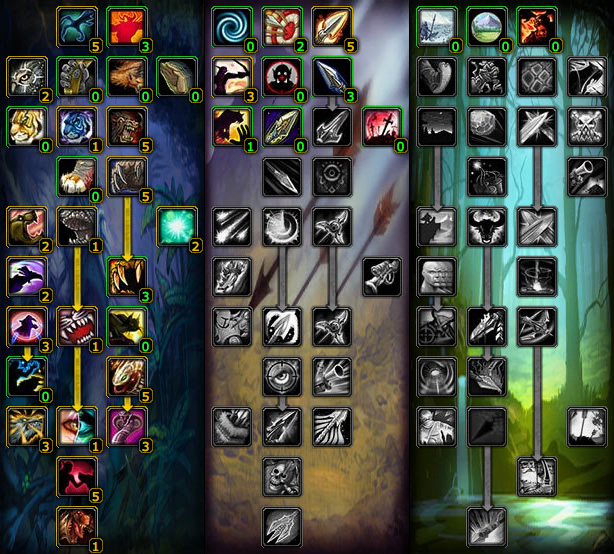 This build will be superb for leveling as well. He’s sacrificing what I consider to be a negligible amount of survivability and mana efficiency, for a huge improvement to hunter and pet DPS. He’s also a little light on hit, so we’ve put a few points into Focused Aim to sort that out.

As far as losing Invigoration goes… switching into Aspect of the Viper between pulls should be all that’s needed to keep from becoming mana-starved anyway.

I like his Glyph of the Hawk, but I’m going to recommend Glyph of Bestial Wrath over Glyph of Steady Shot. It will be more advantageous both for questing and for dungeons. Slug mentioned he was disappointed in his overall DPS contribution in dungeons. Here’s a tip:

That technique will provide AoE damage galore and make you look like a god for about 10 seconds. Use it when there are 3+ elite mobs.

With 3/3 Longevity and the BW Glyph, you can pull that little trick every 60 seconds (70 sec cooldown w/ 10 sec duration). Bestial Wrath also cuts down the Volley mana drain by half.

On bosses, use BW + Rapid Fire for maximum firepower. 😉

Since Slug’s just bought his dual spec and plans to go SV, here’s my recommendation… I suggest he use a SV build for dungeons and BM for everything else. SV is great for dungeons since it packs more punch than BM, but BM is a better route to go for leveling and questing. 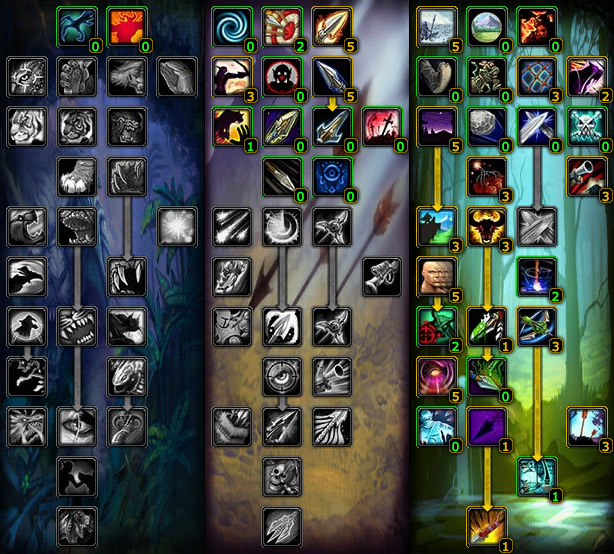 For glyphs I’m gonna suggest Explosive Shot and Serpent Sting. Exp Shot is a must-have and the Serp Sting I think could be argued, but I like it best for boss fights.

The SV build will produce more DPS provided he’s got his shot priority down and so-forth, but regardless, either build will be a major improvement to his current one.

Protip: Always make sure you’re attacking the same target as your tank. This will be especially important as your DPS starts to rise. The easiest way to do this is by setting your tank as the focus, then assisting him. This is best achieved by assigning a keybind to focus (via the Key Bind config), then creating a macro with /assist and keybinding it as well. I use F and G – it works great for me. 🙂 The only time you should attack a target other than the tank’s, is if one strays from the pack towards your healer and you don’t have any form of CC available and/or your tank doesn’t pick it up (i.e., sucks).

Slug’s using a Core Hound right now with his BM setup, which isn’t too bad, but I’m going to recommend a wolf. Regardless of whether or not he wants to instance as BM or SV, a wolf is where it’s at. Furious Howl FTW.

Slug’s trained Skinning and Leatherworking – two excellent professions for a hunter… exactly the same as mine I might add. 🙂 These are great professions not only because you get to craft your own armor from mats that you gather, but also because they both provide decent damage buffs. Skinning buffs crit through Master of Anatomy (~1% crit increase at 76), and Leatherworking boosts attack power (130 to be exact) by way of Fur Lining for your bracers.

Now granted these aren’t thee best DPS professions as far as the min/maxers are concerned, but we don’t care about that… What we do care about is that Slug gets his skinning maxed and his LW up to 400 (the level required to craft Fur Lining) as soon as possible. That’s cheap and easy DPS just lying on the table. 😀

Rather than re-hash what’s already been published on this site numerous times, I’ll instead just recommend some reading…

Here are some good guides on getting the most out of Beast Mastery:

I highly suggest reading through the macros and Power Auras pages as well. If Slug decides to go SV, Power Auras will be a huge help.

If Slug switches up his build and acquires some of the upgrades I’ve listed, he’s going to be making the lesser classes look like slackers in no time. I’m anxious to hear the results. 🙂

I hope this post has been useful to not only Slugbait, but to some of you other up-and-coming hunters out there.

If anyone has anything to add, please leave your comments and suggestions below.