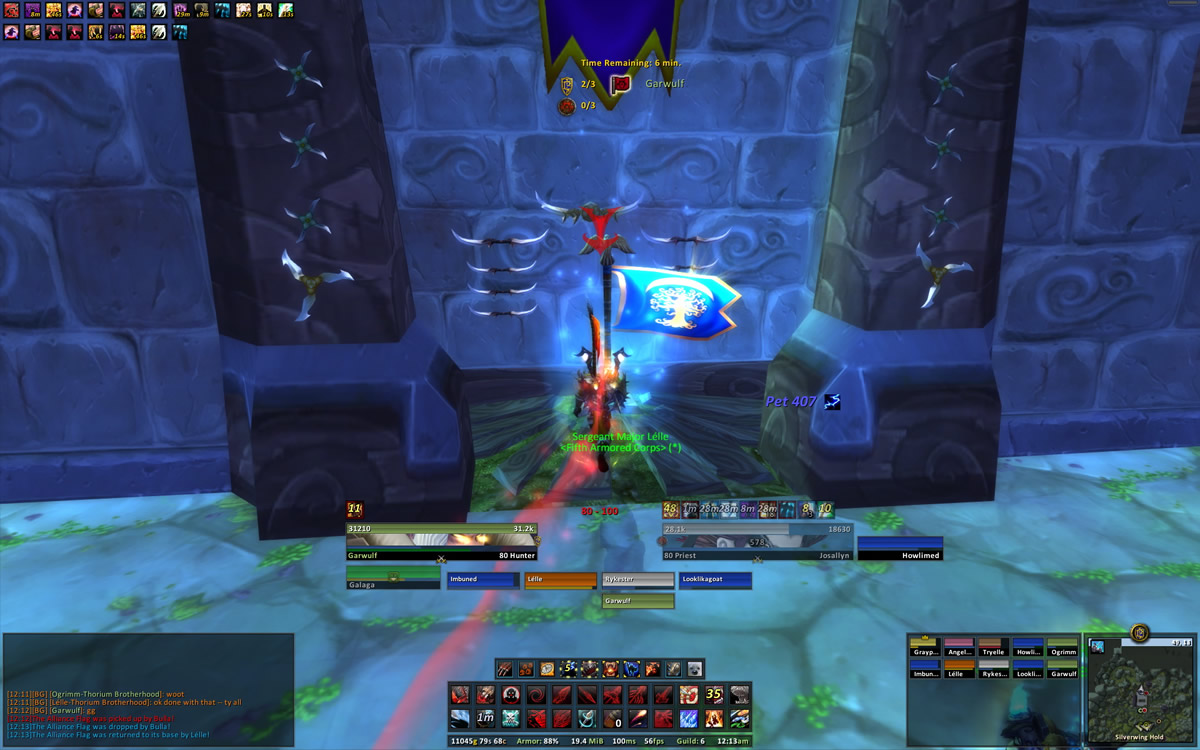 I don’t know about you, but I just loves me some old fashioned Capture the Flag. 🙂

Apart from the misfortune of being stuck in 2 battles with one of the biggest d**kheads I’ve ever played with, last night’s WSG marathon was a blast. I won all but 3 of the BGs I participated in, captured 9 flags, was extremely close to getting Ironman on two separate occasions, assisted another hunter in getting the achievement, and earned just shy of 1K rep with the Silverwing Sentinels. I’m making a push for Justicar, so I’ll be active in there tonight as well. I need about 6K more Silverwing rep and a Justicar I will be. 😀

Since the old school PvP ranks are being reintroduced in Cataclysm, I figure I could use a new title to go by in the expansion. Lieutenant Commander will probably lose some of its prestige once the new PvP system is in place and everyone is able to obtain those old ranks.

Warsong Gulch this weekend… see you out there..? I’m heading out there right now, so hopefully I’ll see some of you Vengeance peeps in the gulch. 🙂 I’m liquored up and ready to rock. 😀

Last week, Frost put together a really great video tutorial demonstrating the jump-Disengage technique. If you haven’t yet seen it, I highly recommend spending a few minutes to view it. Being able to master this technique is a huge advantage for a hunter, both in PvE and PvP.

There’s also another little nifty use for Disengage that you may not be aware of. As long as you’re in combat when you do it, you can jump from ridiculous heights and land unscathed by way of Disengage.

Here… I’ll show you how.

If you can master this technique it will not only help you survive in a lot of situations, but it will no doubt get under your enemies’ skin, especially if they try to follow you down. 😈 Imagine the look on the person’s face as they stare at the corpse release button, while you’re busy mourning their death, teabagging their corpse, planting your flag in them, or w/e your thing is… 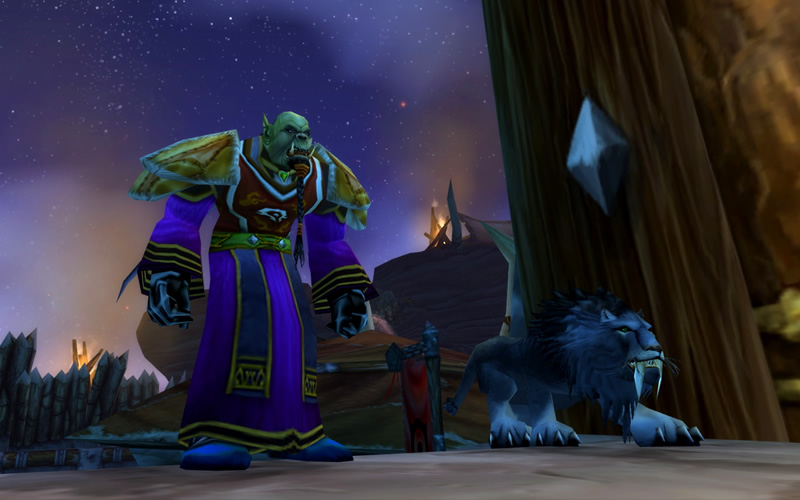 Or is that purplish..? Hard to tell…

When I rolled this character it was out of desire to explore the lore and different zones from a Horde point of view. While I have done my share of that, I’ve actually been having more fun just wreaking havoc in Warsong Gulch and Arathi Basin.

Last night I had the urge to scratch my PvP itch, only this time I did it For the Horde, and in the playground of the 30-39 bracket. I love low level PvP. Success in the lower levels relies so much more upon maneuvering and strategy than it does in end-game PvP. Gear and burst damage isn’t as much of a factor, which allows you to still be competitive as long as you play your class effectively and are mindful of the terrain. Now that twinks are largely absent from the experience rewarding BGs, it’s a pretty level playing field. Well, pretty level as long as the dress-wearing Orc isn’t your BG. 😉

I’ve fully explored the joy that is BG leveling, having gone from 25-29 and 34-39 mainly via BG experience. I just can’t get enough of it. 😀 Even though it’s the same old terrain and objective, it’s a new and exciting instance of play every single time. It’s also a nice way to get some decent gear as you level, especially since finding a Mara PuG isn’t always so easy, at least on my server.

As for me, I’ve been stockpiling my badges for the next bracket. The only item I’ve purchased so far has been the WSG staff. I’m thinking of going semi-big in the 40-49 bracket and hoping to surprise some would-be gankers in world PvP.

Well, what do you guys think of the patch so far? I don’t have too much to report. My evening consisted mostly of battlegrounds, including a rough series of games in which the Alliance acted as if Warsong Gulch was a new BG introduced in 3.2. It wasn’t until my fifth WSG that I finally got into a game where …