That said, if you’re just trying to decide which races are ‘the best’, then here’s a handy guide that can help you choose which race is best for your hunter, based upon which racial traits are going to help your hunter the most. To keep things simple, I’m mainly focusing on PvE and PvP. I figure anyone looking for ‘the best choice’ is doing so for raiding or PvP, however, if you are looking for the best ‘gathering’ hunters, then I can tell you that Worgen and Tauren are the best. 😉
END_OF_DOCUMENT_TOKEN_TO_BE_REPLACED

Well, it has been done. I have been thinking about making a faction change for awhile, due to various reasons. Drach has been a Draeni (or space goat for you racists) for as long as time. I got bogged down on my server, and was getting frustrated with many of the people I was dealing with, and one of the good friends in my life wanted to roll Horde, so it just made sense.

Drach is now an Orc! 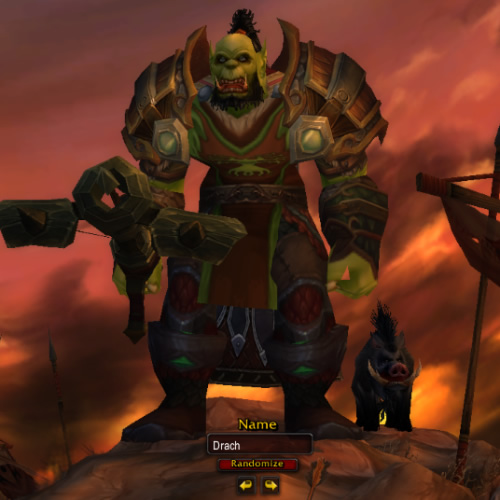 I decided to keep the name, because I like the name. 😉 Now the character may look different, but he’s still Drach. So far this has been a great experience. At least on my server, the Horde are much friendlier and less like a feminine hygiene product that rhymes with “spruce tag”.

I’ve joined a terrific guild with a great bunch of people with an emotional maturity greater than a high school student, which is always great. There is another Hunter in my guild, actually quite a few, but one in particular that took me under his wing when he heard that I recently made the switch to Survival spec. He took me to the training dummies and helped me polish up my rotation. It was a lot of fun. We’ve actually got a Baradin Hold run set up for tonight that I’m hoping to make it to. 😀

So, what’s the point of this article you may be asking yourself? Well, many of you from the forums know that this has been a consideration of mine for awhile now, but also I wanted it serve as a motivator to not get stuck in a rut.

If you’re frustrated or unhappy with what’s going on for you in game… consider a change like mine. I never thought I would jump factions because I felt tied in to where I was, but now I’m really glad I decided to make the switch! I want to encourage those of you who feel stuck to consider shaking things up a bit. I’m not telling you to hop factions, but why not try something new – whether that means going with a new spec, taming that rare that you’ve been dreaming of, or even starting a new hunter and trying a different race’s starting quest line.

The point I’m trying to make is… we all get stuck at times and feel like there is nothing we can do to change, but there is. The definition of insanity is doing the same thing over and over again expecting different results, so go out and shake things up a bit!

Although, I did get myself a little treat before swapping factions… I’m now a member of the SB6 club! 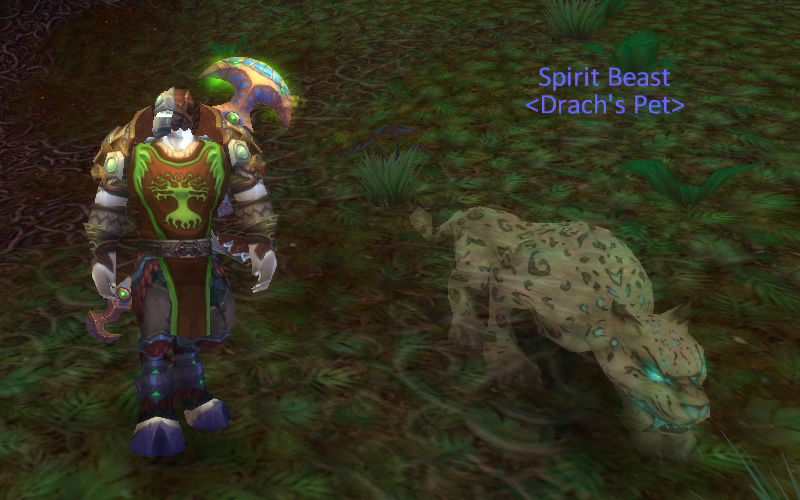 Day One of the Second Year In The Warchief’s Charge 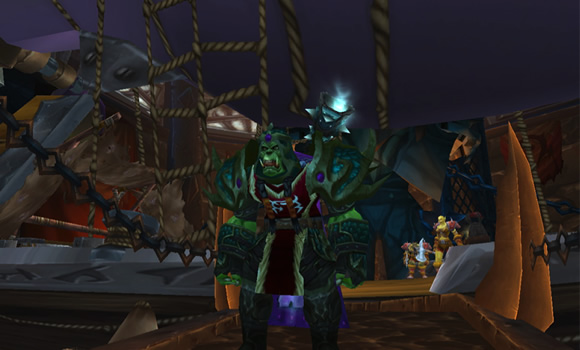 It has been a long, cold journey to Northrend…

Many of the soldiers on the journey with me have been severely frostbitten. A troll named Tar’jit fell asleep in the bottom of the zeppelin, never to awake. He had died of hypothermia.

I spoke with some of the other warriors in the Second Legion while we made the trip from Orgrimmar to Warsong Hold. One of them had been stationed in Dragonblight for a month before he’d been sent back to Kalimdor to be treated for wounds sustained while fighting at the Wrathgate. He spoke of the legendary empire of the undead Scourge, tales of behemoth spiders withering away from thousands of years of decay, and of the hated Lich King, Arthas.

He told many stories to those of us new to Northrend. Most were frightening tales, worse than any I had heard before. Nothing I had experienced during my tour of duty at Hellfire Peninsula one year previous would even come close to the horrors I was likely to encounter in Northrend.

Yet, there was one story of his that enchanted me… one that grabbed me… END_OF_DOCUMENT_TOKEN_TO_BE_REPLACED

Those of you that have been following my blog for awhile may recall that I rolled an orc hunter last year. In addition to the joys of leveling another hunter, I did this because I wanted to experience the game from the horde perspective before Cataclysm tears Azeroth apart. Although I’ve not played him much in the past couple of months, I must say I have thoroughly enjoyed the game as an orc.

Alright, so what’s he doing right now..? He’s working on getting his Arena Grandmaster. I’ve been very casually collecting them over the past several weeks and now have only four more to go.

Should I succeed, this will mark the second time I’ve soloed the chests for the Arena Grandmaster. The other time was on my then 19 Paladin a few years back. Of course, getting the trinket was less of a hassle a few years ago, because Blizzard hadn’t introduced the Arena Master achievement, which brought with it all sorts of unwanted competition from level 80s.

If I arrive at the arena and see some 80s waiting there, I like to sit back and see what unfolds. Last week I actually got lucky when an 80 Druid and 80 DK went at it over the chest. By the time the Death Knight dropped the Druid, he only had about 500 HPs left. I jumped down hoping to finish off his last few hundred HPs, but before I could, he died from the Moonfire DoTs still on him. 😆 It was a grand show, which then left an opportunistic level 49 Orc Hunter with unhindered access to the arena loots. 😀

I did a celebration dance afterwards, which ended when the DK rode back, Chains of Iced me and pounded my face in. I still had the last laugh though. 😉

My ultimate plan is to level this character to 80, but I’ve been having so much fun with him in the meantime, that I turned my experience off a few months ago. I hadn’t really planned on twinking this character, but that’s exactly what I’ve done.

Although twinking is all but dead in the PvP sense, due to experience gains via BGs (I’m on the fence over that change), there’s actually a new element of twinking that I’ve found to be pretty fun. This would be hardcore soloing.

Since we are able to turn off our experience now, it leaves us free to explore all sorts of challenging PvE content without the fear of leveling. Now some of you may say,”what’s the point in that..?

That’s what this game is supposed to be about anyway. It doesn’t always have to be endgame.

However, twinking is sort of like end-game without the wait. 😉

Stay tuned for more on my 49 Orc alter ego…

Since life outside the game has compromised my raid availability the past few weeks, I’ve been doing most of my Huntering on my low level Orc. I gotta tell you though… 40-49 BGs are a refreshing change from the end game grind. I’m also really starting to enjoy this whole PvP server atmosphere. It adds an unpredictable and exciting element of game play, that’s for sure.

Once I leveled out of the 30-39 bracket, I decided my next mission was going to be the taming of one of my all-time favorite rare pets. 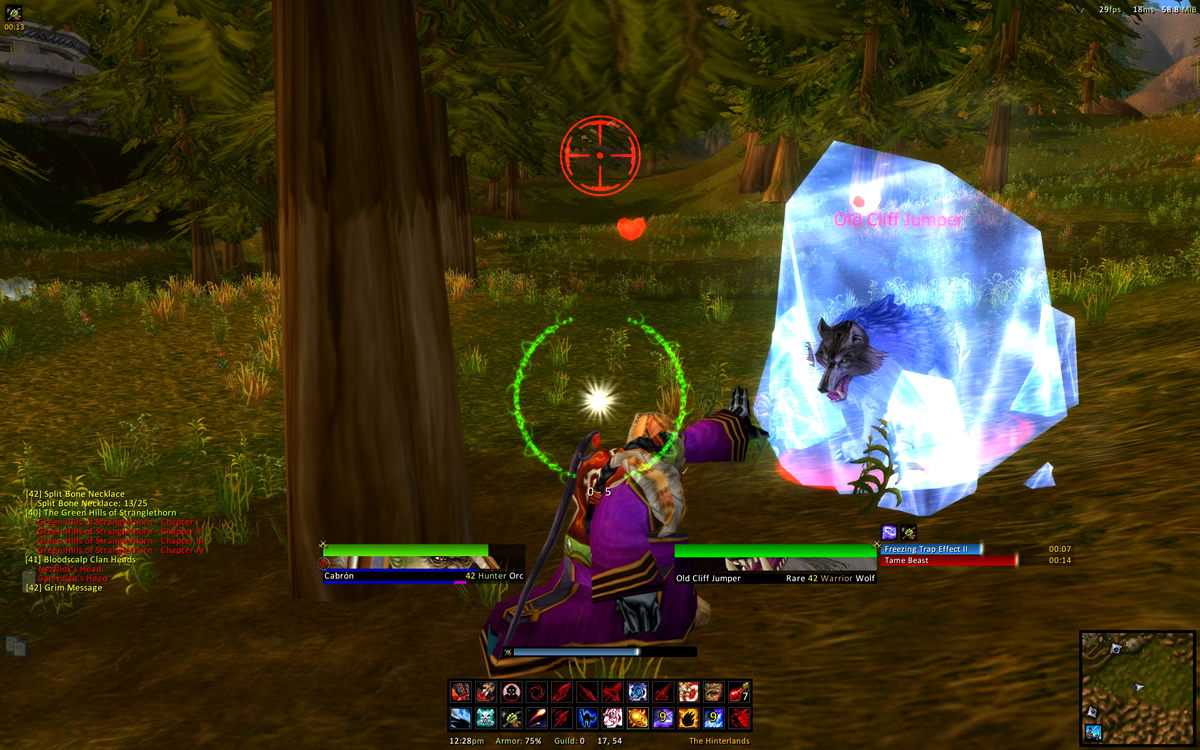 To me, he’s one of the coolest pets in the game. For one, he’s super rare. I can count on one hand how many times I’ve seen him with other Hunters over the years. He’s pretty tough to get because he spawns only 1-2 times per day, plus he’s in a high traffic area. This is only the second time I’ve ever tamed him, and I have to say it’s one of the more exciting “Old World” tames, especially for a Horde character. END_OF_DOCUMENT_TOKEN_TO_BE_REPLACED