Update: Unfortunately, I was unable to get a successful test install completed today. I only had time to give it one go, and some of the profile info didn’t update. I’ll try again tomorrow.

I’m very serious when I say I have had very little time to get this out. It was only through herculean effort that I was able to update the UI in the first place. I know it may seem like I’m dragging my feet, but know I am working my ass off trying to get a proper update available. I assure you that any free time I have to devote to WoW, the UI is top priority.

I’ve cleaned all of the .lua files (a very time consuming and painstaking process) and will give the installation another go tomorrow. We’re just about there.

I’ve zipped up the package and am preparing to run a test install on another machine. Provided all goes well, I should have this available later today. I just need to make sure the install is silky smooth first.

Wintergrasp is the closest thing to a raid that I’ve been a part of lately, so here’s an “example” raid layout with the damage and threat meters visible, as well as the raid frames. 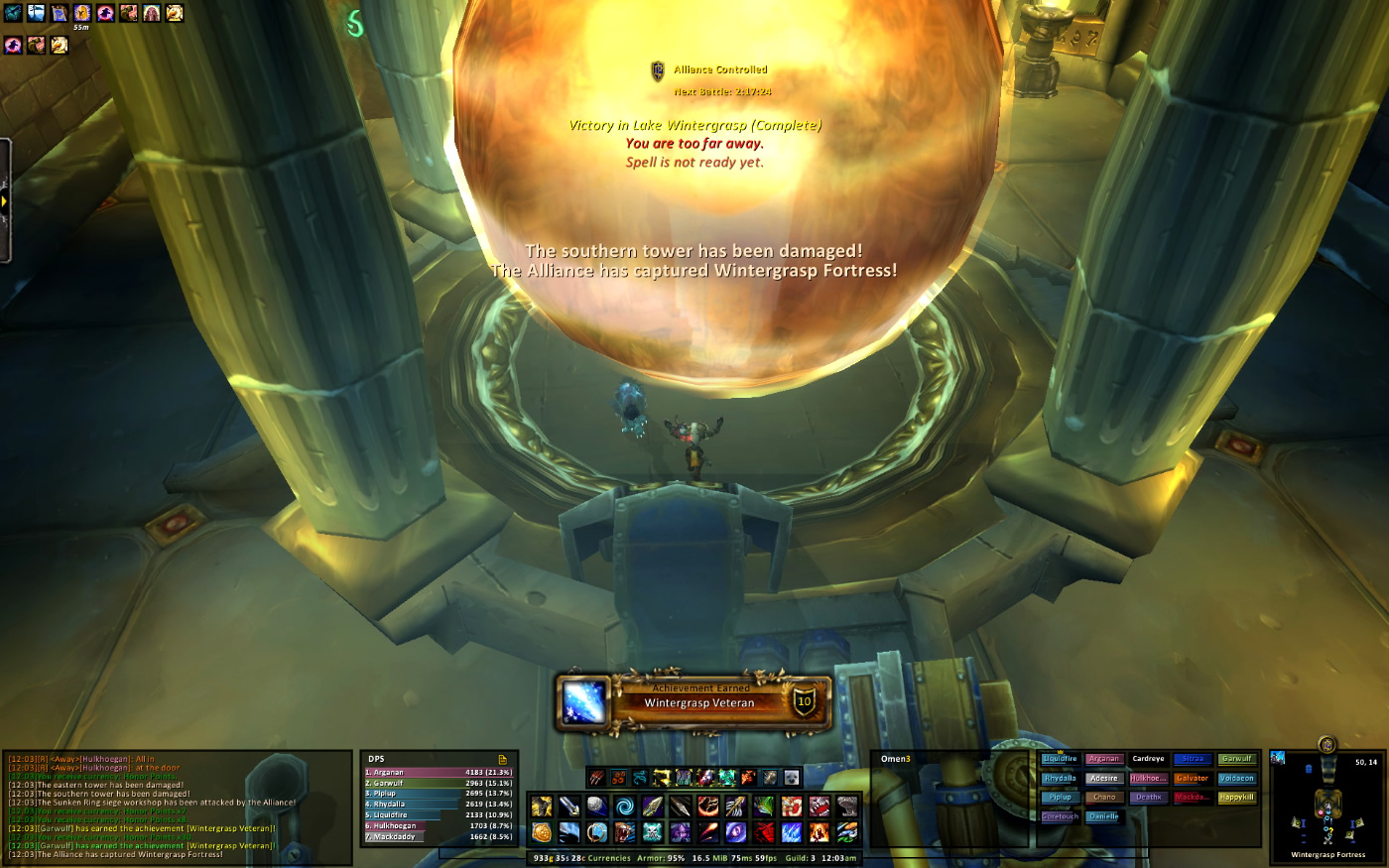 During one of today’s Wintergrasp battles, where we got our asses handed to us as we often do, there was one particular scene that struck me as comical. Now I’ll often have 5-6 Horde chase me down for the kill in Warsong Gulch or Arathi Basin, but I usually don’t have a whole posse on my trail.

With my four stacks of Tenacity, I charged over to the east workshop ready for business. This battle was particularly laggy at first, so before I could ascertain what sort of numbers we were facing, I was being Death Gripped down onto the road from out of nowhere. I fought my way back up to higher ground, then made a break for safety, hoping to regroup and plan another assault. END_OF_DOCUMENT_TOKEN_TO_BE_REPLACED

Garwulf sighed. It had been a long time since he last stood within the great ridges of the Ironforge Mountains. A chill breeze haunted the evening, and Garwulf shivered a bit. “I wonder what he is up to…,” he muttered, trailing off.

Turning back to head down the slopes, he whistled into the crisp air, beckoning his trusty companion. With a deafening growl, and a piercing howl, Loque’nahak appeared right next to him, as if out of thin air. “’Atta boy,” Garwulf said as he patted Loque’nahak on the head, giving him a scratch behind the ears. “I miss him as well.”

The two managed to get down the rocky crags with relative ease, using knowledge passed on to them in the past on how to watch for loose rocks, and find the hidden trails that one would normally not be able to see. The path before them led east, toward the great city in the mountain. Garwulf hopped on his mount, and strode at a blistering pace, navigating the winding trail that led to the city’s main gates. Passing the guards, giving them a slight nod, he continued on toward the center near The Great Forge, where the Gryphon Master stood, ever ready to provide transportation for those in need. END_OF_DOCUMENT_TOKEN_TO_BE_REPLACED

Boz took a deep breath as he stepped out of the portal and into the fresh air of Dalaran, taking a moment to rest on a bench near the central fountain. He stretched his arms wide across the bench and slid down, flopping his head back to look skyward, taking a long, deep breath. It felt good to clear his lungs of the rot that permeated Icecrown Citadel and the warm air felt wonderful on his skin as the ice melted from his spaulders. Though Sindragosa would no longer threaten the world, the Frost Dragon’s effects were not so easy to dismiss from his exhausted body so soon.

It was then Boz saw it descend and light upon the grass of the park: A steed woven with stars. They twisted and swirled inside its body, which seemed bound by the very essence of the universe. He rubbed his eyes with his thumb and forefinger, but there was no disputing the image before him, and its soft whinny confirmed what his eyes told him. On its back rode – of all things – the filth of the Horde. The same Horde that had that very day attempted to prevent his assault on Icecrown Citadel. Their pettiness in the face of obliteration was disgusting. How did they not see that the Alliance was trying to save everyone, Horde and Alliance alike?

The star pony seemed to agree with Boz, as it buckled under the weight of the fat Tauren stressing its spine. At least, he imagined it had a spine, or possibly a constellation. It was difficult to say, but he imagined briefly the pony’s cry for release; to be free. Where had it come from? What was it, exactly? His heart ached to help the poor animal. Cows were not meant to ride horses, let alone such a majestic creature! END_OF_DOCUMENT_TOKEN_TO_BE_REPLACED

Well, what do you guys think of the patch so far?

I don’t have too much to report. My evening consisted mostly of battlegrounds, including a rough series of games in which the Alliance acted as if Warsong Gulch was a new BG introduced in 3.2. It wasn’t until my fifth WSG that I finally got into a game where players understood the objective.

On one hand, the 20 minuted timed WSGs are nice for honor gain, but on the other hand it saddens me to know there won’t be any more epic slugfests in there. One of my greatest WoW memories was a level 19 WSG premade I was in a few years ago that lasted nearly three hours. I’ve had some great battles at 80 too, but that one will go down in history.

The change to Arathi Basin I think I like. Those games can drag on forever, which is especially painful if you know defeat is imminent. 1600 resources as opposed to 2000 for the win still makes for an exciting game, but it keeps things moving which is nice. Plus, it’ll make getting my tabard a little easier. 😉

I found that Rets were easier to kill last night. Even without my cooldowns I was able to escape them most of the time. That was a welcome change, aside from the fact that my 2v2 partners are Rets. 🙁 It’s going to be a little harder to run this setup for 2v2 in Season 7.

Aside from some BG’ing, I did a little dinosaur pet hunting. I was sort of hoping that maybe everyone would be busy with the new instances, BG, and Children’s Week, and that I’d have little competition for the rare dinosaur pet drops.

I flew to Wetlands first to try and get the pet off of the Razormaw Matriarch. All I saw when I got there were corpses of dead dinos strewn about.

Next I headed off to Un’Goro in hopes of finding the Ravasaur Matriarch. Same story. That’s actually the pet I really want since it will compliment Krush quite nicely. There were three Horde players there patrolling the area with undoubtedly the same intentions. That’s when I called it a night.

I did get a nice gear upgrade, for PvP at least. I picked up a pair of those fancy new ilvl 232 drawers from the Wintergrasp Quartermaster and tossed in a couple of the new epic gems. I’m hoping to get the new ring today.

Well there’s my report from the first day of 3.2. Pretty boring, I know. I’ll probably hit up Isle of Conquest tonight and see what that’s all about, then maybe check out Trial of the Champion tonight or tomorrow. Fun stuff.

In case you’re wondering why I didn’t mention Skoll… I suppose I’m over it. He eluded me on the PTR just as Gondria did, which made me think I’d have to get him on live, but I’m gonna wait and see if Blizz gives us more slots in a future patch. My stable is about perfect right now and I hate to disrupt it. I already have one Spirit Beast in there taking up a valuable stable slot, so I definitely don’t need another until we get a designated Spirit Beast stable. 😛

I’m also considering a radical change to Survival, and going BM/SV dual PvP specs. If I do that, then I may need a new non-exotic pet anyway. I’d hate to chase down Skoll, only to be forced with the tough decision of abandoning him shortly thereafter. The only reason I still have Loque’nahak is because I really don’t want to ever have to go through that taming process again. That, and he is the most attractive of the Spirit Beasts in my opinion. 😉

For those Hunters that were lucky enough to nab this new Spirit Beast, link me your screenshots and send me the coordinates. In the spirit of Hunter fellowship, I’d like to get an accurate and updated map so to help others in their taming adventures. Plus, since I won’t be going out to tame him just yet, it’ll give me a chance to “hunt” vicariously through my site visitors so to speak.