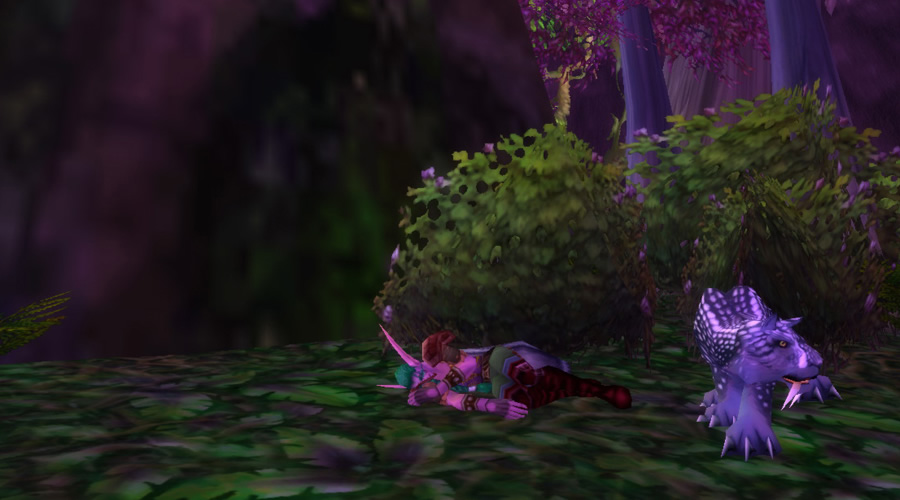 It was a cold, harsh morning in the shoreline boughs of Teldrassil, rain trickled through the lofty canopy above, hitting Azsunei softly on the head as she laid by her saber… asleep.

No sooner had a strong gust of wind echoed through the bough, Azsunei was up and looking out over the sea as the rain pelted her soft, purple coloured face. Her ears twitched as Asora, her saber, came to stand beside the shoreline. END_OF_DOCUMENT_TOKEN_TO_BE_REPLACED

Garwulf sighed. It had been a long time since he last stood within the great ridges of the Ironforge Mountains. A chill breeze haunted the evening, and Garwulf shivered a bit. “I wonder what he is up to…,” he muttered, trailing off.

Turning back to head down the slopes, he whistled into the crisp air, beckoning his trusty companion. With a deafening growl, and a piercing howl, Loque’nahak appeared right next to him, as if out of thin air. “’Atta boy,” Garwulf said as he patted Loque’nahak on the head, giving him a scratch behind the ears. “I miss him as well.”

The two managed to get down the rocky crags with relative ease, using knowledge passed on to them in the past on how to watch for loose rocks, and find the hidden trails that one would normally not be able to see. The path before them led east, toward the great city in the mountain. Garwulf hopped on his mount, and strode at a blistering pace, navigating the winding trail that led to the city’s main gates. Passing the guards, giving them a slight nod, he continued on toward the center near The Great Forge, where the Gryphon Master stood, ever ready to provide transportation for those in need. END_OF_DOCUMENT_TOKEN_TO_BE_REPLACED

…apart from the foul circumstances that prompted it.

One of my long-time WoW buddies returned this past week to say hello after nearly six months away from the game. He’s currently serving in the US Army over in Iraq, and has not been able to play due to latency issues, nor really wanted to play due to the glaring time zone conflict.

Anyway, he’d received some alarming e-mails from Blizzard indicating that something was afoul with his account. He logged in to find that he’d been hacked. As I’d mentioned, they’re aggressively picking off members of our guild. The only consistency with the attacks being that none of the compromised accounts were using authenticators. END_OF_DOCUMENT_TOKEN_TO_BE_REPLACED