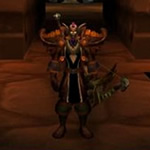 Let’s discuss an example from the last VoA 25 I PuG’d. END_OF_DOCUMENT_TOKEN_TO_BE_REPLACED 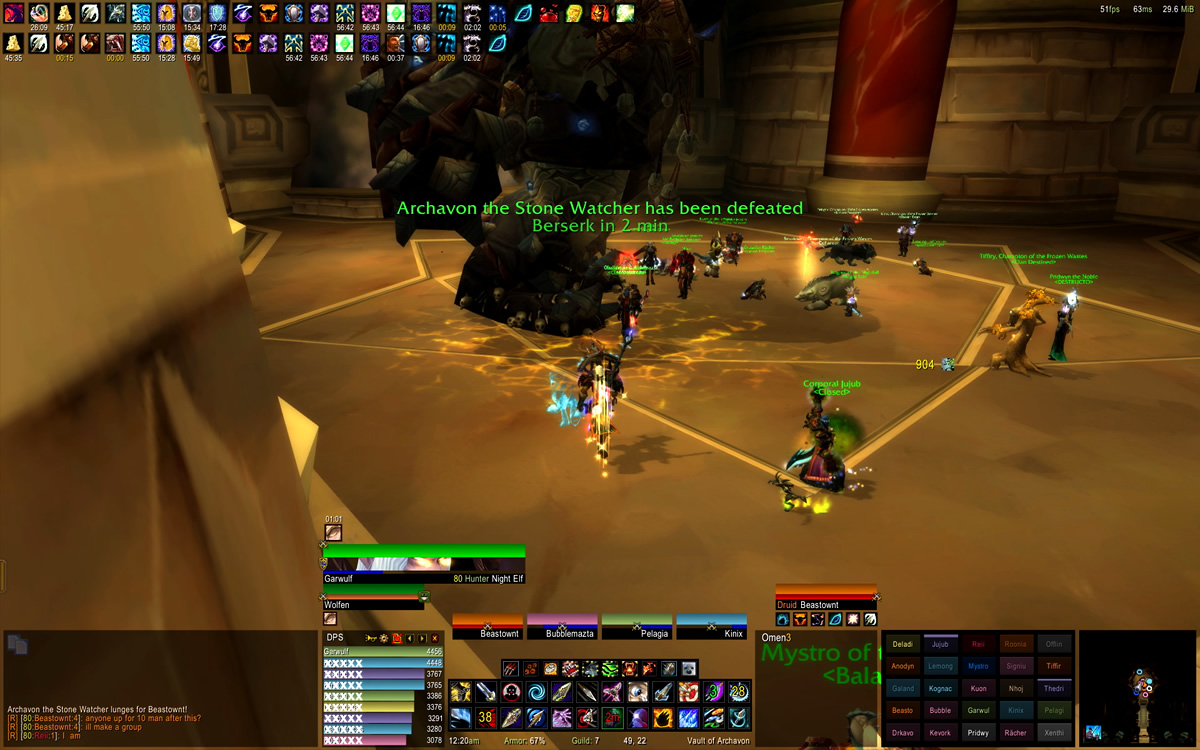 I’m still ironing some things out and improving what needs improvement, but here’s another look at my new UI. This image shows a little bit more than what was visible in my previous screenshot. 😉

As you can see, this screenshot reveals where Recount, Omen and Grid reside, as well as a few other features including: party frames, focus frame, pet buffs and my pet bar.

I’m just about done f**king around with it, so as soon as I get a chance I’ll show you the entire setup and explain why everything is in there, in addition to what it does.

I gotta tell you… I’m liking this interface quite a bit. It’s not vastly different from previous versions, but it’s further streamlined, leaner and meaner resource-wise, and it just looks bitchin’… at least I think so.

Next up, casting bars, target buffs and debuffs…

more on the way…

…is coming along nicely, but not quite ready for prime time just yet. It’s a full rebuild from the ground-up, so it may be another couple of days before I’m able to present it to you folks.

I took it for a test drive into a few battlegrounds last night, mainly to get Grid configured. For the life of me, I’ve never found a way to configure the look of it with all 10, 25 or 40 icons, without actually being in a raid. Maybe there’s a setting in there somewhere, but I haven’t found it.

Anyway, I’ve configured and installed most of the core addons. I’ve kept a few of my old addons, replaced a few with different ones, and found a few I’ve added.

I’ve tried other unit frame addons, but they all come up short when compared to Pitbull in my opinion. This time around I toyed with a new one called Shadowed Unit Frames because it has an arena addon, but it just didn’t cut it for me. Initially I liked it, but then I went back to my tried and true combo of Pitbull4 and Gladius.

I think a lot of people get intimidated with Pitbull and then move on to something else. It’s feature packed, so it does have a lot of customization options in the backend, but once it’s demystified it’s pretty simple to use. My goal is to outline some simple steps to get people up and running with Pitbull4 once I post my final UI.

I’ve tried Dominoes, messed with Trinity (or w/e it’s called), but Bartender 4 is still the champion of action bar mods. It stays as well.

I’ve been a Quartz man when it comes to cast bar replacement addons, but I’m trying AzCastBar now and I quite like it. Quartz is still a fantastic addon, but it hasn’t been updated since October of last year. AzCastBar does what I need it to and is super easy to configure.

If you know of a better chat addon, then please share. I messed with Chatter some this go ’round, but Prat is still in my eyes the best Chat addon out there.

I like Grid for its ease of use. Install it, position it, and bam! For a simple-minded DPSer like me it does all I need it to do. It shows me who’s alive, who’s dead, and who’s nearby. Pitbull4 offers fantastic raid frames, but I find Grid to be better for plug and play needs like mine. Disable Pitbull4 raid frames. Install Grid. Done.

This is a new one for me. I was always fond of Buffalo, but it too looks like another addon where future development is in question. Satrina Buff Frames is a popular choice for many, so I decided to give it a try. I am thoroughly impressed with this addon. It seems there’s absolutely nothing that this addon can’t do in the way buffs are presented.

Chinchilla is what I’m moving forward with for my mini map mod since it’s being actively updated. Apart from that, it’s also a nice addon. It has enough customization options to get your map looking sweet and presenting relevant information, but without too much extra fluff.

This would be my first inventory management addon ever, and I have to say I think I’ve been missing out. This addon is brilliant. I haven’t dabbled with it too much, but so far it does all I need it to and more, plus you can even customize the look of it somewhat.

Gladius is still the best arena unit frame out there. Proximo was great in its day, but it seems like a dead project now.

My previous experience with KGPanels consisted of implementing a 50% alpha background for my first real custom UI. Since then I’d not messed with it much since it’s purely for aesthetics.

However… this time around I’ve decided to revisit it. While I haven’t gone all crazy with it, adding custom artwork and such, it has definitely brought a nice added touch of slickness to my UI.

I don’t recommend KGPanels for everyone, as it takes quite awhile to get over the learning curve of configuring it, yet it has little in the way of return. It’s not going to improve game play one bit. But… if you’re like me and don’t mind sacrificing some playing time in order to have a better looking UI, then by all means go for it.

KGPanels is another addon I intend to offer a brief set of instructions for in order to get people up and running with it.

Alrighty, so that’s what I’ve gotten accomplished so far. I still have some more work to do with MSBT and Power Auras needs to be added. I’ve got a few minor tweaks left for my Pitbull party frames, then I need to look at some minor convenience addons, ie: clock, money, repairs, fps/latency, etc…

I’ll probably give it a few days of play before I get most the kinks worked out. I’m hoping to post screenshots on Friday.

Don’t expect the world with this one, but I am quite fond of it so far. 😉

For nearly two years I played World of Warcraft with absolutely no addons. I was a purist you might say. Once I began raiding however, my guild required me to have a threat meter and boss encounter alerts. Since I then had to install those essential 3rd party addons, I decided to see what else was out there.

To make a long story short, after about a year of trying various addons, I’ve assembled a suite of mods that I believe to demonstrate awesomeness at its finest. My UI is geared primarily towards PvP, but works equally as well for parties and raids. The emphasis is on organization and useful information during combat.

Since I played for the better part of two years without addons, I got pretty used to the default Blizzard UI. This is why I’ve chosen to keep the unit frames and mini map in their usual spots. I tried different configurations, but I prefer having those items at the top of the screen. A lot of people like to have their unit frames at the bottom either near their character or action bars, but I say go with whatever works.

The primary addons that I use to achieve this setup are:

Those are the addons that are responsible for the appearance of my UI. Just like anything else, these addons require a little work in order to tailor them to your needs. In my opinion though, it’s worth it to spend a little bit of time on something that will enhance your enjoyment of the game. I don’t consider myself reliant upon addons, but I’d prefer not to go without after having gotten used to them.

Other addons that I use which aren’t readily visible are:

Other than those mentioned, I use a few FuBar plugins that make life easier. These are things like auto repair, inventory management, fps and latency meter, clock, etc. After Wrath of the Lich King is live and provided my UI isn’t completely broken, I’ll post a detailed and itemized list of my current addons. If people are interested, I may even upload a zip file for others to download and install.