The other night I made mention of a few changes to my UI. Well here they are…

After using SexyCooldown for several weeks, it ended up I just couldn’t justify keeping it. Apart from looking really cool it just wasn’t doing all that much for me. I think it’s a great addon, but it was a bit overkill for my needs.

Instead, I opted to revisit NeedToKnow and found it to be a better fit for me after giving it a second chance. NeedToKnow was actually the first addon I looked at for measuring internal cooldowns, but I liked the fact that SexyCooldown was so easy to set up (and it looks awesome). However, I found myself not paying too much attention to it during boss fights, arena and BGs.

I am pretty much hard-wired for using OmniCC for monitoring cooldowns, so SexyCooldown was reduced to more of a luxury than a necessity for me. I think SexyCooldown is best utilized as an action bar replacement, provided all of your skills have keybinds. When used in that manner, it truly is sexy.

By getting rid of SexyCoolodown, I was able to move my unit frames down a bit, freeing up more space in the center of the screen. Since I’m only using NTK to measure 3 cooldowns, and I know precisely which ones they are, I was able to create a very low profile CD block to the left of my player frame. The module consists of nothing more than 3 colored bars with 3 timers. I also colored the cooldowns so they match the colors of their respective Power Auaras. No stone left unturned I tell ya.

I also replaced my Serpent Sting and Explosive Shot DoT timers with NTK. I had been using SatrinaBuffFrame for this purpose, but NeedToKnow is more practical for this application and a little easier to setup.

Thanks to Kripparian for making this awesome instructional video, and thanks to Mathew McCurley for this post which prompted me to give NTK another look. 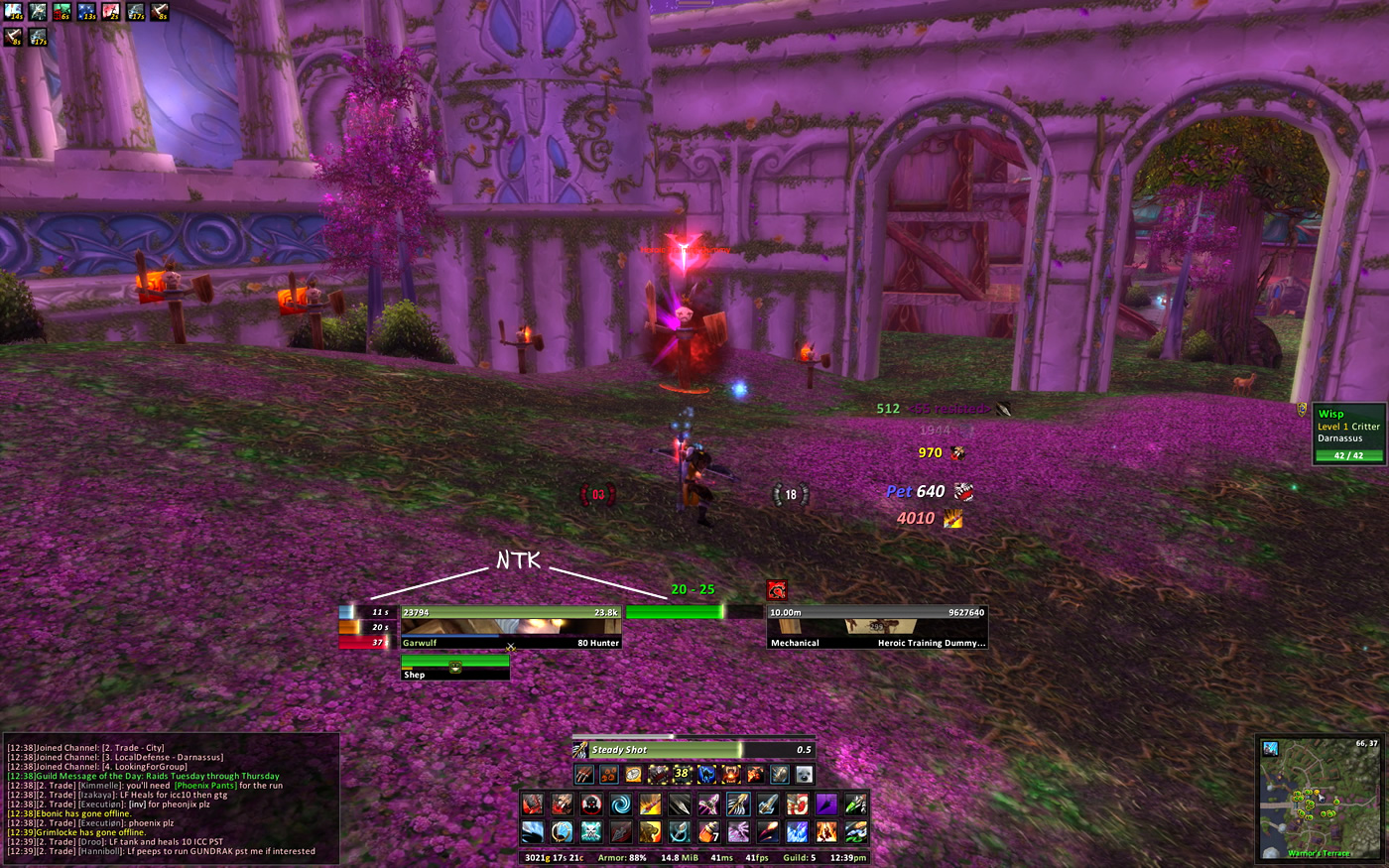 I think it’s safe to say that I am now officially done with my tinkering and will be planning on uploading this package today. 🙂

Apologies to anyone hoping to download my UI compilation last night. I tested out the installation on two of my characters, as well as one of my wife’s toons on a separate computer. Everything went like clockwork, but I wanted to run one more test, so I asked a friend of mine to install it on his machine. There were a couple of issues. Nothing major mind you, but I wanted to address them nonetheless.

The bulk of the problems were a result of his screen resolution. Since my UI was designed to work on a 1920×1200 resolution monitor, it’s only going to work out-of-the-box for those of you running at that res. However, I took some steps last night that should hopefully make adjusting it a lot easier for users with different resolutions.

Basically, what I did was parent and anchor the remaining KgPanels so that they would stay fixed to the various addon modules should they be moved. I also parented all of the unit frames to each other, so that they remain in balance should the UI Scale be modified.

While doing these things, I made a couple of other minor changes to improve things a bit, but with no drastic cosmetic overhauls of any kind.

My plan is to have it available on the site at some point today, but we’ll see how things go. I want to make sure that transitioning to my layout is as easy and seamless as possible. 🙂

Protip: Don’t dismount for a screenshot on the tallest spire above Dalaran unless… you’re an engineer, or… you want to experience mounted bear base jumping without a chute. 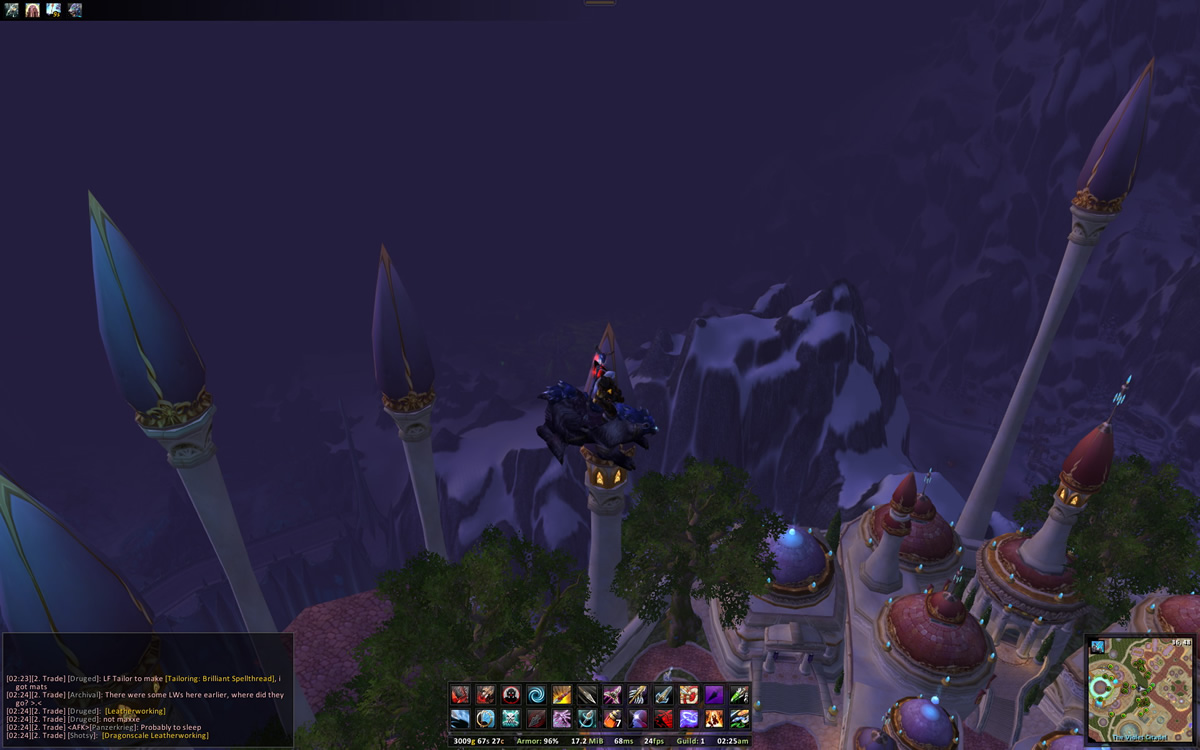 …is coming along nicely, but not quite ready for prime time just yet. It’s a full rebuild from the ground-up, so it may be another couple of days before I’m able to present it to you folks.

I took it for a test drive into a few battlegrounds last night, mainly to get Grid configured. For the life of me, I’ve never found a way to configure the look of it with all 10, 25 or 40 icons, without actually being in a raid. Maybe there’s a setting in there somewhere, but I haven’t found it.

Anyway, I’ve configured and installed most of the core addons. I’ve kept a few of my old addons, replaced a few with different ones, and found a few I’ve added.

I’ve tried other unit frame addons, but they all come up short when compared to Pitbull in my opinion. This time around I toyed with a new one called Shadowed Unit Frames because it has an arena addon, but it just didn’t cut it for me. Initially I liked it, but then I went back to my tried and true combo of Pitbull4 and Gladius.

I think a lot of people get intimidated with Pitbull and then move on to something else. It’s feature packed, so it does have a lot of customization options in the backend, but once it’s demystified it’s pretty simple to use. My goal is to outline some simple steps to get people up and running with Pitbull4 once I post my final UI.

I’ve tried Dominoes, messed with Trinity (or w/e it’s called), but Bartender 4 is still the champion of action bar mods. It stays as well.

I’ve been a Quartz man when it comes to cast bar replacement addons, but I’m trying AzCastBar now and I quite like it. Quartz is still a fantastic addon, but it hasn’t been updated since October of last year. AzCastBar does what I need it to and is super easy to configure.

If you know of a better chat addon, then please share. I messed with Chatter some this go ’round, but Prat is still in my eyes the best Chat addon out there.

I like Grid for its ease of use. Install it, position it, and bam! For a simple-minded DPSer like me it does all I need it to do. It shows me who’s alive, who’s dead, and who’s nearby. Pitbull4 offers fantastic raid frames, but I find Grid to be better for plug and play needs like mine. Disable Pitbull4 raid frames. Install Grid. Done.

This is a new one for me. I was always fond of Buffalo, but it too looks like another addon where future development is in question. Satrina Buff Frames is a popular choice for many, so I decided to give it a try. I am thoroughly impressed with this addon. It seems there’s absolutely nothing that this addon can’t do in the way buffs are presented.

Chinchilla is what I’m moving forward with for my mini map mod since it’s being actively updated. Apart from that, it’s also a nice addon. It has enough customization options to get your map looking sweet and presenting relevant information, but without too much extra fluff.

This would be my first inventory management addon ever, and I have to say I think I’ve been missing out. This addon is brilliant. I haven’t dabbled with it too much, but so far it does all I need it to and more, plus you can even customize the look of it somewhat.

Gladius is still the best arena unit frame out there. Proximo was great in its day, but it seems like a dead project now.

My previous experience with KGPanels consisted of implementing a 50% alpha background for my first real custom UI. Since then I’d not messed with it much since it’s purely for aesthetics.

However… this time around I’ve decided to revisit it. While I haven’t gone all crazy with it, adding custom artwork and such, it has definitely brought a nice added touch of slickness to my UI.

I don’t recommend KGPanels for everyone, as it takes quite awhile to get over the learning curve of configuring it, yet it has little in the way of return. It’s not going to improve game play one bit. But… if you’re like me and don’t mind sacrificing some playing time in order to have a better looking UI, then by all means go for it.

KGPanels is another addon I intend to offer a brief set of instructions for in order to get people up and running with it.

Alrighty, so that’s what I’ve gotten accomplished so far. I still have some more work to do with MSBT and Power Auras needs to be added. I’ve got a few minor tweaks left for my Pitbull party frames, then I need to look at some minor convenience addons, ie: clock, money, repairs, fps/latency, etc…

I’ll probably give it a few days of play before I get most the kinks worked out. I’m hoping to post screenshots on Friday.

Don’t expect the world with this one, but I am quite fond of it so far. 😉