I’ve never been so glad to see a Death Knight in a BG, that’s for sure. 🙂 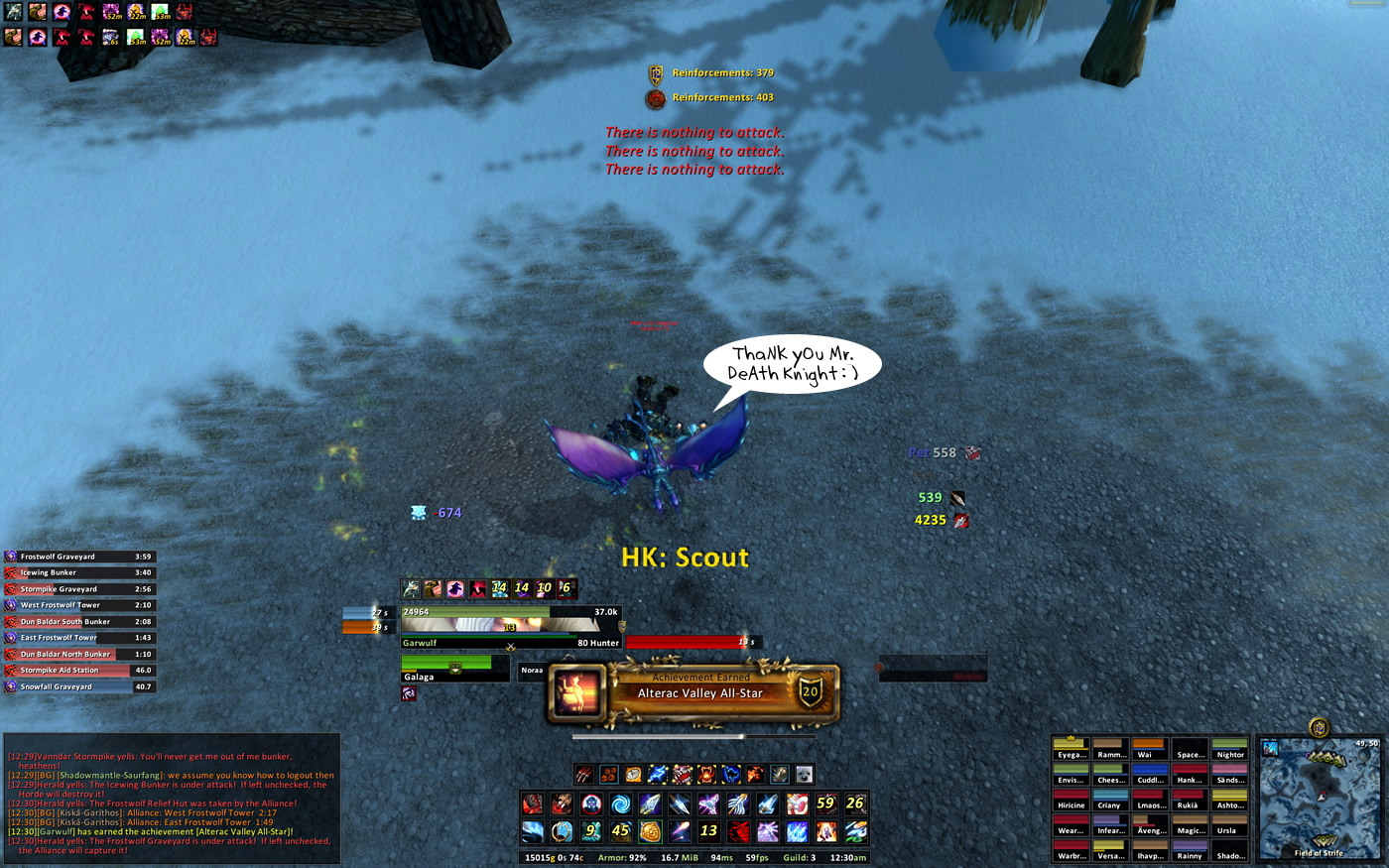 That achievement I recently earned is one of the more frustrating BG achievements in the game. The necessary steps aren’t overly difficult, however, trying to get them all done in time requires some hustle and a little luck.

Since trying for this one over the past week, I managed three times to get 4/5 during the span of the game. Regardless of which task I still had yet to complete, I could never finish in time. The other night it went like clockwork though… well, aside from the part where I was riding around in the Field of Strife, waiting for what seemed like an eternity, for a soon-to-be-victim.

The achievement we’re talking about here is of course, Alterac Valley All-Star. In order to get it, you have to:

All during the course of one AV… I don’t know about AV’s in your battlegroups, but 8 minutes would be considered a long match in mine. :-\

That’s a lot of running around you have to do in one Alterac Valley battle, and there’s a lot that can go wrong in that time. I’ve tried attacking this achievement a few different ways, but here’s what I found worked best…

The hardest part of this achievement is assaulting a tower, so the first thing you want to do is ride straight to Iceblood Tower – claim it and get that one out of the way. If you can’t get it, then you’re probably S.O.L. You can try for Tower Point, but getting the achievement I find is pretty contingent on being the guy who gets IBT.

Protip: Make sure to sick your pet on the tower guard just opposite the flag, otherwise he may start firing on you, causing interrupts to the cap.

Immediately after you cap it, head over to Iceblood Graveyard if it’s not yet been assaulted. Usually someone will have already grabbed it, but if you’re johnny-on-the-spot you might get lucky.

If you managed to assault the Iceblood Tower and Iceblood Graveyard, well… grats! You’re beating the clock and in the home stretch now.

If the Iceblood Graveyard was taken, then look to see if the Snowfall Graveyard is available… if it is, get after it. If no one’s claimed it by this point, it’s doubtful anyone will be there. If Snowfall’s been capped as well, then things will get a little tricky.

Our next step will be to head back to reclaim a tower and a graveyard, so now it’s on to Stonehearth Bunker.

If you are able to engage a horde character on the way – do so. Part of this achievement is downing an enemy in the Field of Strife, which you will be riding straight through. Provided you’ve managed a GY assault and now a FoS kill, all that’s left at this point is to re-take a tower and a graveyard. Sounds easy, right..? I’ve got news…

There’s a good chance that Stonehearth will have some defenders… if that’s the case, ride on and try to reclaim the graveyard. It’s a pretty safe bet that no-one will be guarding it – at least that’s what I’ve found. If Stonehearth Bunker is heavily guarded, then try Icewing Bunker. If it’s guarded as well, then just go with which ever tower you think you’ll have the best chances with.

When retaking a tower, always run in with Track Hidden on, especially if there are no visible enemies. Also be sure to drop a freezing trap on top of the flag just before the cap, as well as a nearby flare. Gotta keep those pesky stealthers in check ya know. 😉

If neither of them look promising, then you can either still try to Rambo one of them and take your chances -or- ride all the way back to Dun Baldar and hope to reclaim one of those towers. There’s also a good chance that the Stormpike Graveyard can be reclaimed if you have a graveyard defense still on your to-do-list.

However, only head back to Dun Baldar if you have already killed a player in the FoS. It’s unlikely that you’ll have enough time to complete all five achievements during the course of the battle if you have to spend that much time traveling back-and-forth. 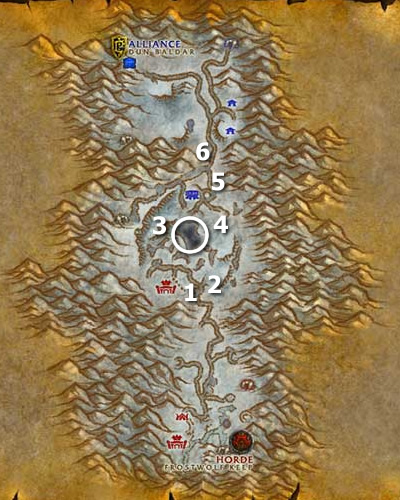 …all the while looking for a victim in the Field of Strife.

I’m sure some of you have other methods that have proved successful, but I gotta tell ya… you almost need everything to fall into place in my battlegroup. We won within about 30-40 seconds after taking the screenshot shown at the top of this post.

If anyone has any tips on how to succeed with this one as a horde character, please share.