Within 2 hours, I managed to get nearly 20% of the way through level 81. I knew leveling in Cataclysm seemed like it was going to be pretty quick, but sheesh… 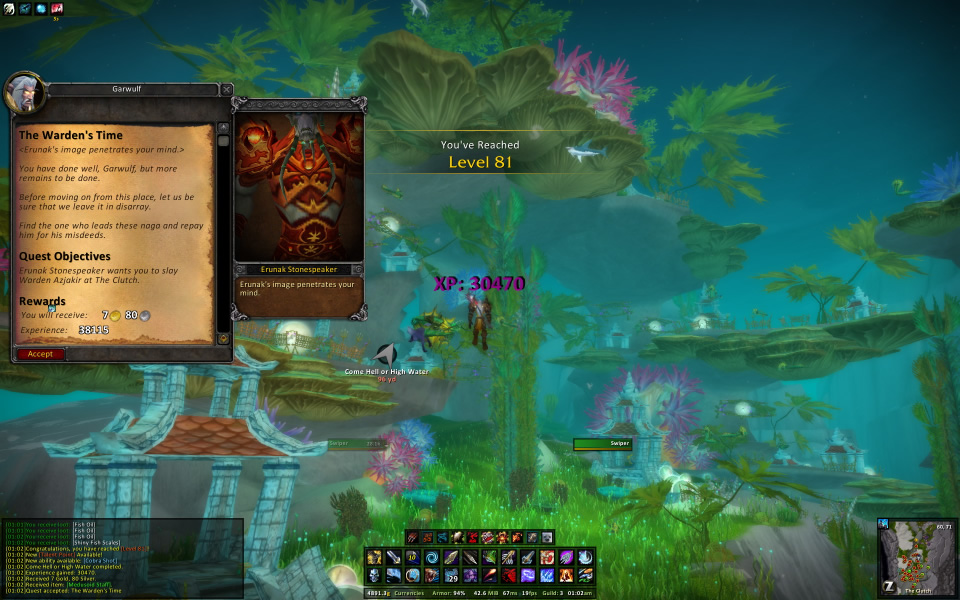 I chose to hit Vashj’ir first over Mount Hyjal, mainly because of Drach’s post. It just seemed like the right thing to do.

I’m not crazy about having to be fighting constantly underwater, but Blizzard has done an incredible job of “funning” it up. The increased movement speed, underwater breathing, and especially… my trusty sea-horsey mount, make the whole experience quite enjoyable.

The quests are quite amusing as well. Being eaten by a giant great white shark was quite comical, as was the “case of crabs” I obtained after visiting the chick in the cave.

So far, I’m really enjoying the 80-85 experience. I can’t wait until I’m all leveled up and able to go after some of the new beasties – namely Sambas and Ghostcrawler. Terrorpene‘s on my list as well, but based upon what I’ve read… I may want to bolster my HPs a bit before trying to get my tame on with him.

Oh! I want that rare-green-crazy-ass-alien-looking-bug-thingy too!

As far as which pet I’m using at the moment… Ashtail! Other than the minor annoyance of his Tailspin ability pulling additional neutral mobs, he’s been quite fun and unusual. It’s not caused me to bite it yet, so I’ll leave the ability on auto-cast for the moment, but I’ll most likely cycle through my stable as I level – giving many of my pets a chance to get out and stretch their legs, wings, etc… for a bit.

As far as my spec is concerned… I’m rocking a Marksmanship build at the moment. It seemed like the best way to go due to the insane amount of focus regen, along with some of the other little perks. So far it’s working extremely well. At my gear level, mobs are going down pretty easily – sometimes within two shots. Vashj’ir is my shooting gallery.

I like how they made Trueshot Aura passive! It’s not a huge deal, but still… one less thing to activate.

Tonight was my first go with MM since 4.0, so that’s been kind of fun too. As some of you know, I’ve been largely inactive the past few months, so I didn’t bother with too much “testing” of the new builds and what not. I played mostly as a Beast Master (still my 2nd spec), and dabbled a little in SV, but that was just before I went on my brief hiatus.

I think I’ll switch to Beast Mastery next time I get on and see how that goes. I can’t imagine it being more effective than MM, but at least it’ll give me a chance to level some of my exotic beasties.

Well… it feels good to get back to some huntering, along with experiencing the 80-85 Cataclysm content. =D