A couple of new BGs are planned for Mists of Pandaria, as well as a new Arena in Uldum.

Resilience Change in Mists of Pandaria

Also, resilience is going to become a base stat for all characters, which will be further buffed via gear for those that wish to PvP competitively. The resilience change will make it so that anyone will be able to PvP without the need for PvP gear, however, you’ll likely have better success if you’re wearing PvP gear. 😉 As it stands now, unless you’re a highly skilled DPS class in full high-end tier gear, it’s nearly impossible to survive a BG without PvP gear. This change will fix that. 🙂

New Battlegrounds in Mists of Pandaria

Blizzard has created concepts for three new possible BGs in Mists of Pandaria. It’s doubtful that they will add all three, but here’s a look at the ideas they’re kicking around at the moment.
END_OF_DOCUMENT_TOKEN_TO_BE_REPLACED 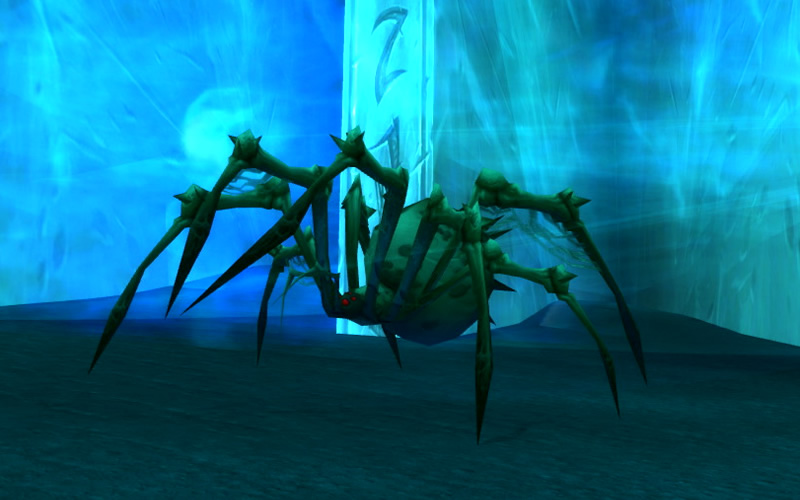 Bleh… no way am I going to roll with that as a pet.

Spider is one of the few pet types I’ve never used. For one, they used to suck up until Blizzard gave them their Web ability. Second, they just never remotely appealed to me as far as looks are concerned. Also, my wife’s not afraid of too much, but one thing that freaks her out more than almost anything are Black Widows. I’m sure she’d just love having me show up with my new creepy companion when helping her out with a group quest in Icecrown. 😈

Anyway, when I was playing around with MM for a bit in arena, I decided to say screw it… I’m gonna get me a spider. So what if I don’t like how they look, and too bad if my wife gets grossed out as she peers over my shoulder and sees me running round with this horrific thing in arena. After all, it’s just a bunch of pixels… it’s not real.

So, I moseyed over to Icecrown to locate me a level 80 Necrotic Webspinner. Alas, I found one, landed, then sat there… A few moments later I came to this conclusion… END_OF_DOCUMENT_TOKEN_TO_BE_REPLACED

I had every intention of sitting down last night and doing some power posting, but my wife was getting tells asking that I log on and help out our 10 man group in Ulduar. Having had a big time raiding jones lately, along with the need to put my new 212 DPS weapon to work, I answered the call. Following that, I spent about 2 1/2 hours in arena.

I’ve been jumping at the chance to get some playing time in now that my schedule has loosened up a bit. Prior to last Tuesday, I had only been able to raid 3 times in the past two months. I also hadn’t bothered with arena this season, but then I was approached by a Death Knight buddy to start a 3v3 team for fun and excitement. The idea is to go out and have fun, but try our little hearts out.

We recruited a Prot/Holy Pally from our guild to handle keeping us up. He’s new to arena and doesn’t have a stitch of resilience, but so far we’ve been able to remain somewhat competitive. I’m not looking to set the world on fire with our team, but if we have fun this season and get a few pieces of PvP gear out of it, then we will have been successful.

I’ve felt the need to blow off a little steam lately by playing, therefore posting has been spotty. However, I’ll try to make an effort to get some useful and/or interesting stuff on the site this weekend. 🙂