As I await the coming expansion, I’ve been having fun checking a few things off of my MoP to-do list. Most recently I went out and tamed one of those fancy dinosaur pets that the kids love.

I had been under the impression that taming a Direhorn required some sort of insane reputation grind, but that’s not the case at all. Many of you probably knew this already, but it’s actually quite easy. If you’ve been eyeballing the Direhorns and wondering how to go about getting one, I’ve put together a concise how-to for noobs like me.

2. Hop on your flying mount and head due north.

3. Swim to the island. Horde flight point is on the right, Alliance on the left.

4. Look for Dinomancers and grind them until you get Ancient Tome of Dinomancy.

5. Read the book and learn the spell.

6. Tame your Direhorn of choice.

Well, what do you think of Mists of Pandaria so far..?

What have you been busy doing since Tuesday morning at 12am..?

Normally I don’t jump right in to the new content when an expansion is released. I usually go the opposite way and either take a break from the game or play an alt.

When the Burning Crusade launched I spent the first few months playing my 19 hunter twink. My guild was pushing through Karazhan before I even hit level 70.

When Wrath came out I did venture to Northrend early on, but I took my time getting to 80. I’ve never been on a leveling rush in this game.

When Cataclysm hit I was taking a break from WoW, then when I did come back, I played a Rogue…WTF..?!

As you see…I usually try to wait awhile and avoid the crowds, which was my plan with this expansion as well, but… I was a bit curious. I ended up venturing into Pandaria yesterday. 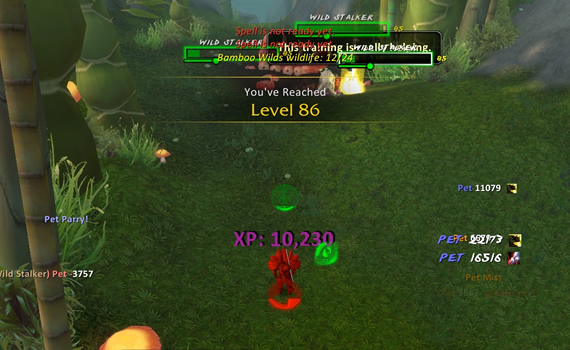 I know that hitting level 86 on launch day is really not a huge deal, but it is for me. It means I am really enjoying this new content. 😀 Usually I’d just poke my head around and then just say, meh…I’ll hit a few BGs and log off, then get back to this in a week or two. But not this time. Right from the very first couple of gunship quests I was hooked.

This expansion feels refreshing and the vibe seems very positive, to me anyway. I’ve enjoyed all of the quests so far and even went through two dungeons, which were both really fun!

What do you guys think of Mists..? Tell me in the comments below.

In less than a week, the hunter class (along with every other class) will see the most radical overhaul to date.

I’m neither worried nor excited, but I am a slight bit bummed about a few things…

First off, I may be the only hunter in the game that is going to miss my melee weapon(s) and abilities, but I’m a little sad over this. Ever since I installed the game and decided upon hunter as my chosen class, I’ve always enjoyed being able to equip and utilize melee weapons.

END_OF_DOCUMENT_TOKEN_TO_BE_REPLACED

I just peeped on Facebook that Mists will be launching on September 25th — just 2 short months from now..!!

I know I haven’t been active in the game or on the blog, but I am excited about the upcoming expansion. I’ve taken an extended break for a multitude of reasons, however, I am itching to start getting my hunter on once again. I actually jumped on for a few random BGs the other night…and had a blast. This game is just too much fun if you can let it be just that…fun.

Most of my gaming time this past year has been spent on Diablo 3, but I must admit, it’s not as engaging as I thought it would be. This could change when Blizzard adds the PvP Arena to the mix, but I don’t foresee it pulling me away from WoW…not at all.

Anyway…been awhile, so just thought I’d pop in and say “hello”. I will be putting Garwulf to work in preparation for MoP, so I hope to have some stuff for you to read in the coming weeks and months. 🙂

MMO-Champion recently posted a compiled list of all the class changes that are in the MoP beta. I’m not sure how new all of these hunter updates are, but regardless…I’m just now seeing them for the first time. I’ve been out of the WoW loop for quite a few weeks now, but I hope to return to re-enter the loop very soon. Recent developments in the RL have rendered me loopless – as far as WoW and MoP news is concerned.

Some of the damage modifier updates are interesting, but I’m mostly curious about the new skills – and updated skill mechanics. A lot of this damage stuff will change as they continue to tune things, so I’m not going to worry about that stuff too much until the expansion is ready to launch.