It seems the natives are getting restless, so I figured an update on my UI compilation was in order. I’m almost done with a 4.0.1 compatible version… almost. 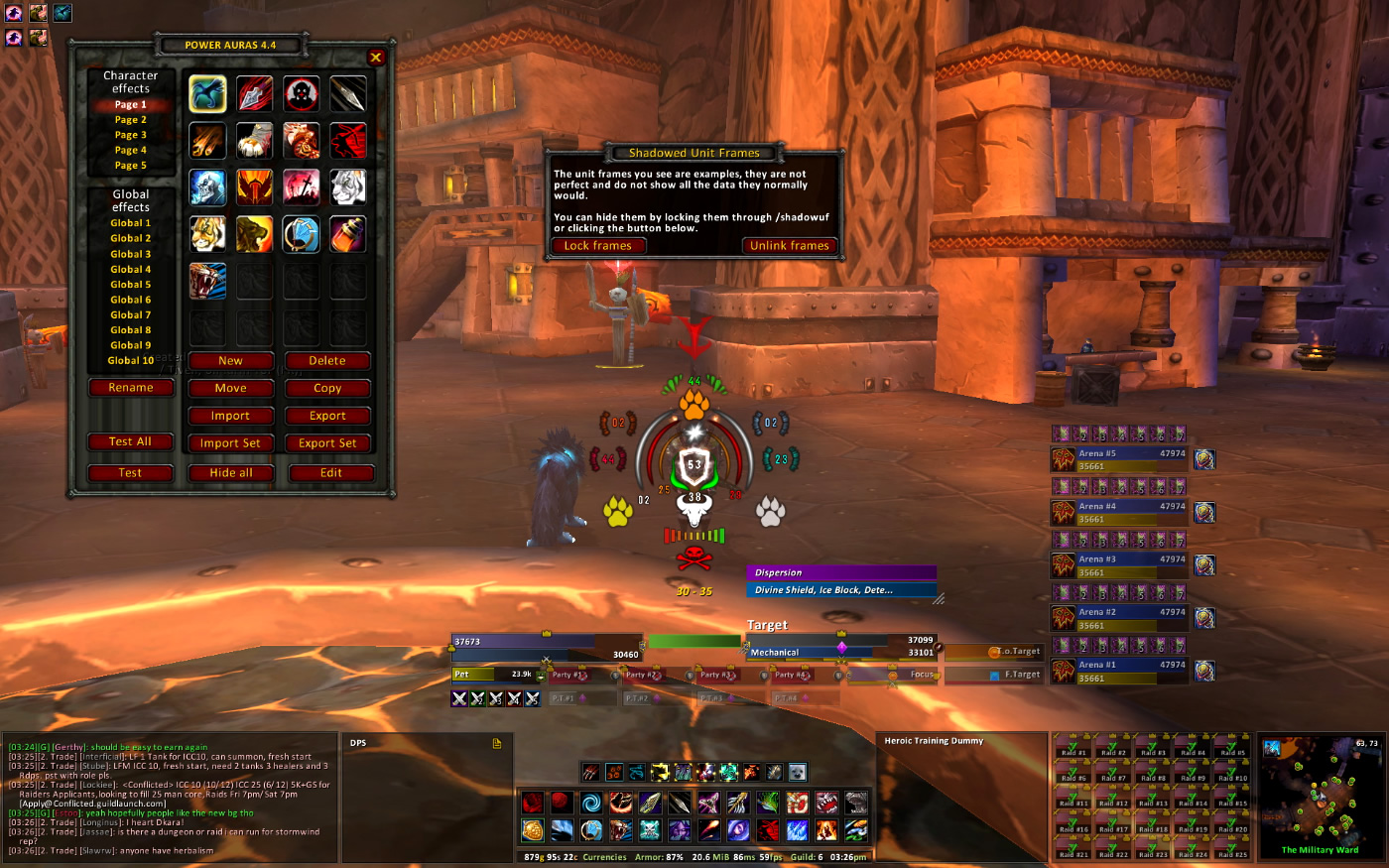 The reasons this has taken so long to finish:

A) My play-time has taken a shot to the jewels. In a week’s time I may only have 1-2 opportunities to get on (maybe…) – for perhaps an hour or two. It’s been that way for several weeks now. No cause for alarm… I’ve just been busy with other things.

B) I’m hoping to do something really cool with this update. I’m not only trying to streamline it further and reduce the footprint even more, but I’m also trying to add some more useful bells & whistles.

Rather than just update all of the addons and call it good, I’m looking to improve things by a noticeable amount.

The unit frames are a bit more minimalist, but are more functional now. I ditched the 3D portrait and increased the size of the focus bar, along with a few other minor tweaks.

I tightened up my Power Auras, so as to not interfere with the default Blizz auras. The in-game ones are nice, so I’m quite happy to let them live alongside the ones I’ve configured.

I’ve added a few new auras: one for Deterrence (with timer), one for Master’s Call (with timer), as well as a nifty (at least I think…) low-profile “focus EQ”. The hi-fi, volume-slider looking thingy just above the skull and crossbones (kill shot) aura is actually a small heads-up focus graph I’ve been playing with. For PvE play I mostly watch my unit frame bar for available focus, but I’ve found this little bar aura to be pretty helpful for PvP, since my eyes are typically always on what’s happening around my character. It’s a handy quick reference.

The three arcs are: Potion of Speed (orange), Rapid Fire (red) and Heroism (white). They all have accompanying timers as well.

I left my buff auras in there (the four auras w/ timers on opposite sides of the arcs), but I have them turned off in-game. However, I’ll post updated strings for them in case any of you are interested in trying them.

I took a page out of Kripp’s book and added two NTK timers for damage immunity buffs. These have been really handy for monitoring the duration of bubbles, ice blocks, deterrence, dispersion, etc… They are situated above the enemy cast bar (not pictured).

Another thing I’ve done that’s pretty cool… configure filters for dispellable enemy buffs. I don’t have them visible in this screenshot, but I’ve set up a series of target icons which shows enemy buffs which can be Tranq’d off. I don’t have everything in there, but most all of the important ones are listed. It provides a nice visual cue as to whether you need to burn some focus on a Tranq Shot or not.

I estimate I should have this updated and uploaded within the next week. I’m just about done getting things sorted, but I want to spend some time playing with the new configurations, so as to make sure there aren’t any issues.

So… for those of you that have been chomping at the bit to get a 4.0.1 version of this, know that it’s coming soon. 🙂