For the most recent version of my user interface, please see this page. 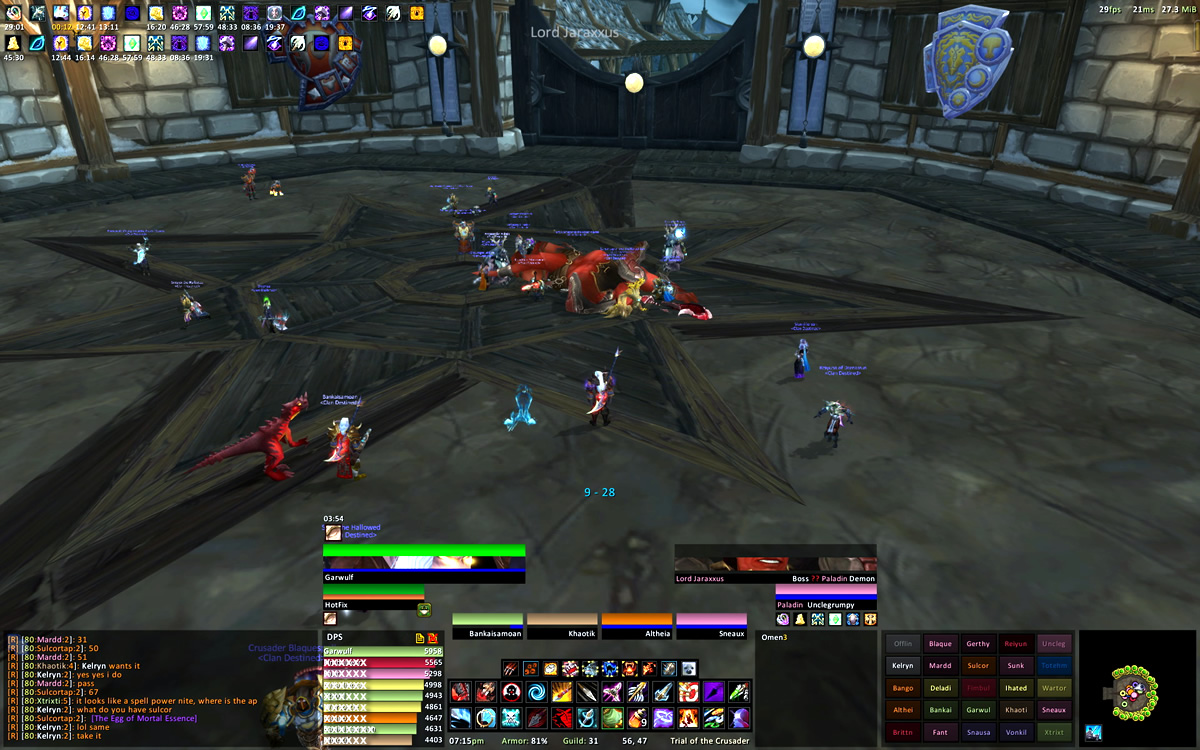 This was one of the philosophies I used when building this new user interface. Every single addon was configured and placed with meticulous care. I really wanted to create a clean, balanced and functional interface, with a large uncluttered field of view. 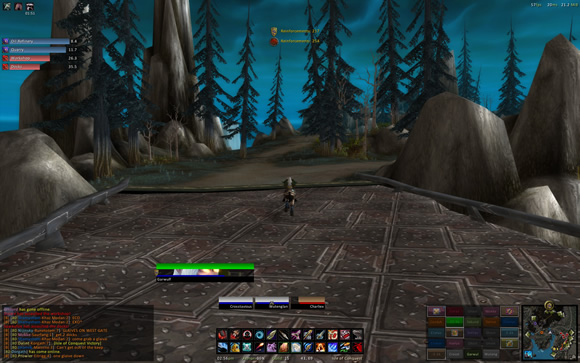 My interests are varied, so I wanted a UI that could adapt to every single game play situation. I created a UI that provides me with enough necessary and important info while raiding, yet provides a clean and unobstructed view when PvPing.

All Killer, No Filler 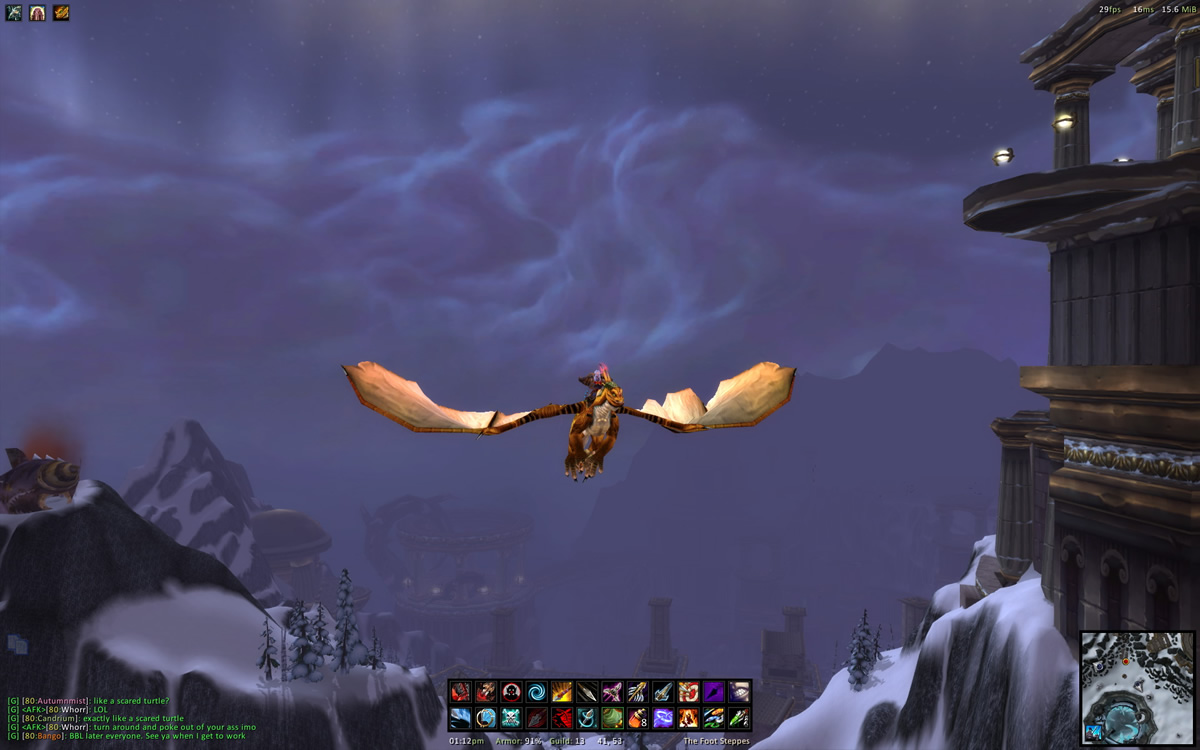 I wanted my UI to be attractive, but I didn’t feel the need to overload it with superfluous addons. Everything I’ve included in my UI is there for a good reason. The graphics in WoW are beautiful in my opinion, so why goop up your screen with a bunch of crap. 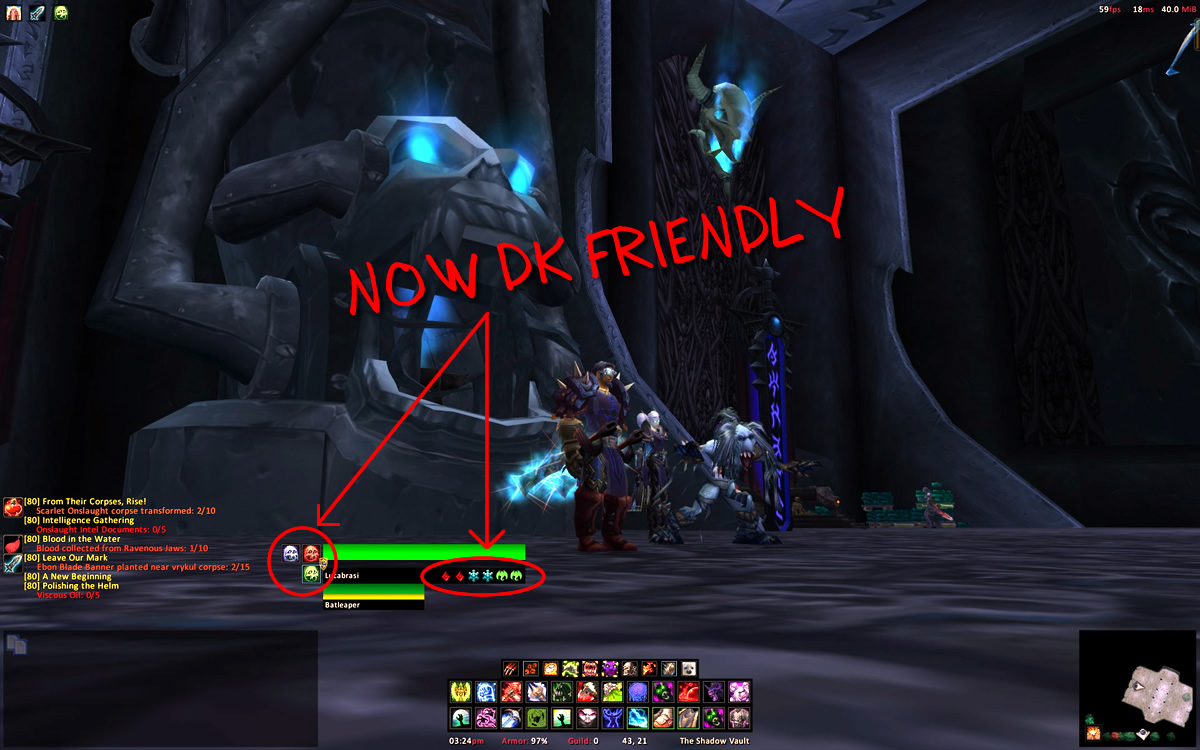 I also wanted my UI to integrate easily with my other characters. Although it was built around the needs of a Hunter, I wanted to be able to use it with a Death Knight, Warrior, Druid, etc… without any stumbling blocks. 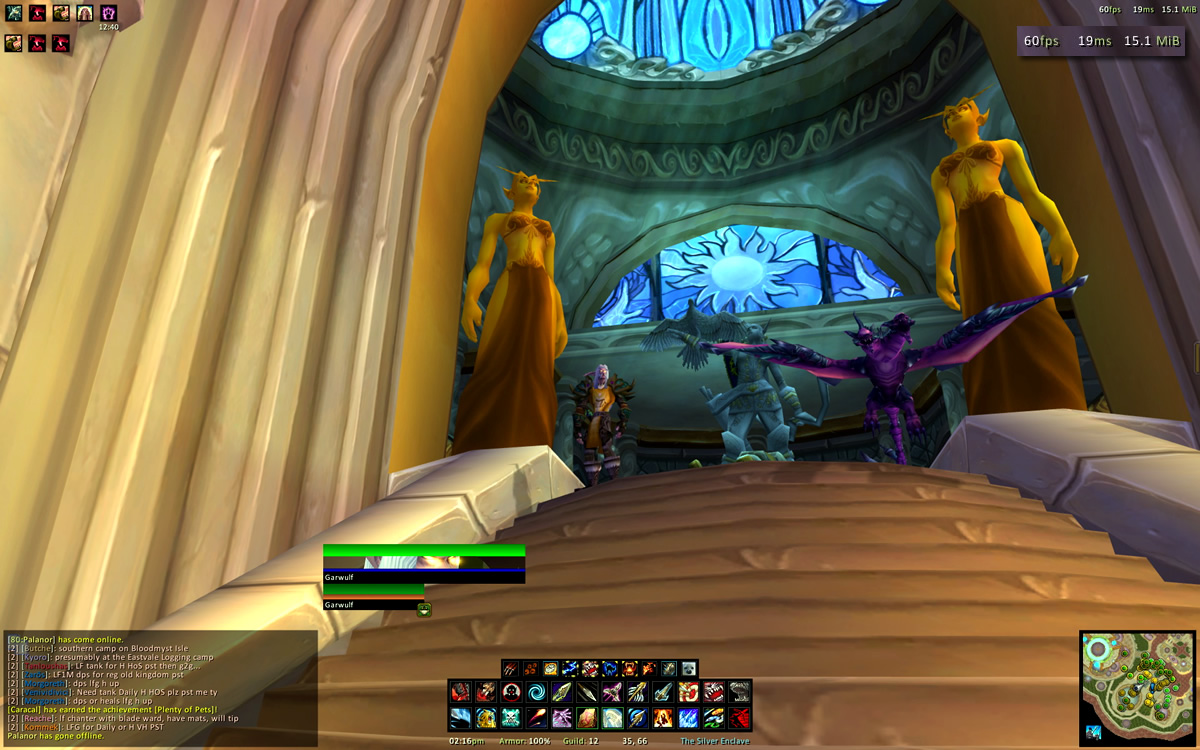 Because I tried to keep the addons to a minimum, my UI is very easy on resources. With QuestHelper, AuctionLite and Gatherer disabled it typically uses less than 16MB. I suppose you could disable the 3D portraits for even more efficiency, but why would you want to do that..?! They’re so pretty! 😀 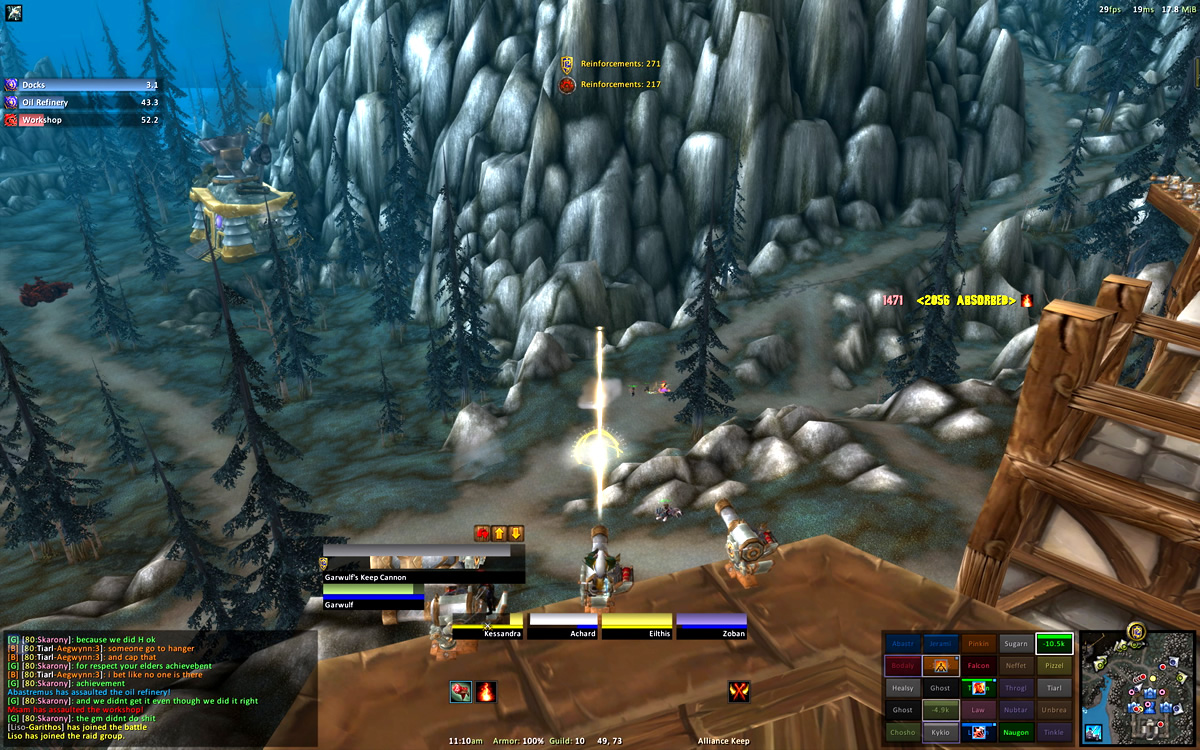 I’ve tested it extensively to make sure that it functions and displays properly in just about any situation, which is one of the reasons why I’ve waited so long to showcase it.

It Uses Godzilla Font for the Combat Text

That’s just… well… cool! You could use whatever you want, but why would you want to use anything else..? 😉

The following list contains many of the primary addons I use to achieve the look and core functionality of my UI. I use the Curse Client to manage and update 99% of my addons.

This is the best action bar mod I’ve found. I’d messed with a few others in the past, but once I discovered Bartender I’ve used it exclusively and have never looked back. It does pretty much anything and everything you want it to do.

You’ll notice that I only have 2 visible action bars on my screen. Those are mainly there for cooldown monitoring, as I have every single one of my abilities tied to a keybind. I have 3 action bars set to invisible, and one on the far right of my screen that only appears on hover-over and while out of combat. The game menu is just above my mini-map and also set to invisible unless hovered over while out of combat.

Although it’s still in development, Pitbull 4 is still my choice for a Unit Frame addon. I’ve tried a handful of others, but haven’t found another UF addon with as much to offer as Pitbull 4.

Pitbull is a lot less plug ‘n’ play than other unit frame addons, but once you get comfortable with it I’ve found it’s pretty easy to work with.

I use it for 6 different unit frame layouts. I have it configured to display me, my pet, my target, my focus, party, and party targets. This is a very basic setup which works for me, but you can configure it to show quite a bit more if needed.

My frames are set to fade out when out of combat, provided I’m at full health and mana. This is a really nice feature, which makes the UI even more disgustingly clean. Thanks to Jroaeyl for reminding me of that setting. 😉

This addon is just bitchin’. I love it so much that I use it for all of my buff and debuff displays. I have all of the Pitbull 4 buffs and debuffs disabled.

I have it configured to show my buffs and my pet’s buffs on the top left of the screen. I only need to refer to them once in awhile, so I like them out of the way. Debuffs are another story though, so I like to have them right around my and my pet’s unit frames.

My target’s buffs are showed right above the unit frame, with raid-wide debuffs off to the right of the UF. Debuffs that I apply are shown with bars just to the right of my target’s unit frame. I also have another set of debuff timers specifically for Explosive Shot and Serpent Sting placed right above the enemy cast bar, and right below my character. I have them there so it’s easy to see how much time I’ve got remaining on my Explosive and Serpent ticks.

Due to the stale development on Quartz, I was prompted to find a new cast bar addon. AzCastBar is a highly configurable, customizable and easy to use cast bar replacement. It can handle just about anything, plus it has a few additional plugins available that can expand its functionality. For instance, I use it for my BG timers.

MSBT rules. It’s not only a fantastic addon for customizing the look and feel of your combat text, but it’s also a great cooldown and spell alerter. Although you can go nuts with customizations, but it’s pretty much ready right of the box with only a few tweaks here and there.

If you raid, then you’ve got to have an addon that provides warnings and timers. Big Wigs fits the bill for me. I have my timers set to display on the left side of my screen, notifications just above my toon, and the proximity warning above my unit frame.

A must-have addon for heroics or raiding. Knowing how much threat you’re generating in relation to the tank is extremely important. In addition to the bar graph, you can also configure Omen to display other warnings as well. If you don’t have Omen, then follow my link and get it.

The standard for damage meters and raid statistics. Most everyone uses one of these anyway, but in case you don’t, start now. Recount is the only way you’re going to know how much DPS you’re bring to a party or raid. It’s an excellent tool for evaluating yourself.

Grid is easy to configure and low profile, which is why I use it. As a DPS’er, I use it for only a handful of things and it fits the bill perfectly. It gives me a quick view of our raid composition, tells me when we’re ready to pull, allows me to focus and misdirect an offtank on the fly, shows me who’s still up, who’s offline, etc.

These are a few addons that I find useful for the Hunter class in particular.

An awesome addon that’s wonderful in its simplicity and effectiveness. You specify certain thresholds at which it notifies you when you’re either running low on mana, or are near full mana while still in Aspect of the Viper. I have mine configured to sound a warning as well as display an on screen message. You could do something similar with Power Auras, but probably not as easily and effectively as you can with Viper Notify.

I mainly use this for PvP, as I find it helpful for gauging safe distance from opponents’ hostile attacks and snares. It’s also useful when raiding, as it gives you a clearer idea of range when dealing with bosses who have deceivingly large hit boxes.

This is perhaps my most treasured and relied upon addon. It can be configured to do just about anything as far as spell alerts and notifications are concerned. I have it configured to display:

Power Auras gives you loads of options for configuring how these auras display, plus you can attach audible alerts to them as well. The reason I like it so much is because it presents critical information in a type of head up display format right where you want it.

I find this addon to be invaluable for Survival Hunters, as it makes managing Lock and Load procs and DoT uptime so much more efficient. I use it when playing all three Hunter specs, but for Survival I think it’s a must have.

OmniCC displays an actual cooldown timer right on top of your action bar skill icon. It’s very simple, yet extremely effective. With OmniCC there’s no guesswork as to how long you have before that next shot or ability is available. It’s a useful addon for any and all classes, but I wouldn’t want to go Huntering without it.

The rest of my addons are mainly for convenience and/or to doll up the UI.

So there ya have it. That’s a pretty in-depth look at the UI I’m using at the moment. I was planning on delving a little deeper even, but I feared you guys would have my head if I didn’t post this soon. 😉

It’s not vastly different from other UIs I’ve made in the past, but it is very much improved in a lot of ways. I’ll post a link to my UI compilation once I get some installation instructions written for it, but this post will at least give you something to chew on for a bit.

My UI has been updated since this post. The basic layout is quite similar, but a few of the addons have changed. For more information on the most recent version of my user interface, please see this page.