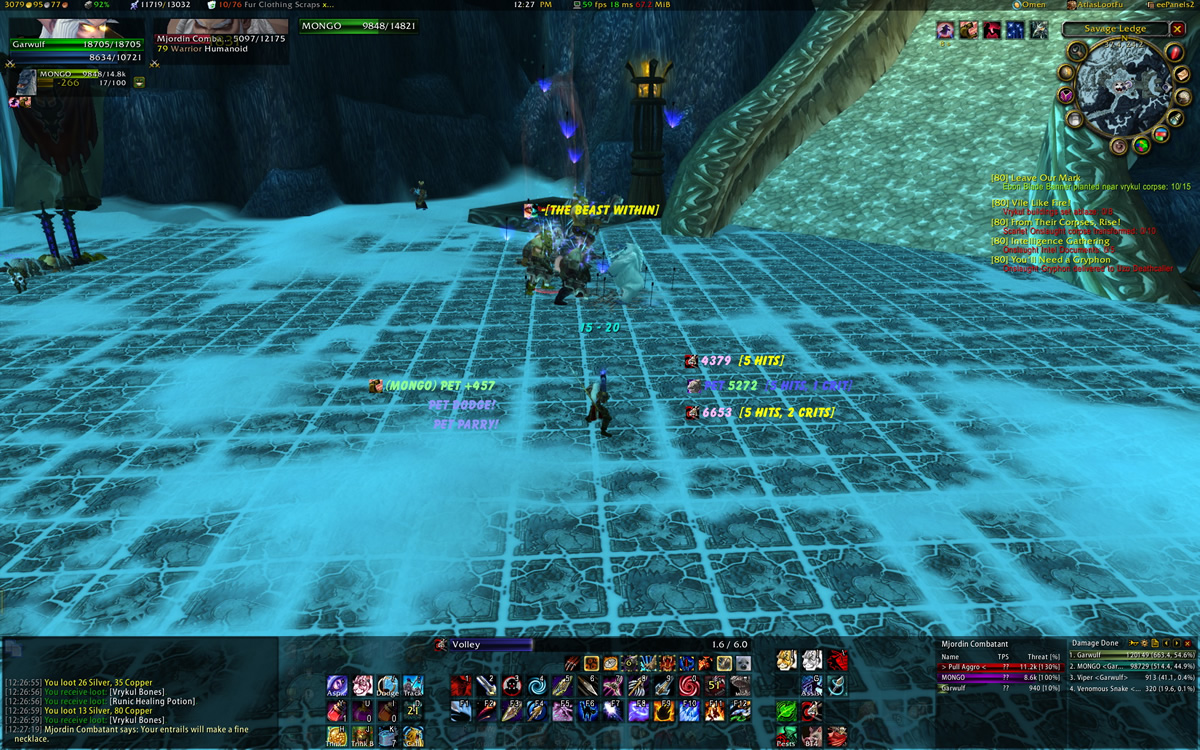 Since I posted my short video of the Loque’nahak taming on YouTube, I’ve received a lot of questions about the addons that I use. As a result of this, I have packaged and uploaded my UI suite to this website so that others may try it out.

I’d been meaning to do this for some time, but two things held me up. First off, a UI is in constant flux in my opinion. Anyone who’s tackled trying to install and configure 3rd party addons knows this. It is rare that someone will actually be 100% satisfied with their UI and give up messing with it. Secondly, there are only so many hours in a day. Instead of taking the time to dial in my UI, write installation instructions, package it up, upload it to the site, and write this post, I opted to just “play the game” in my spare time. After all, what good is having a site like this if you don’t actually have time to play. 😉

Well, the waiting is over. I finally got off my ass, err… well I’m still on my ass, but at least I’ve managed to upload my UI as I’d promised months ago.

This UI is designed to perform in about any environment. My primary focus is on PvP Battlegrounds and Arena, but this UI will work just fine for any actively raiding Hunter.

The idea behind it was to keep everything tight and orgainized at the bottom of the screen. Before I started working with more addons and was using the deafult Blizzard UI, I was always frustrated with the placement of various addons such as  Omen, Recount, and the DBM timers, not to mention the 2 action bars on the right side of my screen. Since I played so long with the default UI I got used to that layout. I tried other configurations of the unit frames, map, etc, but it always confused me so I just stuck with what I was used to as far as placement.

I tried the Spartan UI, but I grew tired of it after a few days. It looked real slick, but it didn’t do much for me. Plus, the unit frames and map were located on the bottom which made me crazy. I then decided to hunker down and try to come up with something that worked for me. The result was something very close to my present UI.

Since WotLK I’ve dumped some addons and tried out some new ones. After several weeks of play, I’m pretty settled with this UI I have now.

A Brief Description of the Layout

At the top of my screen is the FuBar mod which several of my mod icons plug into. Like my panel at the bottom, I have the alpha set around 50%. The unit frames are my highly customized PitBull frames. Aside from basic player, pet, and target; I use focus, target’s target, and mouse-over target. The buff icons are configured using Buffalo and the map (which looks almost exactly like the default Blizzard map) is configured via SimpleMiniMap.

The bottom portion I’ve used Bartender 4 for my action bars. Some are set to mouse-over, so that they fade out when not used (game menu, bags, bars 3 and 6). Prat is the chat mod on the left. Omen and Recount are located on the right and only displayed when needed.

My casting bar displays just above my pet bar, and my swing timer above that. Enemy cast bar is above the swing timer. Target debuffs that I apply appear just below the target unit frame. All of these were configured using Quartz.

It is optimized for 1920×1200 resolution. Since you may not be looking at an awesome 24″ Apple display like I am, you may need to adjust a few things to get it how you want it.

So here’s the rundown on the mods…

Well there ya have it. Those are the addons that I use. Thank goodness I have 4GB of ram. 😉

If you’re having trouble with your fps after trying it, disable Quest Helper. It devours ram. If you still want a quest mod you can try Carbonite out.

The Garwulf UI is packaged and will require some type of unzipping application, but I assume you know that.

Previous Post: « After one week of PvP in Wrath of the Lich King, here’s what I think…
Next Post: The Flag of Ownership »