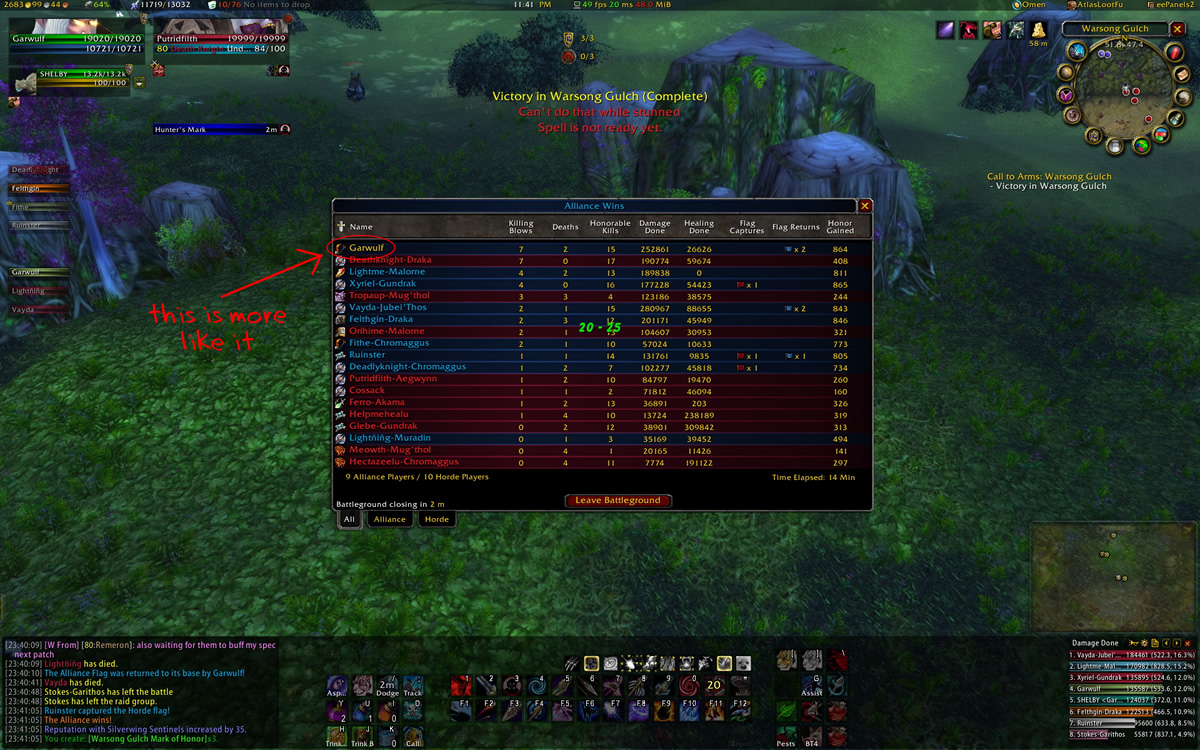 BM is still very viable. Initially, I was a little distraught over my performance, but after a few tweaks and some shedding of noobedness I did alright.

I started arena last week with a Ret Pally friend of mine. I was nowhere near ready for arena, but I didn’t want to lose another week’s worth of points. We went for 10 games and finished 6-4, but then ended up 6-6 after I felt the need to push it. I think we’ll fare much better this week.

I half expected to do worse considering I wasn’t using any of my new skills, not to mention my gear is so-so. Also, I was using my Spirit Beast for lack of a better pet. It turned out however, to be a pretty decent choice. Ferocity seems the way to go with our double burst setup. Also, the Shadowmeld/Prowl starter in Ogrimmar arena proved useful.

I spent a couple nights in Warsong Gulch trying to dial in my keybinds and get used to some of the new abilities. I find WSG to be a pretty good place to work on PvP skills, plus you earn honor points while doing so. Although granted it was WSG weekend, I was earning as many as 1.5K for a win. That’s a huge improvement over the old grind. I’ll be exalted with Silverwing Sentinels in no time!

After a few nights of farming honor, I felt a lot more confident in the BGs. In fact, I returned to the top three position for damage in just about every BG I was in, which is how it should be 😉 . I’m not a GY camper or mid-field farmer either. After two nights of BGs I ended up with my Hateful Gladiator’s Ring and nearly 17k honor left over.

My gear needed some attention, so I crafted 2 more pieces of Swiftarrow armor to stack more resilience. During that time I realized I had never added my third major glyph once I turned 80..! *facepalm* Welcome to Noobsville, population me. I elected to go with the Glyph of Disengage. A shorter CD on that can never be bad.

I also learned to play in that time. Freezing Arrow is an incredible skill. I love plopping those on unsuspecting healers while I nuke down their teammate. Master’s Call has not been setting the world on fire for me just yet, but Heart of the Phoenix is! That skill rules. An instant pet res can be a game-breaker. I was going to level a Crab for PvP, but I’m liking Ferocity at the moment. My Spirit Beast is too pretty to leave in the stable anyway.

All in all, I’m excited about PvP again. I still have a ways to go in terms of getting used to the new class abilities, but at least I’m not getting bent over by every Death Knight I go up against now. 😉