Hello readers and happy holidays! I hope you are all having a relaxing break, and don’t have a multitude of ruffians that are in your charge for the next week or so until their mothers come back and claim them. Obnoxious, rowdy ruffians who continuously want to play Pokémon with you and will not leave you alone for even a moment’s reprieve… But anyway, on to Beast Mastery!

Over the next few weeks, I’ll be giving you some advice on how to assemble your very own raiding Beast Master. I’ll be going through pets, talents, gems, and even a few addons that will make raiding as a BM easy and fun.

This week I’ll be covering:

But first, why even choose beast mastery? We don’t get any special shots, automatic raid buffs or even do close to the amount of damage that the other two hunter trees can put out. So what are a few of the perks of being a BM?

Sound appealing? Let’s break it down and see how Beast Mastery functions:

This is the highest DPS talent build for a Beast Master, and the one I currently use for raiding. 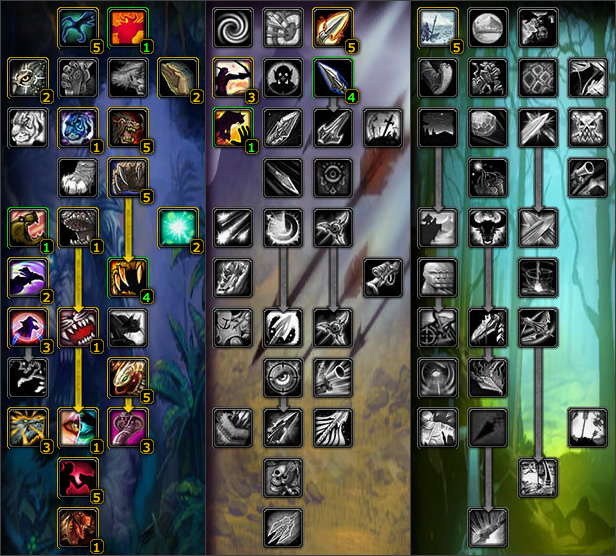 Of course, there’s always a little wiggle room within any build, so feel free to experiment and see which talents you prefer the most.

The Beast Mastery talent tree is straightforward. Invest in the talents that increase damage and try to avoid the ones that don’t (unless you’re having a hard time keeping you or your pet alive).

Once you’re done with the BM tree, you’ll have between 10-20 points left to spend in other talent trees. Marksmanship offers better choices in the first few tiers, and most of your leftover talent points should be spent here.

Lethal Shots is a necessity unless you are under the hit cap (a 263 hit rating [without any space goats in your group]), in which case your talents should go into Focused Aim until that magic hit cap number is reached.

3/3 in Careful Aim offers a better damage output than 5/5 Mortal Shots, but both Careful Aim and Mortal Shots are both very good talents for BM. However, both of these talents pale in comparison to Go for the Throat, which cause your ranged critical hits to generate 25/50 focus for your pet. One talent point in this, combined with Beast Mastery’s Bestial Discipline, will provide more than enough focus for your pet.

Aimed Shot should probably not be talented. Even though it has a little higher DPM (damage per mana) than Multi Shot, the points taken away from Improved Tracking or Careful Aim result in an overall lower DPS output. If you are in love with Aimed Shot, then go for it. However, just know that it’s pretty situational (only a handful of raid encounters in WotLK merit it), and you get more bang for your buck with Multi Shot.

Although there’s not much in the lower levels of the Survival tree, Improved Tracking is one talent that should not be overlooked. 5/5 talent points are recommended if you have any points to spare.

With a measly six minor glyphs to choose from, hunters don’t really have much of a choice when picking them out. Here are the three that I suggest using:

As a Beast Mastery Hunter, there are two major stats that you should stack: Agility and raw Attack Power. The former is usually chosen for a few reasons:

One: Beast Mastery is usually not a main spec, and switching out AP and agility gems every time you switch specs is unreasonable and costly.

Two: Attack power beefs up your pet, but pets do sometimes die, and if that happens, you’re screwed. Agility puts more emphasis on the hunter instead of the pet, and for that reason, agil is sometimes preferred.

There is a downside when gemming for Agility though. Your overall DPS is lowered by about 2-5% compared to when stacking for AP. I’d advise to start with Agility, then switch to Attack Power once you have practice keeping your pet alive at all costs, or if you decide that BM is going to be your primary PvE spec.

I would not recommend gemming blues for your blue sockets unless the bonus is particularly attractive. In most cases, replace your blue with a red, and you’re set. Though, to activate your meta gem, one blue gem is needed. I would use Nightmare’s Tear. However, If you really want to match your gem sockets, here’s what blues I would propose:

That’s it for this week, good luck and happy hunting! 😀