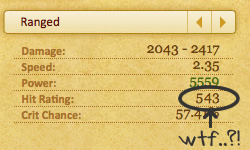 To be hit capped as a hunter, you need an 8% increased chance to hit after talents and buffs.

Broken down, that means 5% hit rating to cancel out the default miss ratio, plus another 3% to account for the additional three levels when dealing with a raid or heroic boss.

This 8% can be obtained through a variety of ways, including gear, gems and enchants. In order to reach an 8% increased chance to hit, you need 263 hit rating. This translates into roughly 33 hit rating per one percent increased hit chance.

Draenei have a racial ability called Heroic Presence which provides a passive +1% increased chance to hit for the entire raid. So by default, if you’re a Draenei hunter, you only need 7% added hit to be capped.

If you are betting on the fact that your group will always have Heroic Presence, then you could theoretically run with only 7% hit regardless of your class. However, you’d better have some alternate gear pieces, hit rating food, or some Elixirs of Accuracy to chug in the event that your group finds itself sans Space Goats.

If you’re in a hard core progressive raiding guild you could probably afford to run with 7% hit and allocate points elsewhere for more DPS. For the rest of us though, 8% is the best bet and will ensure zero misses from range.

Once you reach an 8% increased chance to hit, either through gear, talents or buffs, anything beyond that number is useless.

Apart from hunters simply lacking an understanding of the mechanics of hit rating, I think the factor that’s most to blame in the case of overstacked hit, is a player’s desire to boost their gear score, ie: The Mark of Supremacy Epidemic.

Often times players see a higher ilvl and think, Upgrade! They don’t stop to consider stat weights. Nothing is more evident of this fact than the amount of over hit capped hunters running around with a Mark of Supremacy. Players assume that because it’s an ilvl 245 trinket, that it’s a DPS upgrade. Not always. In fact, in every single one of my hunter DPS deficient diagnoses, The Mark of Supremacy was responsible for a DPS loss.

When a hunter who’s over the hit cap then tosses on a Mark of Supremacy, all he or she gains from it is the on-use buff. The passive buff is completely wasted.

Using my current armory as a test bed (5.6K GS w/ 264 hit rating), I compared two very easily obtainable ilvl 200 trinkets (Mirror of Truth & Banner of Victory) to the ilvl 245 Mark of Supremacy. Both trinkets offered gains from 83-91DPS, with the Mirror of Truth being slightly higher.

In short, unless you need the hit rating that this trinket provides, and most hunters do not, trade down and spend your emblems on a MoT.

Good trinkets are perhaps the most difficult piece of gear to obtain in the game, so it’s no surprise that players would be compelled to purchase an easily obtainable ilvl 245 one when given the opportunity. However, it’s a perfect example of why “upgrade” is a relative term.

With the introduction of GearScore as a qualifier for raid invites, epeen stroking, etc… the desire to bolster that has gone near out of control. Here is an example…

Some weeks back I ran a 25 man ICC with my guild, in which two huge hunter items dropped (Wodin’s and the Snowserpent Helm), both of them very nice upgrades for me. Being that I only get to raid a handful of times per month, and because my guild uses a DKP system, I typically don’t have a lot of DKP to spend and tend to do so sparingly. Due to this fact, I surrendered on both items to another hunter in our guild who was bound and determined to outbid everyone in the raid. His reason for this, was because he wanted to reinforce his foothold as top gear score in the guild.

Being that I’m an officer, elder statesman, top dps, and beloved member of our guild 😉 , his greed was met with some contention by the other officers. There was also no doubt that I’d contribute more raid DPS with those items than he would, however he had the DKP to blow, so he blew it.

Afterwards, one of our officers asked on vent, “do you even need all that hit rating..?!”. The hunter, we’ll refer to him as “jackass” out of respect for his privacy, didn’t respond.

After the raid, I pulled him up in the armory for curiosity’s sake and was shocked to see that he was rolling with an absurd 558 hit rating. That meant he was wasting nearly 300 stat points, which could have been netting him a ton more DPS had he been more selective with his “upgrades”, and not been greedily outbidding others simply due to ilvl and gear score.

This hunter had me trumped by quite a bit as far as gear was concerned, yet we always ran neck and neck in terms of DPS, with me typically edging past him on most fights. Execution I’m sure had some part to play in that, but no doubt his poor itemization was a factor as well. I speak of him in the past tense, as he is no longer with us. 😉 Perhaps he’s learned a thing or two, because when querying his present armory, I find that he’s now running with a more efficient 428 hit. 🙄

In closing, be mindful of hit rating when looking at upgrades. If you’re in an ICC25 PuG (god help you) where a really nice ilvl 264 piece drops, by all means roll on it if you could use it. However, it may not be worth equipping just yet, if it’s main benefit is added hit. Yet in the event of a guild run, you should probably refrain from bidding or rolling against fellow guildies who actually need the hit on the drop you’re competing for.

The moral of the story… just because the item has a higher gear score, doesn’t always mean it’s an upgrade.

That’s all for today! See you next time… 😀