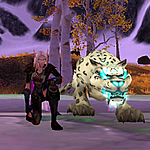 Yes, the greatest…Or is it worst Huntard quotes I have personally seen. Things like this make me stop questioning why the poor hunter class is always picked on. Just when it seems like I will live it down, something like this happens. Sad part is…it’s not always low levels. Some of these were a whopping level 70+.

10. Why can’t I equip this shield? I thought Hunters could use shields.

7. What do you mean turn Aspect of the Viper off? I need mana…

6. Oh, the pet was on aggressive. Stupid thing.

4. Can I need that neck? I need the block for melee.

1. If I screw anything up, don’t blame me. I just bought this toon yesterday.

What about you? Do you have any fantastic, stupid or amusing quotes of hunters you’ve ran across?

It’s said that Hunters are the easiest class to play, and while this might be true, it’s also one of the hardest classes to really master. No matter the level, there isn’t ever a lack of some hunter with defense gear in Ulduar for example, or using shaman caster mail or even stacking strength because “Hunters can use it too”.

On the opposite side of the spectrum there are the hunters like the one I knew in a old alt guild, he was geared to the hilt, had all the right gems and stats, yet couldn’t break 2k DPS. One of the top geared people in the guild at the time but was the lowest damage wise. No one could figure it out, not until this one day in ToC10 when he made the obvious statement that clued everyone in…

I swear, he had no idea what it was, in fact after seeing a screenshot of his UI I was stunned, he was using Scorpid Sting, Viper sting and the like. Spells we have, though that seemed to become obsolete after Classic WoW. Now while leveling I’d found a use for it, but not so much at 80 though. However, seems he had thrown it into his generic rotation.

I came to the conclusion especially after the patch, that hunters are severely misused. Players concerned more with topping the charts than paying attention to what they’re actually doing, or using what they have available to them. Everyone talks about shot rotations and shot priorities, while ignoring small things they could be doing to help themselves out. The hardest part about playing a hunter…is playing one well.

I don’t want to drone on and on about proper pet management, or running away from something that has you directly in its sights. Yet, there are a couple of things I do that do not take too much time out of my button smashing, and actually are severely noticeable on the recount window as well as my personal or raid survivability.

A few tips for effective huntering…