Last I checked in, I was singing the praises of the wasp for lowbie hunter PvP. Well, I’m happy to say I’ve found an even better companion to take along on my battleground adventures — at least for now. These days I’m accompanied by a badass battle birdie, who was formerly known as Olm the Wise.

Olm the Wise is a spectral owl who can be found meandering about in NE Feralas. This one-of-a-kind bird of prey model is really cool looking, as it’s somewhat like Ban’thalos – only toned down a bit. Olm doesn’t have the cool misty aura surrounding him, but he’s still really awesome – especially considering he’s available to lower level hunters (48 and up). 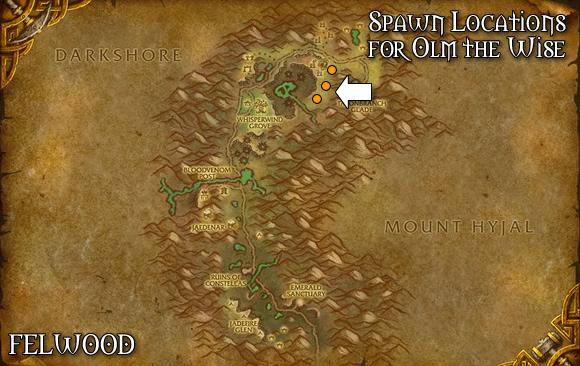 Olm is a rare owl that has been around a long time, but there was a brief period during the shift to Cataclysm, in which he disappeared for a bit. The previous Olm had the traditional white owl model – same as the Stormpike Owls. When Olm resurfaced in Patch 4.0.6, he no longer had the generic white owl skin, but rather a cool new ghostly look.

It’s thought that Olm was probably killed at some point after the Goblins came into Felwood and started running amok with their deforestation. After a short period, he’s resurfaced as the same peaceful, wise old sage he always has been. It used to be that Olm was part of the Cenarion Circle, which required hunters to temporarily set their Cenarion Circle status to, “At War”, in order to tame him. This no longer applies, but he is still a neutral mob.

I’ve tamed Olm twice now – once on my Dwarf Hunter and then another time on my Orc – both in exactly the same location. I’ve also seen him in this same spot a third time, so it’s a pretty popular spawn location for him. It’s the southern-most part of his spawn area, at approximately 54,27 (coords.).

I’ve also happened by him once at the northern-most spot, right by the road. If you decide to go hunting for him, best bet is to make a quick pat through the area indicated on the map. It’s not a very big area – especially if you have a flying mount.

Alright… so two reasons I went after Olm…

One… he’s a great looking hunter pet, and a unique rare one at that.

Second… he has a disarm ability which is fantastic for lower level PvP.

I was finding that Rogues and Death Knights practically owned the 50-59 bracket. As a hunter, I felt I did really well, but those two classes seem to be terribly imbalanced at these lower levels. Rogue damage is absolutely ricoculous at this level, and although Death Knights seem to do slightly less damage, they’re gap-closing and CC abilities are insane. Both classes have the ability to lock down and absolutely murder you within seconds.

Since the two toughest classes I had been facing were both melee, I decided to go with a Bird of Prey for their Snatch ability. It’s definitely helped. I am no longer experiencing certain death in situations that previously I’d been unable to recover from.

Also worth noting… using a Bird of Prey will allow you to absolutely wreck other hunters. Hunters can also be pretty strong in these brackets, making the Bird of Prey a very good counter.

With my Beast Mastery talents (3/3 Longevity), I have Snatch available every 42 seconds, which is pretty nice. I haven’t bothered to compare pet DPS at this level, but I am seeing some amazing Kill Command crits in the 2.7K range when Feeding Frenzy comes into effect. Combined with the focus efficiency of Owl’s Focus, it’s quite possible that Olm (Cunning) is putting out more DPS than Rex’Ashil (Ferocity) was previously. 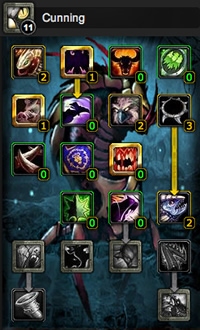 I recently leveled out of the 50-59’s, so now I have 2 points in Freeding Frenzy — providing me with even more critty deliciousness on targets at low health. At right is a look at how I’ve got my bird talented up…

PvP is not an exact science, so I tend to use which ever pet facilitates more efficient kicking of enemy ass. That’s about the extent of my low-level hunter PvP theorycraft. 😉

There is one tiny little bug about Olm… his bonus Trick ability does not work. For me this obviously isn’t a deal breaker, but it does need fixin’, so I figured it’s worth a mention.

At any rate… if you’re an up and coming hunter looking for some PvP fun as you level, I give the bird of prey very high marks. And… in particular, if you want a good looking pet that will incite ooohs and aaahs from onlookers, then I highly recommend adding Olm the Wise to your stable. 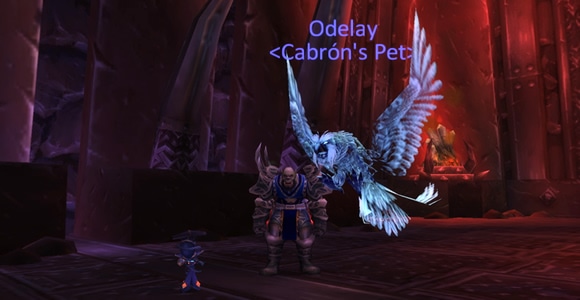