Here’s how it shakes out…

Garwulf: My lvl 85 hunter… the main main… the big cheese… the proprietor of ‘The Lodge’

Here’s a list of my alts and their time played. Once I’ve gone down the list, we’ll see just how much of my life Blizzard has sucked from me. 😉

This guy actually was supposed to replace Garwulf as my main back in vanilla. I built him in an effort to create the supreme PvP hunter, but ended up all but retiring him once TBC came along.

Initially, I created this guy to help fill an off-tank void within our guild, but later ended up discovering the joys of healing. I don’t play him much these days, but it’s nice to have a stinky Resto Druid in my character list in the off-chance I need a break from huntering.

My beast of a hunter twink. Although I haven’t really played him in years, he actually saw more game time than Garwulf for a few months prior to the release of TBC. He’s exalted with the Silverwing Sentinels and has amassed over 30K honor kills.

I had to make one. I had a bit of fun with him, but I still can’t get into the whole ‘Death Knight thing’, so he pretty much sits at 80 – where he’ll probably rot for all eternity.

I created this alt in order to experience life as a member of the horde, pre-Cataclysm. I ended up taking my time and twinking him along the way, so he never quite made it through all of the content before it was destroyed by Deathwing. However, I had a lot of fun playing him and perhaps at some point I’ll take to leveling him again.

This guy was unwittingly my first twink in the 10-19 bracket. I had won Smite’s Mighty Hammer in a Deadmines run and thought, “hmmm… I bet this thing would wreck in WSG at this level…”. Oh yeah… I went in and started dropping players like mad, then I took it a step further and threw Crusader on it. Good times back then, but I eventually leveled out and decided to reappear with a class I actually knew how to play. That’s when I went to work on building Wrathchild.

I figured I’d give cloth a try, as well as Tailoring as a profession, but neither grabbed me, so at 22 he sits. The only reason he has as much played time as he does is because I did mildly twink him for 10-19, plus I started using him as a bank alt. 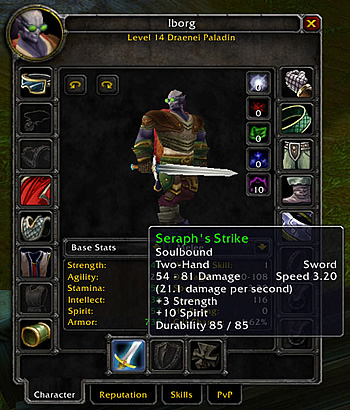 I thought it would be fun to assemble the ultimate 19 Paladin, so I built Iborg. This was back before shutting off experience was an option, so gathering all of the necessary twink items – many of which were obtained through exp. giving quests – was quite a science. At only a few bars into 19, he’d acquired pretty much any and every piece of equipment an uber 19 Pally would need. This included obtaining Seraph’s Strike, which required completing the entire (now obsolete) Tower of Althalaxx quest chain, at only level 14!

Only problem with Iborg… he was all gear and no skill. I didn’t have near as much fun palying him as I did my 19 hunter, so at 19 he sits… untalented and neglected… However, I used to enjoy engineering new twinks, so the journey was at least fun. 😉

I made this guy after a short WoW-hiatus, as a way to casually explore Cataclysm, without the pressure of feeling like I needed to constantly post about new hunter info, etc… I needed to unplug a little from the game, and from blogging as well. Looking at all of my /played, you can see why! 😉

Nostrovia has a pretty decent set of heirlooms, plus I was using Zygor’s Guide when not BG’ing or Dungeoning – which is why he has so little time played. Only…

Anyway, I was having a lot of fun playing a rogue, and would like to get back to him at some point, but as they say… there are only so many hours in a day.

Over the years, I’ve spent over 8,200 hours playing this accursed game. That’s just insane when you view it that way.

Of course, a small portion of that time was spent afk… just sayin’. 😉

At any rate, I can happily say that I’ve slowed down greatly over the years. These days I average about 2-3 hours per week, which is just enough to wet my WoW whistle and to keep up on all things huntery.

So how about you all… anyone care to share how much of their life they’ve spent in Azeroth? 😀