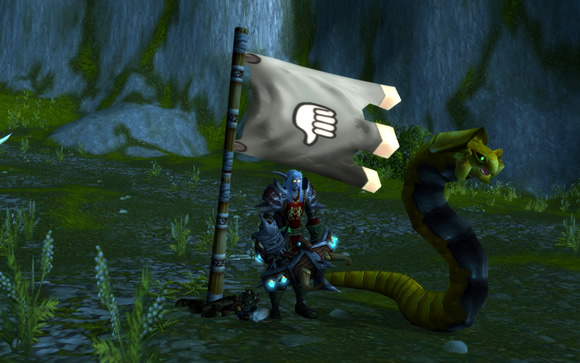 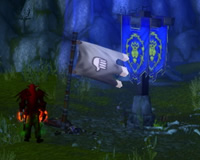 The Flag of Ownership

My wife threw a couple of packs of the World of Warcraft TCG in my Christmas stocking and I was lucky enough to pull the Owned!

loot card from one of them. I had never bought any of these packs before, but I knew about the loot cards. Being a former hard-core sports card collector, I knew an insert card when I saw one. What I didn’t know was just how cool it was…

I haven’t used it a ton, but Flag of Ownership

is a blast to use in battlegrounds or any other PvP situation. It plants a flag with the “Thumbs-Down” icon on it into your victim, and then announces that you’ve “Planted the Flag of Ownership into (insert victim’s name here)”. It’s a barrel-of-monkeys for sure.

I planted it into a Mage in Warsong Gulch who tried to 2v1 me with their Lock teammate and lost, then came back to 1v1 me while I was eating by the graveyard. They lost again with me beginning the fight at about 50% with no cooldowns. I couldn’t resist at that point. Needless to say… after planting my flag, I became their Huckleberry. After res’ing the 2nd time, the Mage came after me with a vengeance and dropped me. It was close, and I was only at about 20% to begin the fight, but I guess I deserved it after my unsportsmanlike taunt. 😉

has been reduced to only a 1 min cooldown, down from fifteen. I highly recommend you obtain one of these. It greatly enhances ones enjoyment of the game. 😉

Stocking stuffers comprised much of the gift giving this year at our household. We elected to focus on the children and keep the adult gift exchange to a bare minimum. One of the things my wife did was dump a few booster packs of WoW TCG Drums of War

in my stocking. Although I’d never purchased any of these before, I did know about the tabards and some of the other cool things you can randomly pull from these packs.

Being a former avid collector of Football and Basketball cards, I know a rare card when I see one. My all-time pull was an autographed Scottie Pippen card that was numbered out of 100. This was back in the day before ebay was king, and I sold it via an internet newsgroup for seven hundred bucks. While not as awesome as that, I came across a card that looked like it must be pretty special. I was right, because later on that day I Googled it to find that it sells for anywhere from fifty to seventy dollars on ebay

The card turned out to be the Owned! loot card from the Drums of War series. It has a code that grants your character a PvP taunt ability. I haven’t had a chance to use it yet, but apparently you can plant a flag next to your fallen victim after you’ve defeated them in a duel. Too bad Hunters just got whacked with the nerf bat. 🙁 Maybe someone will be gracious enough to let me beat them so I can see the animation in action. 😉