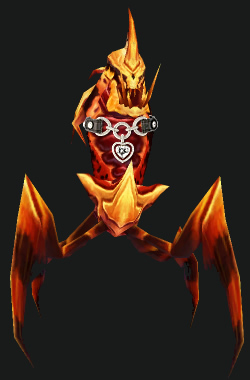 This is entry #12 in the 30 days of WarCraft series of articles.

The thing I’d like to see implemented in WoW is something that nearly every hunter has hoped to see happen… pet collars!

Blizzard has been taunting us for years by having mobs drop Small Leather Collars in our starting areas. When I picked up my first one, I was over the moon thinking that I’d be ale to outfit my pet – acquiring better and better collars as I progressed through the levels. Then the harsh reality… pets don’t have an equipment interface. There is no way for them to equip anything. 🙁

Eventually I realized that the Small Leather Collar was just a piece of vendor trash… a devious ruse to fool us unwitting hunters into thinking we’d have further pet personalization. A cruel trick really.

I think it’s time they end our torment and enable our pets to wear these. I think it would be an awesome addition to the game on so many levels…

First, it would allows us hunters to further tailor our pets for different types of game play.

Second, Blizz could make the majority – if not all of the pet collars – craftable. I see leatherworkers making these, but I can also see jewelcrafters and maybe even blacksmiths playing a part. For example, a LW would profit from the crafting of a collar, but a jewelcrafter could also benefit by crafting gems hunters will need to socket in these collars, with blacksmiths making the tags for them. What a boost to the economy that could provide!

Heck… Blizzard could allow them to be displayed, therefore bringing tailors into the mix. Tailors could sell dye to the hunters that want to color coordinate their pet’s collar!

As far as how the collars would work…

I’m flexible here. If they were to implement wearable pet collars, I’d be happy with almost any benefit, as long as there were choices. I’d want to be able to fashion my PvP pet’s collar one way, with a solo-tanky pet’s done up another way, then be able to have my DPS pet set up another way.

I’m not sure how Blizzard could approach this, because I’m sure this new mechanic could be a huge can of worms in terms of trying to keep things balanced, but my solution would be to make their impact fairly minimal, with no direct boost to DPS. The benefits would be in the form of slight increases to various pet abilities — with the emphasis being on utility and survivability.

The basic premise I see would be to have collar, and collar enhancements, function much like glyphs. They would simply provide a boost to some skill by either increasing its effect by a very slight amount, or by reducing its cooldown by a fraction. As I’d mentioned, in order to not upset the apple cart too much, none of the augments to pet abilities would apply to DPS skills.

Collars could boost armor, health, speed, threat, resistances, healing effects, etc… all by a small amount. Added pet speed could help a teensy amount in the DPS department, but would mostly be inconsequential. However, all of these enhancements could help hunters in PvP — the area where we could use it. Not that we need much help with soloing, but these things would help there as well.

These are just some early thoughts, and I would see collars as having no more than 3-4 total benefits – with enhancements.

It’d be great if there could be a way to buff pet DPS by way of a collar, but I don’t see that happening. It would require Blizzard having to recalibrate all sorts of hunter/pet mechanics in order to prevent an uproar from the lesser classes. 😉

Alright, so what do you guys think..? What would you want to see introduced in the game if you could get Blizzard to entertain one of your ideas.