This is entry #11 in the 30 days of WarCraft series of articles.

Yep! You got it… Brewfest!

In fact, Brewfest is probably the only holiday I really get into. I love the whole atmosphere of Brewfest — the music, the revelry, the… brew!

I’m such a fan of Brewfest that a few years back I made a 29 twink hunter named, Pilsner. My plan was to deck him out in full Brewfest regalia – starting each BG in character. I had him all planned out, creating him a few weeks before Brewfest, then religiously knocking out the dailies so I could get the cool Brewfest duds.

I made him back before heirlooms existed, and before no-experience was an option. He was perfect. He was geared to the tits — and with me being a pretty experienced hunterer — he used to melt faces in WSG and AB. In fact, by the time he was fully geared and ready for BGs, it was almost boring he was so good.

Because of this, I’d often just leave him in his lederhosen for the duration of the BG. It was great… my 29 dwarf running around like one of the Ricola guys, toting that beastly Nesingwary quest gun and an Archeus with Savagery on it – just wrecking the horde.

Unfortunately, I ended up deleting Pilsner back when Blizzard ruined twinking, but his memory and his screenshots live on..!

Here he is with his trusty sidekick, DANZIG. 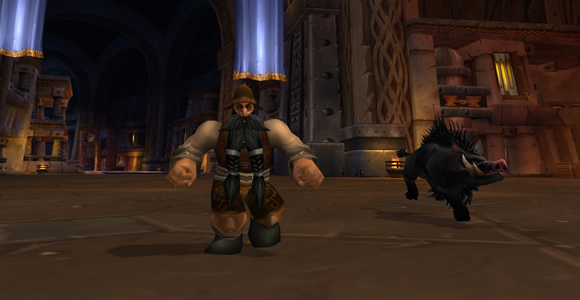 So there ya have it… Brewfest! I’m all about it.