See my Patch 4.2 Rare Pet Briefing Post for an updated guide on how to tame Skarr & Karkin, as well as the other 8 Patch 4.2 Taming Challenge pets.

There have been two more rare beasts spotted in the Molten Front. Thanks to lawman’s tip, I happened upon some valuable pet info over at the Petopia forums.

Neither of these two new pets are exotic, so hunters of all specs will be able to tame them. One is ferocity and the other is tenacity. Both of them, as far as I know for right now, have unique skins — and badass ones at that. 😉

Hold on to your hats folks, because these two pets are both pretty awesome…

Skarr is a rare cat found on various floating rocks throughout Fireplume Peak. Skarr possesses the same gem model as Blackmaw, an NPC pet who cannot be tamed. This particular skin has been very popular ever since it was first discovered. I first remember BigRedKitty pointing it out on his blog a few years back, then thinking… oh yea, I want that!

Skarr doesn’t seem to be one of the taming challenges in 4.2, and apparently his taming process is pretty easy. Based on screenshots I’ve seen, it appears you can freeze him using Trap Launcher*, then tame from a distance without having to jump to his island. This may change however, so if you do have to be on his island to attack him, then know that he can hit pretty hard. His hits start out soft, then increase in damage with each subsequent hit. From what I’ve read, he gains buff stacks with each successful melee attack — maxing at about 36K damage at 5 stacks.

* Freezing Traps no longer work on him. 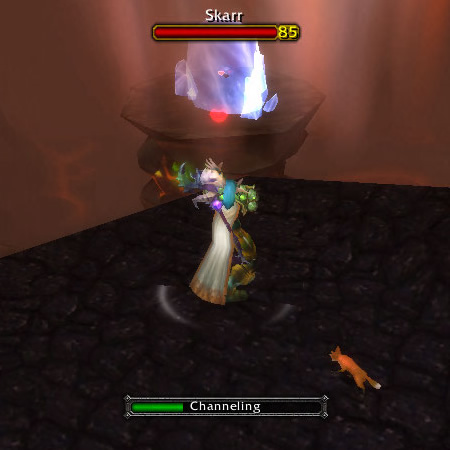 Either way, I imagine you could just freeze him instantly once you land on his island. The real trick to taming him will be getting the opportunity without a half-dozen other hunters there competing for him.

Skarr spawns on Fireplume Peak atop random floating rocks – how many possible spots, I don’t know. I do know this though… Skarr is going to be very popular amongst hunters. Prepare to have some competition for this bad boy.

Disregard the mention of him being trappable in the video. Skarr is now immune to freezing Traps. Anyway… here’s a sneak peek at this amazing new cat.

Skarr can still be tamed from a neighboring ledge it seems, but is no longer trappable. The trick is to survive his fire attack. A Core Hound’s Ancient Hysteria + Potion of Speed + Deterrence should get it done.

Karkin is a rare gem-skinned crab who spawns in the same areas as Skarr. He can cast a fire attack from range, but is also trappable just like Skarr. 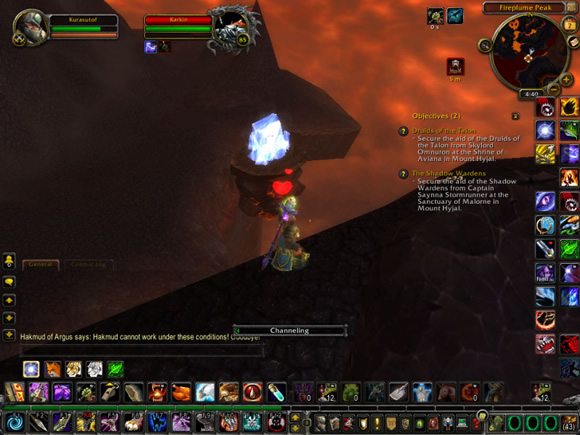 I’m not sure if Karkin alternates with Skarr on the same spawn timer. It’s too early to say for sure, but I’d imagine that’s the case. Regardless, I imagine they will be equally as desired, with Skarr maybe having a slight edge due to cats being a popular DPS/raiding pet, not to mention there are more cat lovers than crab lovers. 😉

Karkin would make for a nice steely PvP companion though… 🙂

As of 06/28, Skarr and Karkin are both tamable using the strat I outlined below the Skarr video above.

Where to find Skarr and Karkin

This map indicates one verified spawn location for Karkin. Since it’s believed that he and Skarr both share the same spawn points, I imagine Skarr will spawn her as well. 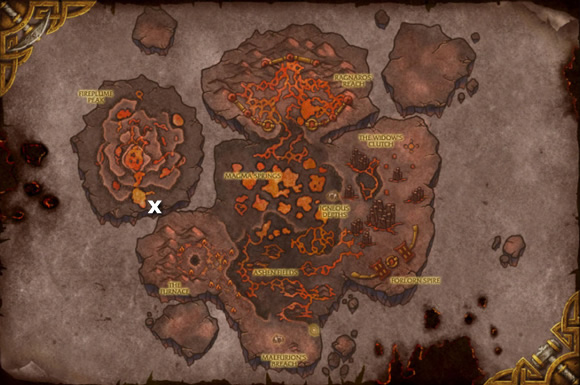 Expect that there will be additional spawn locations uncovered in the near future. I’ll try to post more of them as they are found.

Good luck to those of you hunting for them on the PTR!

For a comprehensive taming guide for all 10 rares in Patch 4.2, please see this post. Happy Hunting!