As many of you know… Patch 4.2 hits live servers today (06/28/11). The following guide serves as a rundown of the new beasties — where to find them and how to successfully tame them.

There are 10 new taming challenge pets in all. 3 new Spirit Beasts, 5 rare Lava Spiders, and 2 extremely badass looking metallic type pets — Karkin, a liquid metal crab, and Skarr, an obsidian cat. This is sure to keep pet happy hunters busy for some time… I know I’ll be on the hunt for a few of these myself. 🙂

For those familiar with the addon, NPCScan IDs have been included. Not sure if the addon will be updated with these new mob IDs, but you can add them manually if needed. See this post for details on how to do that.

For those of you not familiar with NPCScan, please familiarize yourself.

While maybe not as exciting as the WotLK beta bestiary, Patch 4.2 is still easily one of the biggest hunter pet events ever!

There are three new Spirit Beasts poised to hit live servers today (06/28/11) — all of them being released in Mount Hyjal. Hunters will first have to progress through a series of quests before the Spirit Beasts can be unlocked. They are located in a phased zone of Mount Hyjal, so only the characters who have progressed through the necessary quests will be able to see them.

Ban’thalos is a green spectral owl, and the first Spirit Beast with wings! Along with him are two new spectral cats – Ankha and Magria. They are almost identical to Gondria, but with different coloring. Ankha is a ghostly white, and Magria a spectral blue. 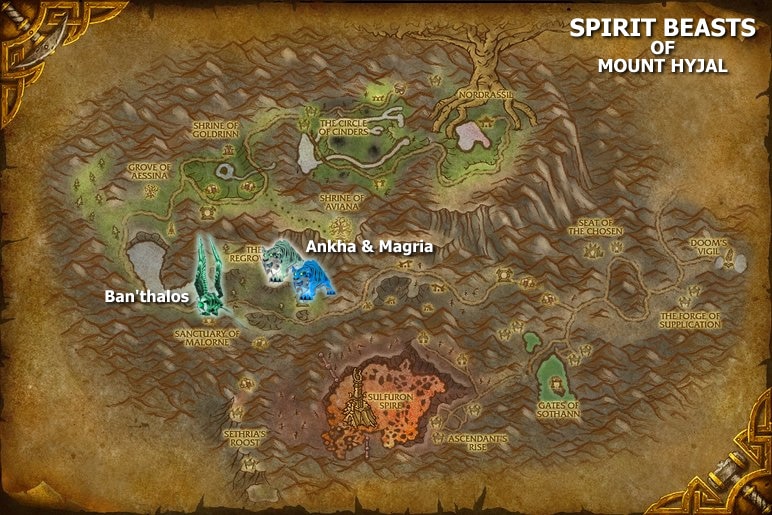 As with all of the taming challenge pets introduced in patch 4.2, the trick with taming Ban’thalos is surviving the taming process. Ban’thalos flies very high so you must find a way to aggro him while in flight, while avoiding freefall death. The other thing to watch out for is his nasty Harsh Moonlight spell. It will wipe you out fast, so it’s important to CC this guy.

From what I’ve seen, the best way to tame Ban’thalos involves perching yourself atop the highest tree that sits within his patrol area. Once there:

If you find it hard to position yourself atop the tree, or if you’re in a hurry to get the tame off, then you can try this same strategy from the top of the nearby statue. Fall damage will be more severe, but it should still work.

If your character is close to max level, then see this Ban’thalos taming guide instead. This updated post covers what you need to do to tame Ban’thalos if you’re closer to level 100.

Ankha cannot be CC’d, so hunters must survive through the taming process while getting beat on. The key to surviving Ankha’s onslaught is to take off all of your armor before you start the taming process. Ankha’s Metal Cleave attack scales off of its target’s armor rating, so it’s important that you remove any and all items which add to this stat. Ankha can easily one shot a fully geared player.

Ankha cannot be CC’d, so no Freezing Trap. Just get naked, pop Deterrence and get your tame on!

Taming Magria requires the exact same approach as taming Ankha — remove all of your armor first. Also, I believe that Ankha and Magria share a spawn timer, so it’s likely you’ll find one or the other, but not both of them.

Arachnid lovers rejoice..! Patch 4.2 introduces a whole new exciting pet model for you PvP fiends out there — the lava spider. Each one of these molten monsters poses a unique taming challenge for hunters. Read on to find out how to tame these bad boys.

To reach the Molten Front, players must first grind through about three days of daily quests in order to unlock the zone. Once unlocked, the spiders can be found in these areas… 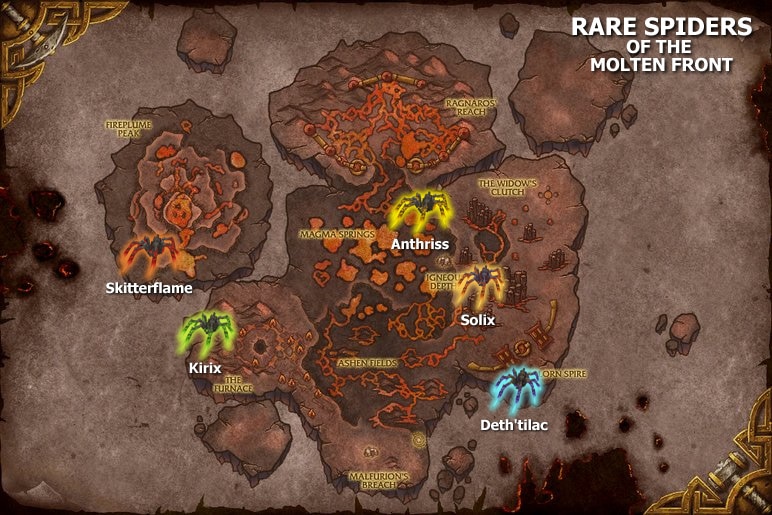 Solix has on him two nasty buffs:

These pose two problems… when both of these buffs are active he’ll not only tear you apart, but also, you cannot tame him. The trick is to slow him down. Hunters must use Ice Traps and Concussive Shot to slow him, while also running from him (while in Aspect of the Cheetah) to avoid damage. Be sure to place your traps directly in is path. Solix has a small hitbox for a mob his size, which means he has a greater chance of skirting by a trap if you’re not careful.

The longer Solix is slowed, the more his focus will drop. Once his focus bar reaches below 50%, then the Blazing Speed buff will be off. Once the buff falls off, you can start taming him provided he’s still slowed and at range. Deterrence is also advisable for a little added insurance. 😉

Note: If Solix reaches zero focus he will die. If he’s nearing zero focus and you’re not in a position for a successful tame, Feign Death, reset him and try again.

The best way to tame this guy is to hop on the floating rock across from where Kirix paths. From this platform, you can safely tame him with Aspect of the Wild on, using a Core Hound’s Ancient Hysteria buff, along with Deterrence. Ancient Hysteria will reduce the cast time on Tame Beast so that you can tame him while Deterrence is up – escaping his nature damage AoE.

Ancient Hysteria lasts for 40 seconds, so you can easily activate it, dismiss or abandon your Core Hound, then wait a few more seconds for Kirix to come around so you can begin the tame.

The trick to taming Anthriss is to avoid the Searing Web. Searing Web is burned off by lava, so if you wade in the nearby lava you’ll be immune to the effect. You’ll gain a buff called Web Master which means you’ll have neutralized the effects of the Searing Web.

Find the nearest lava pool to Anthriss that is deep enough for you to swim in. Next, approach Anthriss, fire a Concussive Shot, Disengage back to the lava until at swimming depth, hit Deterrence and start taming.

Update: 08/31/11 – Check out this post for a bit more in-depth guide and first-hand account of taming Deth’tilac. The strategy is basically the same as outlined below, but with a couple of additional tips based upon my personal experience with solo taming this beastie.

Of all the new Patch 4.2 beasties, Deth’tilac poses the ultimate taming challenge. Deth’tilac’s Deth Strike one shots anything within his melee range, so you have to keep him slowed and at bay. Kiting is absolutely necessary. Furthermore, if he’s not continually attacked, he gains a movement speed buff, so you need to be applying constant pressure. Most importantly, he cannot be tamed until he’s at low health. The problem… he has over 37 million hit points.

The thing to note about Deth’tilac’s Deth Strike attack is that it sacrifices 10% of Deth’tilac’s health each time he uses it. For this reason, the best way to go about the taming process is to repeatedly sacrifice your pet until Deth’tilac’s at low health, at which time his Molten Will buff falls off, allowing you to tame him.

A spider works best due to the web ability. The web’s snare allows you enough time to get off Revive Pet right after a sacrifice. If you don’t have a spider in your stable already, then just tame one nearby and use it.

After continuous pet sacrifices Deth’tilac’s health will drop low enough to where the Molten Will buff will fall off and you can begin taming. Just be sure Deth’tilac is still slowed and at max range, as you do not want to risk getting hit by Deth Strike.

Note: Be sure to tame Deth’tilac the moment Molten Will is down. If you wait too long, it’s possible for Deth’tilac to kill himself with a Deth Strike if his health is already very low.

What you need to do with Skitterflame is cool her down. When first encountered, Skitterflame has a buff up called Superheated, which prevents taming. In order to remove the buff, you must cool Skitterflame down with Freezing and/or Ice Traps. A word of caution though… if Skitterflame gets too cold, and her energy drops to zero, she will die. Also, if you kite her through lava it will heat her back up, refreshing her energy bar.

A good strategy for Skitterflame involves 2 Freezing Traps, plus an Ice Trap. This provides sufficient cooling, allowing for a tame, yet preventing her energy from getting too low.

Launch a Freezing Trap right on top of her, followed by another. Once the cooldown is up, place a Frost Trap right in front of her. By the time Skitterflame breaks free from the second trap she should be just about ready for taming as she is wading through the Frost Trap. If not, hit her with a Scatter Shot to keep her wading through the iciness. Pop Deterrence at the start of taming just for good measure.

Last but not least, there are two brand new and very nice looking pet models being added in Patch 4.2. One is an obsidian cat named, Skarr, and the other a liquid metal crab named, Karkin. These beasties are both rare, they share the same two spawn locations on Fireplume Peak… and are not exotic, so they can be tamed while in any hunter spec. Here’s where you can find them…

Spawn Locations for Skarr and Karkin 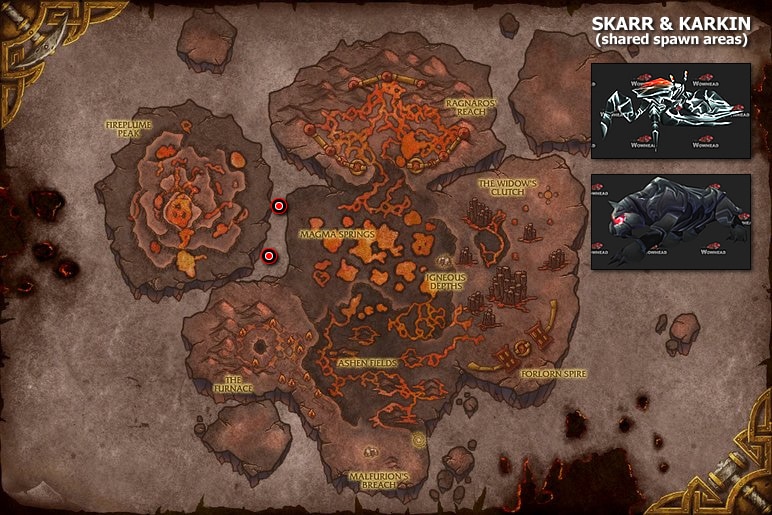 There are two floating rock platforms where Skarr and Karkin can be found. Also, it’s believed that only one of them will be up at once, so it’s highly unlikely you’ll encounter both of them at the same time. They seem to share a spawn timer, with alternating spawn times.

Early on, Skarr was able to be locked down in a Freezing Trap, but that luxury has since been removed. This means, once again… you just need to survive the tame. 😉

Skarr casts a fireball attack which does a decent amount of damage, increasing as you’re pelted with more of them. The easiest way to tame him is to:

Here’s a handy macro that will aid you in this process. Use it just after you’ve dismissed or abandoned your Core Hound…

If you’re MM spec you can use Silencing Shot to interrupt his cast – locking it out long enough to squeeze in a tame. About halfway through his first cast, fire a Silencing Shot at him, then start Tame Beast immediately.

The strategy for taming Karkin is identical to what you need to do with Skarr. Bring some haste buffs, use Deterrence to avoid his fire damage, and tame… The Silencing Shot technique works on him as well.

Well there ya have it folks… loads and loads of new exciting hunter pets to track down.

This 4.2 guide was put together using several sources, including: WoWHead, various YouTube videos, and of course… the ever helpful Petopia Forums.

Previous Post: « Getting Battle Ready as a Beast Master: BM Hunter PvP Talents and Glyphs
Next Post: How’s the Hunting? »