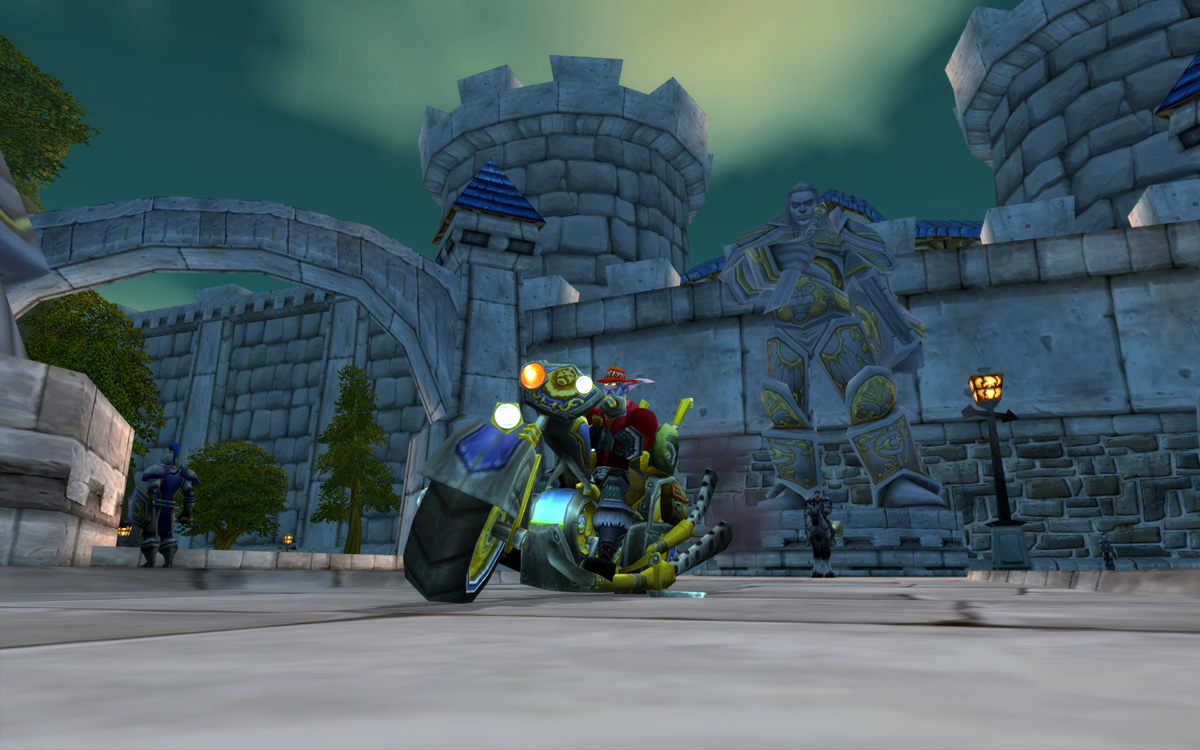 I put my Death Knight engineer-alt-b**ch to work in his custom shop. It cost me a grip, but oh man was it worth it…

Riding my new hog through the Eastern Kingdoms and Kalimdor, on my quest for World Explorer… 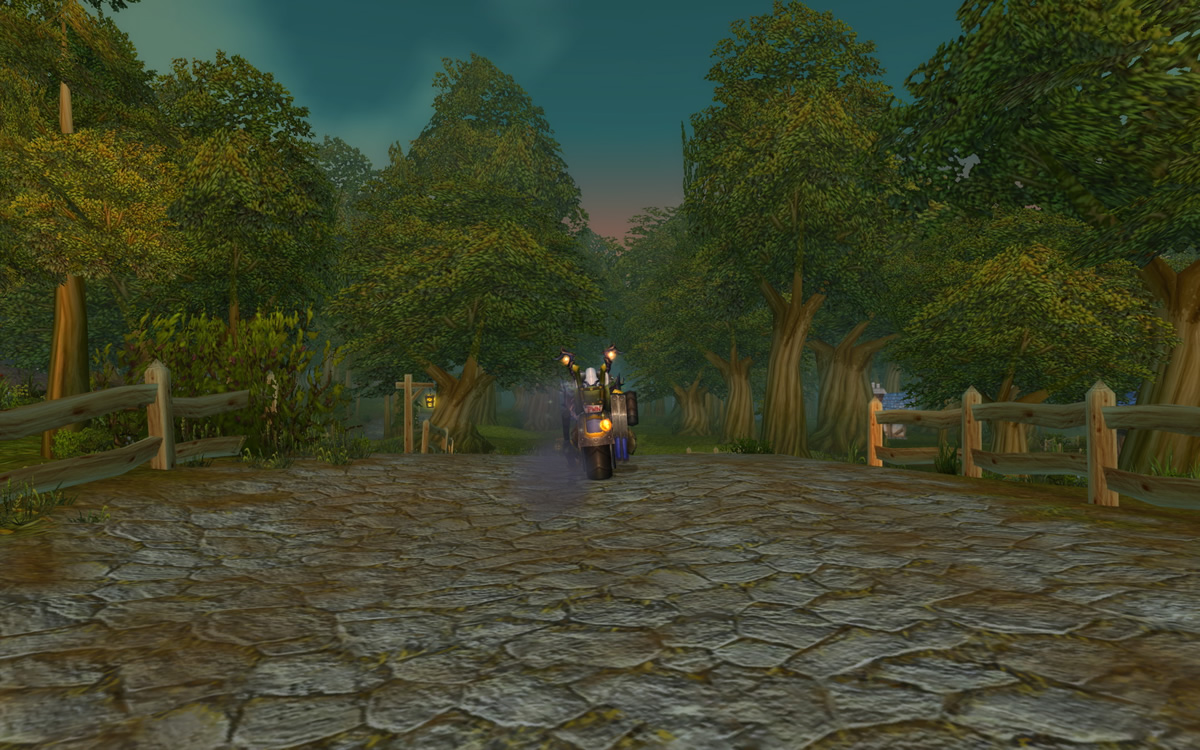 A little cliché, I know, but it still seemed fitting. 😉

That was a healthy chunk of gold, but hey… it’s only gold…

No other in-game purchase has filled me with as much satisfaction and delight as my new chopper.

6 months ago I would have never thought this possible. I was the sort of player who had scarcely more than 500G at any given time. So how did I do it..?

CLICK HERE TO BUY MY VIDEO AND FIND OUT HOW!

I have the updated honor system to thank for my vast riches. Well, that and the fact that I quit raiding about 4 months ago. I still participate in the occasional late night VoA farm-fest, but I put a halt to scheduled weekly grinds at the end of last April. Raiding has always been a huge gold-sink for me, so giving that up helped to curb the outflow.

Now don’t get me wrong… I love to raid, it’s just that I have to make choices from time to time, and my huntery intuition told me that I needed to spend less time as “Garwulf” during those prime evening hours. Ya dig..? I also pride myself on making such choices before problems should arise, rather than after. 😉

So anyway… without a weekly raiding commitment, this left me to my own devices. What to do..? The choice was easy… PvP my balls off. 😀

After a good night of BG’ing, provided I have an ample supply of tasty, cold barley pops in the fridge to fuel my play, I can earn about 60-70K honor. This I then redeem for 6-7x Cardinal Rubies, which then get mailed to my wife’s JC, whom I then use to cut said gems into 6-7x Delicate Cardinal Rubies. Those rubies earn me about 150-190G apiece depending upon the current AH surplus.

At times I’ll redeem for other gems, so as not to flood the AH, but I’ve found that Delicate Cardinals are the most lucrative. They sell like hotcakes.

Now I don’t engage in all-night PvP fests all the time, but I’d estimate that on the low end, I can make 1000G per week. If I’ve got the PvP bug, which I’ve had an incurable case of lately, I can earn in upwards of 2,500G for the week. On average, that’s about 7Kgold per month. Not too shabby…

So, as you can see… a battle-scarred, cigar-chomping war pig such as myself, can earn a pretty decent living nowadays. Only catch is, you have to like PvP. No poroblem here. 😉

The other thing I did to supplement my gold stores was to redeem Frost Emblems for Primordial Saronites, then flip them in the AH back when they were going for 1300G apiece. Rather than craft my Rock-Steady Treads right away, I sold my Primordials when the getting was good. 😀

Last night it occurred to me that it would be a fun idea to go for the World Explorer achievement. I hadn’t really been all that concerned with getting that one, but lately I’ve noticed a few of my guildies have been going after it. Then it occurred to me… what better time to explore the further reaches of Azeroth than right now! After all, things as we know them will be changing forever in a few months.

That’s when I decided to pull up the exploration tab in my achievement panel. Much to my surprise, there were dozens and dozens of areas in the old world that I had yet to fully explore. So, I then decided to embark upon a sentimental journey through Kalimdor and the Eastern Kingdoms.

At that point I stopped myself and thought, I’m freaking loaded (i.e., rich, wealthy… fri. and/or sat. nights are when the other definition may apply to me 😉 ) right now… if I’m going to go for World Explorer, I need to do this right! 😀 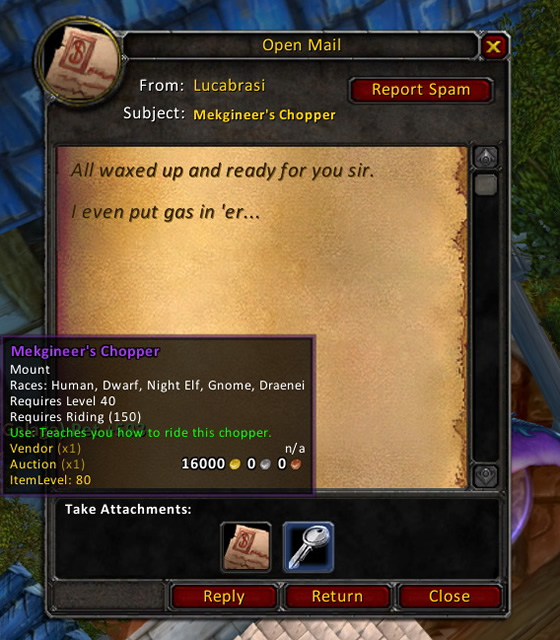 It was then that I logged onto my 80 Death Knight engineer and saw that he was about 80% of the way through Revered with Alliance Vanguard. Time to dust off the DK and put his ass to work! After about two hours of random Icecrown quests and about 4 heroics, Winds of the North flashed upon my screen. Woo hoo!

I flew over to see Logistics Officer Silverstone and purchased the Mekgineer’s Chopper Schematic as quick as you please, bought all of the needed mats, then crafted a war steed worthy of being graced by my elven tushy.

All told, Mekgineer’s Chopper ended up costing me about 13.9K, including the price of the schematic itself. It’s a good chunk o’ change, but oh so worth it.

Best part is, I still have over 12K left over, meaning I should be able to easily maintain my goal of having 20K G when Cataclysm launches. 🙂

Lastly… I was going to just post a screenshot or two and leave it at that, but damn… I’m excited..! I couldn’t help but add a few details. 😉 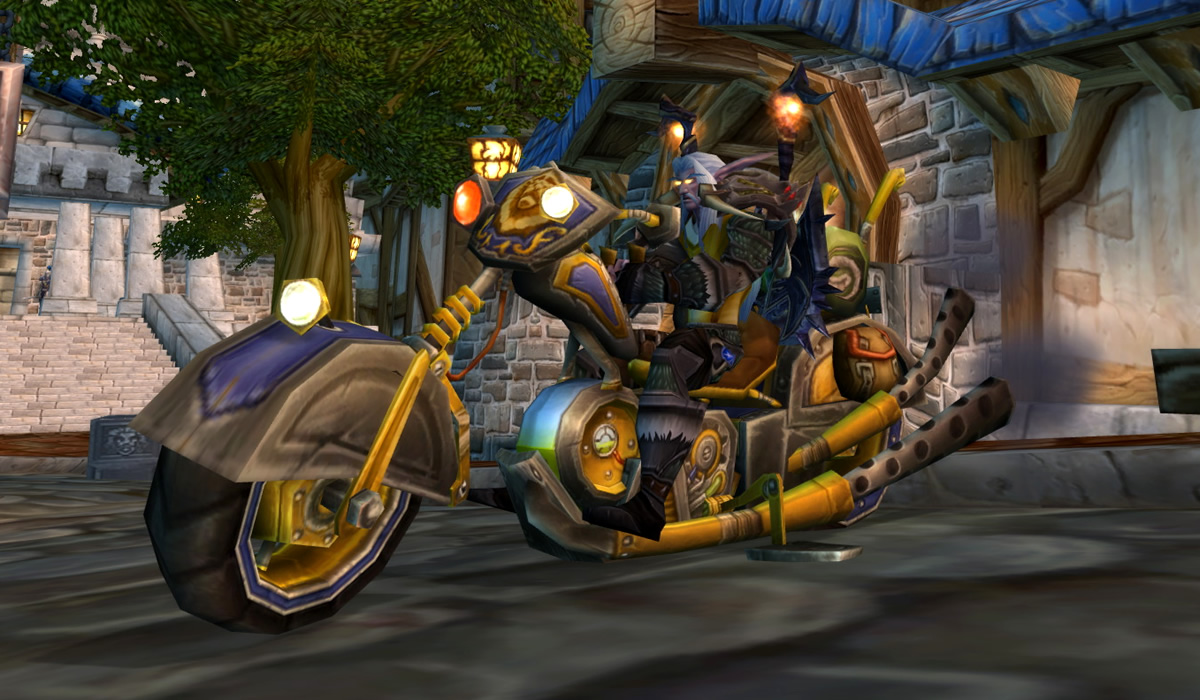 How fun is that though..? Not even I had any sort of clue that I’d be logging off last night with a sweet new ride. Impulse at its best. 🙂