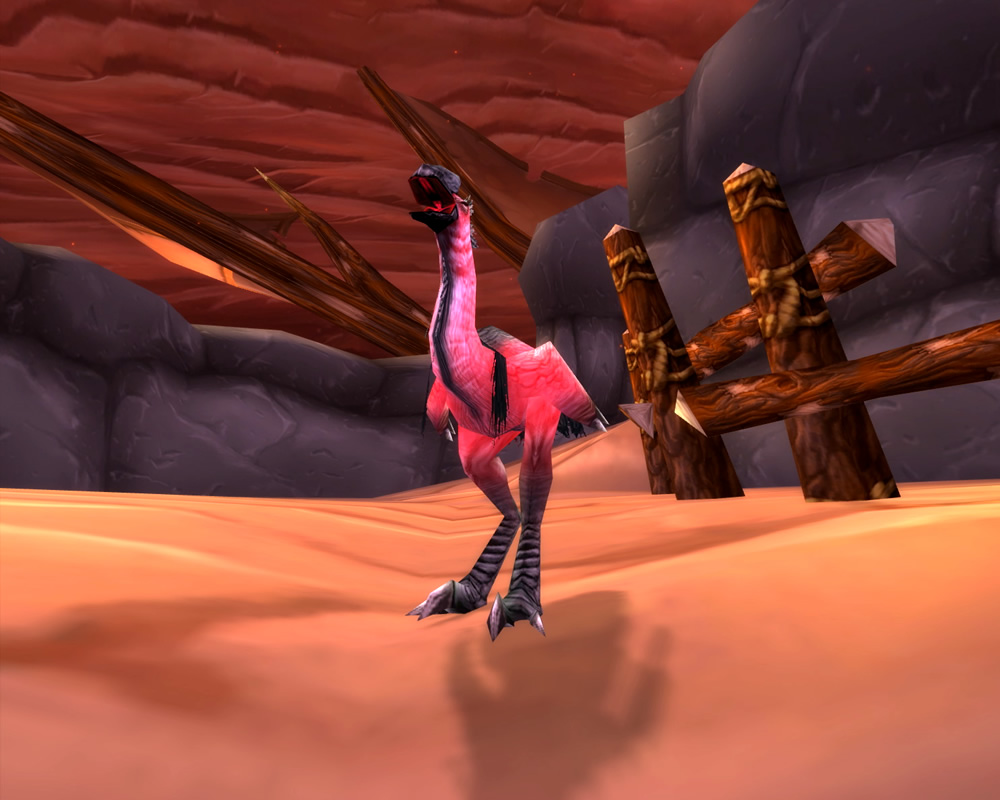 This is of course, Mazzranache, the rare pink Tallstrider from Mulgore. In addition to the obvious awesomeness of playing an Orc Hunter, taming new pets is another exciting perk of leveling a new Hunterling. Mazzranache was on the short list of rare spawn pets that I hadn’t yet tamed.

Once I finished up my level 10 pet taming quest chain, it was off to Mulgore to find the walking and squawking lawn ornament who resides there. Once I got to the area where he patrols, I ran back and forth across Mulgore trying to put a bead on him. I didn’t bother with a target macro because as you can see, he’s pretty easy to spot.

After about 15 minutes with no luck, I decided to make a target Mazzranache macro just to make sure. Within about 2 minutes I had him targeted. Of course, it was right at this moment I was being attacked by 3 cats, so I ended up losing him for another minute or two. You can’t go five feet in Mulgore without tripping over a buzzard, cat or wolf. The place is teeming with hostile wildlife.

After I targeted him a second time I looked around to make sure there were no other players in the area, then threw my Hunter’s Mark up so that I could hone in on him. Much to my surprise, he was in plain view and pretty close by. In fact, I had probably run past him at least 3 times prior. 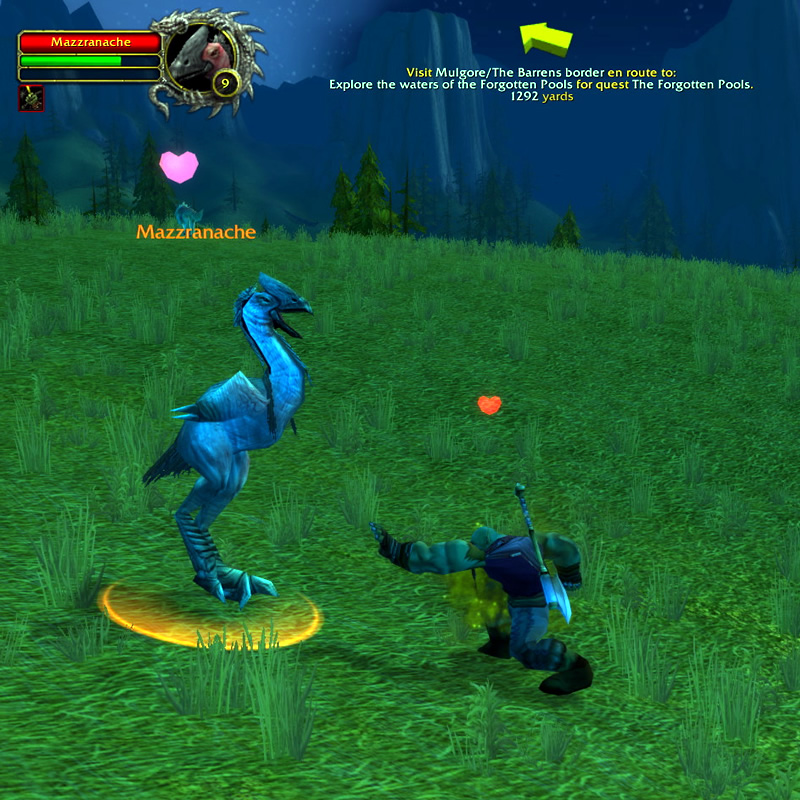 That’s not the infamous pink bird I’d seen so many times before on the internets… what the hell is this..?!

I was quite disappointed at first and immediately thought that Blizzard had broken him in a recent patch. I almost thought to abandon him and just go after The Rake while I was there, but then I thought well… maybe we’ll wait and see.

The night sky in Mulgore casts a strange hue, so I figured he might pinken up once we got out of the twilight. I was right. As soon as I was indoors at Thunder Bluff he was looking sassy again. 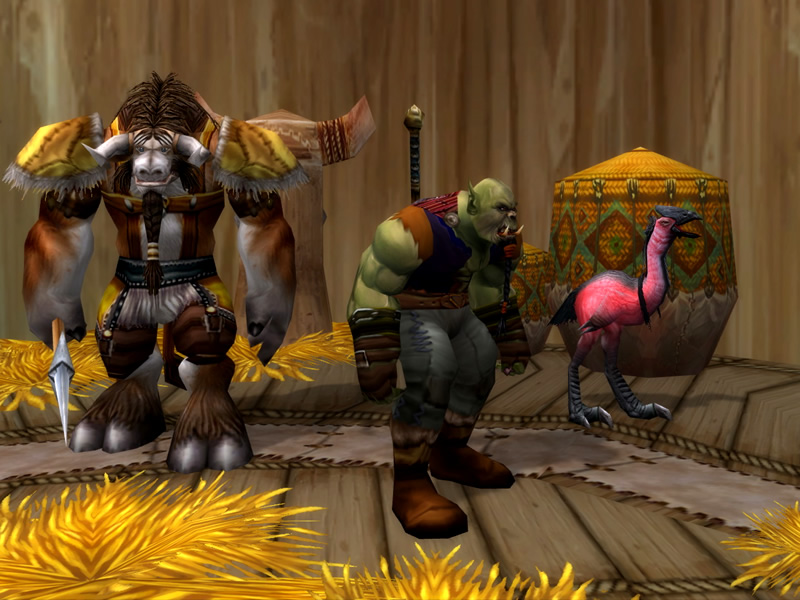 So… any of you Hunters who are out patrolling for this rare spawn, know that he blends in with the local wildlife… at least he does during the nighttime hours. Be sure to use a target macro or you’re very likely to miss him. I’m not sure how he looks in the daylight, but either way I have a hunch he’s bi-textural. He, He.. snort, snort… Kek… get it… bi-textur… okay… lame joke.

Alright, so Mazzranache was the first pet I went after, and I’m still using him as my primary pet at level 24. In fact, I’ll probably be hanging onto this pet for awhile, not only for his cool and unusual look, but because I’m finding Tallstriders are fantastic pets at the lower levels.

At level 15, I grouped with a 13 Mage, 15 Shaman, and 13 Paladin (who was mainly afk) to run Ragefire Chasm. My pet ended up tanking the whole instance and it was a breeze. Not that 3 1/2 manning RFC is that much of a feat, but I thought it was pretty cool that my pet was able to handle the tanking duties at that level.

Apart from me being specced 5/5 into Endurance Training, the other thing that gave my pet an edge was the Tallstrider unique ability, Dust Cloud. Dust Cloud causes all enemies within a 10 yard radius to miss on their next attack. This is a nice skill for lower level content since it doesn’t interfere with CC. Dust Cloud provides a debuff that doesn’t cause damage, so you don’t have to worry about it breaking sheep.

Whether your pet is tanking or assisting the MT, having it be able to cause a group of 3-4 mobs to miss on their next attack is a huge bonus. It’s also nice for questing and soloing, because it seems as if it grabs aggro even though it’s not a damaging attack. I need to do a little more investigation into this, but it appears to me that as soon as my bird kicks up his Dust Cloud, any mobs that I was pulling off of my pet due to aggro gain end up returning to him.

My suggestion is that if you do decide to give a Tallstrider a go, place Dust Cloud on a keybind so that you can use it when needed. The cooldown is a bit long at 40 seconds, so it’s better to have it available when you need it most than to have it blown unnecessarily due to auto-cast. I know… levels 10-20 is hard. 😉

I had gone back to trying a Hyena again at one point, but then I remembered why I never stuck with one. I can’t stand that noise they make. Tallstriders could be considered a little annoying I suppose with their screeching, but that’s never bothered me. Go figure.

I’ll probably grab a cat, raptor, or maybe a bear pretty soon as I continue on my journey to 80, but for now I’m digging on the Tallstrider.