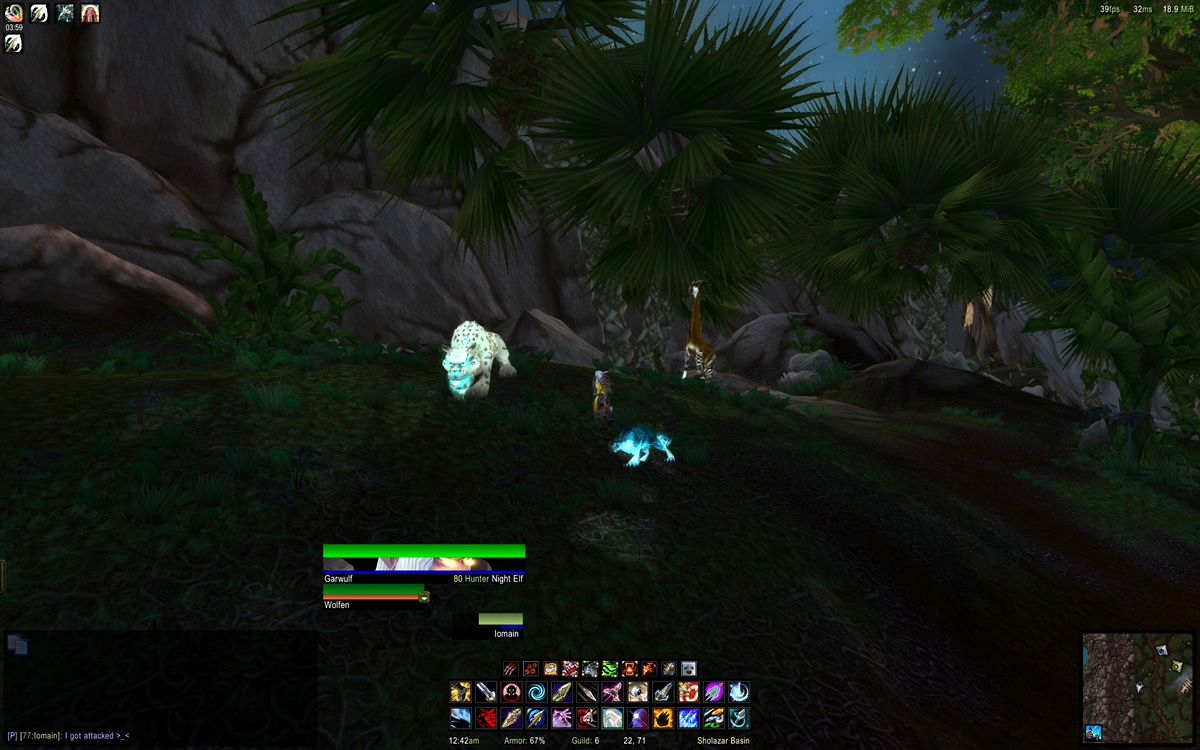 Alright, so most of you are well aware that I’m fairly obsessed with rare Hunter pets. Well, it should be no surprise to you that every time I go to Sholazar Basin to do anything, I always make a quick pat before I go just to see if I can spot any of the rare beasties.

Last night I flew over to buy my weekly egg from the Oracles, still hoping that one day I’ll be fortunate enough to get that gorgeous mount to hatch from one. Once that was done I flew around the basin looking for Aotona, King Krush and Loque’nahak. Well, there were no sightings of the previous two, but just as I was making my last round west of the Nesingwary Camp guess who I ran into..?

Keep in mind that I’ve only seen Loque alive three times, including the incident last night. The first time I saw him was when I arrived just in time to watch a BE Pally lay the death blow on him, and the second time was when I tamed him. Loque’nahak is by far the most elusive rare pet I’ve encountered in this game.

My initial thought was to ask for a finder’s fee in general chat in case there were any Hunters there seeking him. Then I thought, eh… maybe I’ll take this opportunity to get one step closer to the Frostbitten achievement. Nah… he’s too magnificent to kill.

Right after this is when the little angel on my shoulder told me to look in my guild tab and see if any Hunters were on that might want him. One of our Druids in the guild who also has a 77 hunter alt happened to be on. He has a thing for cats too. =^_^=

I quickly sent him a tell asking if he was interested in having a Spirit Beast pet. He replied with a resounding “YES”. I said, “well you better get your ass over here and quick like”. He then replied, saying that he needed to do something real quick and then he’d hop on his Hunter. It occurred to me he wasn’t aware just how rare this find of mine was. >.<

While I’m standing guard over Loque’nahak hoping to fend off would be poachers, an Orc DK swoops down to mine a saronite node that was there. I’m sitting there thinking, oh well… looks like my guildie won’t be taming Loque today. Either the DK was a bot, totally oblivious to the enormous white cat with glowing blue tattoos just a few feet from her, or she was totally cool and figured I was going for the tame. Whatever the reason, she mounted up and split.

A few more minutes go by and I’m starting to wonder what the hell this guildie of mine is doing. Next I see his health bar start to dwindle and I’m thinking what…?! Then he says he was just attacked. I’m thinking, just attacked..?!

He was stopping to mine nodes along the way, then happened to get jumped by a Horde player while stopped in Wintergrasp to get some Titanium.

Needless to say, after about fifteen minutes of waiting for him, he finally arrived and was able to successfully tame Loque’nahak without incident. Some people are so freakin’ lucky I swear.

Although he was really excited about obtaining his new beautiful pet, he asked me why it was so slow and where the heck the moonfire was coming from. My response was of course, turn off prowl and… you’ve got to be kidding me…

I had spent countless hours researching the spawn points and camping this guy, which included nearly two solid weeks of patrolling Sholazar Basin, before I was fortunate enough to get him. Thanks to me he was able to tame the coolest pet in the game without even know what he was getting. That, and I was also there to lay a Freeze Trap for him. 😉

I did my good deed for the evening. Maybe that will bring me some good loot karma for the coming week. 😀