As some of you may have guessed if you’d read my previous post, I grew pretty bored with the BM spec I was trying for PvE. This whole dual spec thing is adding a whole new dimension of complexity to things, for me anyway. At first I loved the idea of dual speccing, but now I wish I could dual spec within the specs…lol. 🙄

Now that I’ve gone back to a BM raid spec and have found it to be a bit mundane, I’ve decided that I’m going to force myself to go back to my previous MM spec and stay there. Although I missed my big red pet, the 7/57/7 MM spec was pretty effective. Big red pet will have a chance to play when I do dailies, enter the arena, or hit up some battlegounds.

However, I am loving my BM PvP spec. I feel like an iron man on the battlefield. The spec is not vastly different from what I ran with before 3.1, but my pet received some love from the patch and I did shift a few glyphs around.

I’m going to move a couple of points around and once I do, here’s what I’m going to be using: 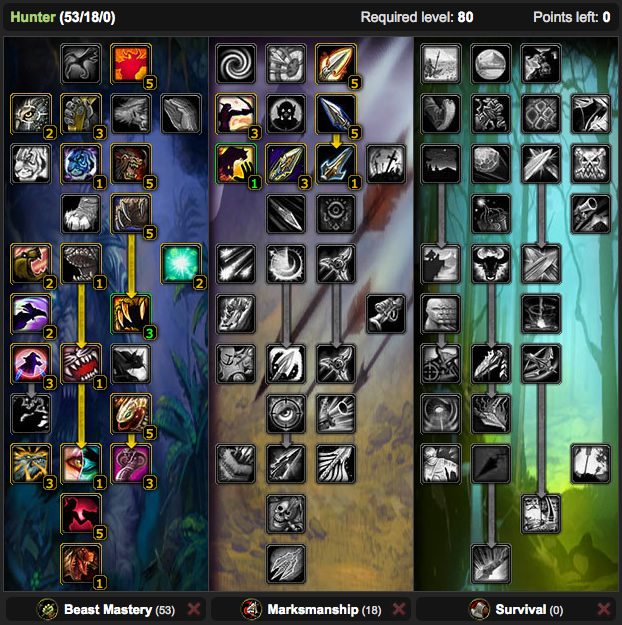 This spec is pretty close to what I’m currently using, and what I’d used prior to 3.1. The differences between this spec and my previous 53/18/0 PvP spec are the 3 points in Improved Aspect of the Monkey over Thick Hide, and the 2/2 in Animal Handler, resulting in 1 point pulled from Improved Mend Pet and one point from Frenzy.

The 3/3 in Cobra Strikes is also something new I’ve been playing with. I’m thinking this change may provide some needed burst, especially in arena where pets will have a tougher time getting crits.

The 6% dodge bonus seems like it may be a more useful buff than the additional armor from Thick Hide, but I guess we’ll see what we see. I’ll be somewhere around 31% dodge in my PvP gear with this change. The 2/2 in Animal Handler will help when the matches last beyond the big red phase, or when my pet becomes a target.

The glyphs I’m using are the following: Glyph of Bestial Wrath, Glyph of Aimed Shot and Glyph of Mending. Damn, how I miss the Monkey Glyph… 🙁

Glyph of Bestial Wrath is a no-brainer for BM, you gotta have it. In BGs this really shines. In arena, you don’t always reach the second BW. On the occasions that I do, being able to pop this usually determines the outcome of a close match.

The Aimed Shot glyph is money due to the 2 second cooldown reduction. Keeping the MS debuff up on opponents is critical, not to mention how invaluable it is having one of our only instant-cast burst shots on an 8 second cooldown as opposed to 10.

The Glyph of Mending is a new one for me. I see it as a worthwhile Glyph for PvP due to the synergies mend pet will receive with this glyph and 2/2 in Spirit Bond. Since I choose to go without Improved Revive Pet, this glyph is added insurance that my pet stays up. I’ve really only seen the benefit from the 4 second revive in a raid setting. In arena it’s highly unlikely that you’ll get the opportunity to revive your pet, and if you do, good teams will usually just nuke it down again anyway. In BGs I typically don’t have too much trouble keeping my pet up, but this new glyph will increase pet survivability even further.

Another thing I really like about this spec, is it’s versatility. I can use it just about anywhere. It’ll be outstanding for soloing content, and while not the most ideal setup for dungeons, it still allows me the ability to switch it up if I want to

bring the Ferocious Inspiration buff to my raid if another MM is present. Apart from IAotH, it possesses the key DPS talents from the BM tree. I doubt I’ll ever switch to it much for raiding, if at all, but it’s nice to know that it’s still a viable option.

Well, stay tuned for more as I continue on my journey in search of dual spec harmony. It’s almost a given that my specs will be in a state of flux for the next week or so, so bear with me while I think out loud on my blog posts. 😉 feel free to chime in with any questions, thoughts or ideas. I’m all ears.