All of this talk about BM PvP pet builds and such has caused me to realize that there are other choices out there besides Spirit Beasts. 😉

During the first few months of Cataclysm, I tried out a few different pets for PvP, but ended up settling with Ghostcrawler as my go-to PvP companion. The DPS, the Spirit Mend, the stealth ability… there’s just too much awesome there for me to not want to use him. Spirit Beasts are without a doubt, one of – if not the all-around best, BM PvP pets in the game right now, but I think another reason I’m so attached to using them is because we were deprived of their usefulness for so long. Apart from the thrill of acquiring one, Spirit Beasts served no real purpose for me back in WotLK. I never raided with one… I very, very seldom would PvP with one, and I hardly ever used one when out farming or questing.

I would have liked to, but there were always better pet option for just about any aspect of play. That all changed when Spirit Strike got replaced with Spirit Mend and SB’s received Roar of Courage. All of a sudden, Spirit Beasts were the ‘it’ thing. So, after having been deprived of using one for so long, I’ve been getting my fill. 🙂

However… this past week I decided it was time that GC and I discuss the possibility of me PvP’ing with other pets now and again. I’ll still be bringing him out of the stable, but I felt it was time I started mixing things up a bit.

Since I had abandoned Nuramoc to make room for the Patch 4.2 rares, I needed to go out and tame a new Chimaera. Considering I’d been wanting to trade my pink and purple model in for the amazing new blue and white model of The Razza anyway, I was on my way to Feralas quick as you please.

For those of you unaware, The Razza is a rare spawn in Feralas that’s been in the game since vanilla. When Cataclysm hit, The Razza received a makeover — getting the same alien model as the Outland Chimaeras, where as before he had the tattered-wing model of the Winterspring Chimaeras. He looks very badass now, and… he’s a unique rare — two qualities I tend to look for in pets. 😉

In addition to his awesome new skin, another of the changes made to The Razza for Caytaclysm is his spawn location. If you’re a BM Hunter looking to add this cool beastie to your stable, don’t refer to the map on WoWHead, as it’s still showing his old spawn location.

The Razza now spawns in the eastern part of Feralas, right here…

The Razza Spawn Location in Feralas 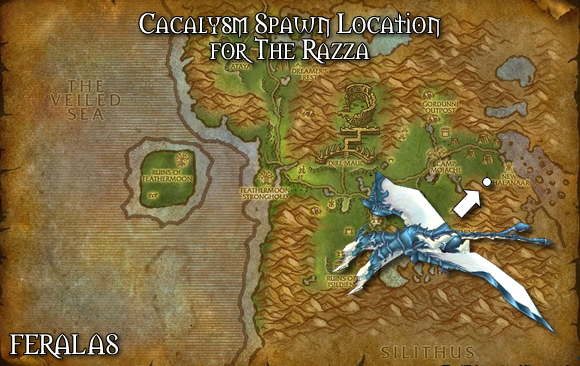 His coordinates are approximately 84.0, 50.0 — right smack in the middle of a Gnoll camp.

Taming him is no trouble at all, given that you have to be 69 in order to get him (with the Beast Mastery talent), and he’s only level 40.

After giving the Chimaera another chance, I have to say that I’m pretty happy with it. I’ve also tweaked my PvP build some, which maybe is adding to my overall experience in BGs. I’ll post on that soon.

Chimaeras have a ranged slowing ability called Frost Breath which is helpful for kiting enemy players, as well as for slowing enemy flag carriers.

The other ability they have is something I’m not real sure if I like just yet. Rather than provide a buff, Chimaeras have an AoE ability called Froststorm Breath. It deals AoE frost damage in a fairly small frontal cone. The ability does decent damage and each of its four ticks can crit, however, it is a channeled spell and cannot be interrupted.

The problem I have with it is that during the casting of Froststorm Breath, the Chimaera cannot cast any other abilities – including Dive. This also means no Wolverine Bites, no Bites, no regular attacks, no Frost Breath, and if you cast Kill Command during a Froststorm Breath cast, it will interrupt it.

In short, I see it as a situational ability for PvP. It could probably have some fine uses for PvE, for added AoE DPS, but using it in PvP seems to be a DPS loss, as far as single-target damage is concerned.

So far, the only times I could see using it would be: when trying to flush out a nearby stealthed enemy, when facing an enemy with high physical damage mitigation, or when trying to AoE a group of enemies trying to capture a flag in a BG. I’m sure after more testing I’ll find some other uses for it, but those are a few situations that come to mind.

Froststorm Breath does do some decent damage during Bestial Wrath, and as I’d mentioned each of the four ticks can crit. I was seeing crits in the 8.5K range quite often, with some casts doing around 25K damage total. Considering you can sandwich it between two Kill Commands during Bestial Wrath, that translates to about 7 seconds worth of pretty insane pet damage.

One thing that kinda blows about Froststorm Breath is its relatively small range. You have to be within 7 yards of your target, and the cone extends maybe only 15° in either direction, so it’s a fairly small AoE. I think the ability could be improved considerably if the range were extended to say 15 yards, and given a 90° frontal cone.

The image below shows what the actual range looks like in-game. 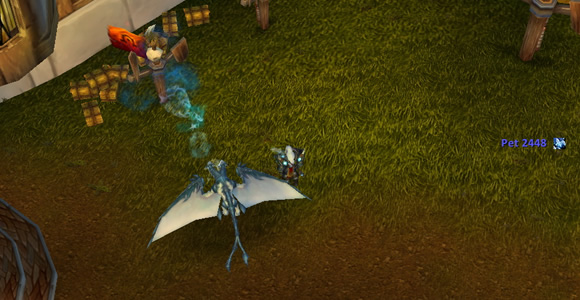 Another thing to note is that the Froststorm Breath ability needs to be micro-managed, as it cannot be auto-cast.

I think to get the most from the ability, it will require some experimenting with it, but all in all… I’d say that the Chimaera is a fine choice for a PvP companion, even if only for its ranged slowing ability (Frost Breath).

Back in WotLK, the Chimaera was my favorite PvP pet. I loved it when Froststorm Breath functioned like Frost Breath, but had the added damage portion. Those were the days…

In closing, I highly recommend The Razza for BM Hunters looking for a good PvP pet. He can be easily nabbed at level 69, he looks great, and as outlined in this guide… he has some nifty abilities.

Any of you use a Chimaera regularly for PvP? How do you like it?