When commenting on yesterday’s post about Aotona, one of my readers asked me to share the path I used to patrol for Loque’nahak. Well, because it’s been awhile since I posted on the subject, I decided to throw together an updated map for Fushae and the other folks at home. The new map contains my route, as well as some additional spots you may want to check for other rares in the Basin. 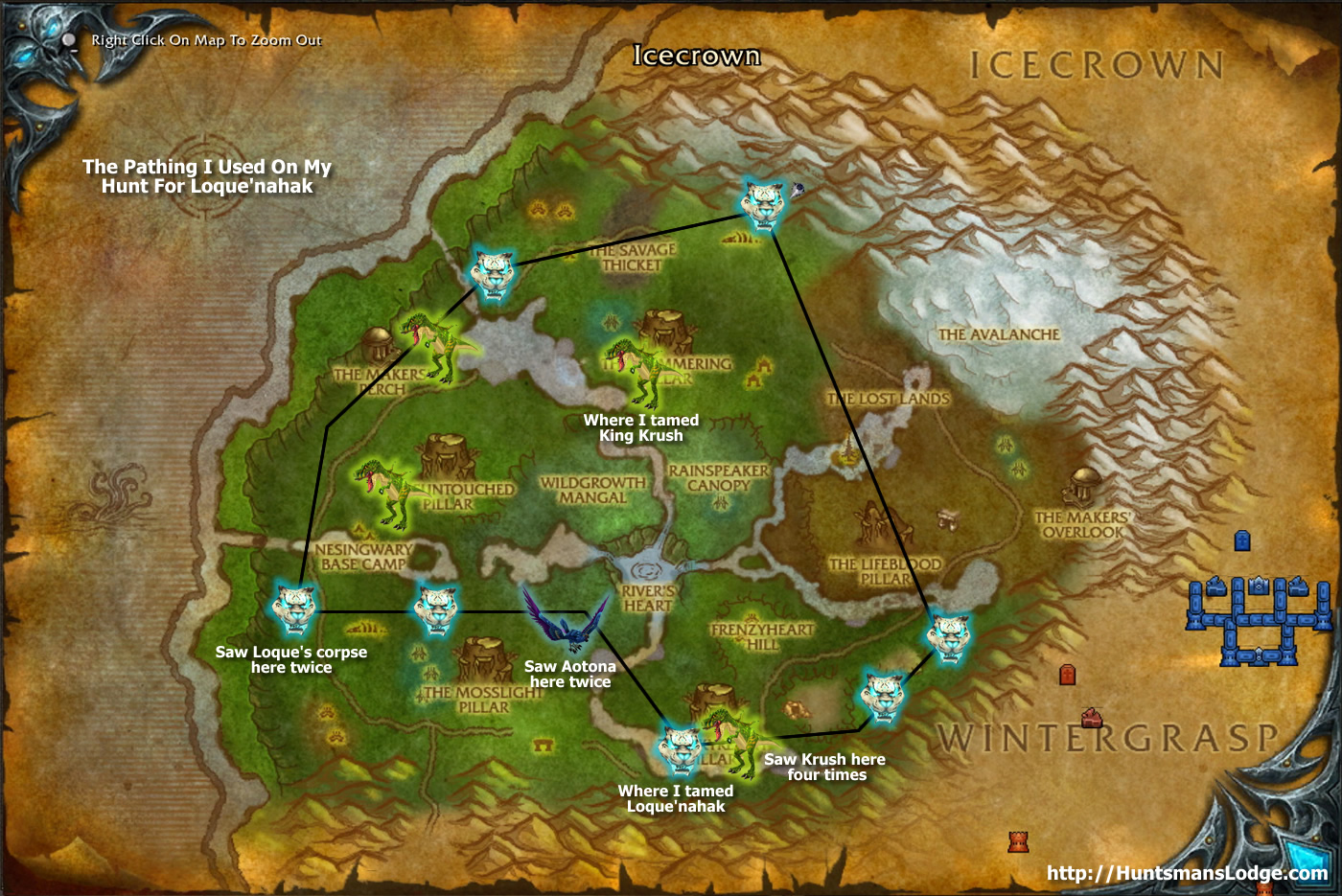 I took my original map of Loque’s spawn points and added King Krush and Aotona to the mix. I can’t confirm or deny, but some people seem to think that the spawn times between the rares are connected in some way. Knowing when the other rares are up or have despawned may help to narrow down possible respawn times.

It is possible, because it just so happened that the time I did manage to find Loque’nahak I was actually waiting for Krush. He had been killed roughly 12 hours earlier, so I decided to return 12 hours later hoping he’d respawn. Instead Loque popped up right in front of me. I thought, ooohhh… bonus! Here’s what happened next.

The Loque’nahak icons on the map represent locations I feel are legit. There may be more, but I can’t put my stamp of approval on those.

The same goes for the King Krush locations. I’ve personally only seen him in 2 places in the basin, but I’ve viewed screenshots that definitely show him by The Maker’s Perch and Nesingwary Camp.

Aotona I’ve only seen twice, and both encounters were in the spot I’ve noted on the map. Wowhead shows additional spawn points, but I dunno. I wasn’t camping Aotona.

So there ya have it. If you’re looking for any of the rare beasties in Sholazar I hope this helps. Also, be sure to mash yer macro when patrolling the area.

Rare Finder is a nice addon to have if you’re serious about finding one of these pets or completing the Frostbitten achievement. I’d link to it, but I’m not finding it on Curse or WoWInterface at the moment. I recommend using Wowmatrix for all of your addons anyway, and it’s definitely in there.

Aotona was a good distance away, and only was targeted by my macro for a second, but Rare Finder sounded an alarm and put a message into my chat screen showing what I’d targeted. I quickly circled around until I retargeted her and then went in for the kill. It was me or the parrot. Hunter vs. Macaw in a fight to the death. Polly got no more crackers that evening. 😉 Alright… enough tom-foolery. Go get your pets people! 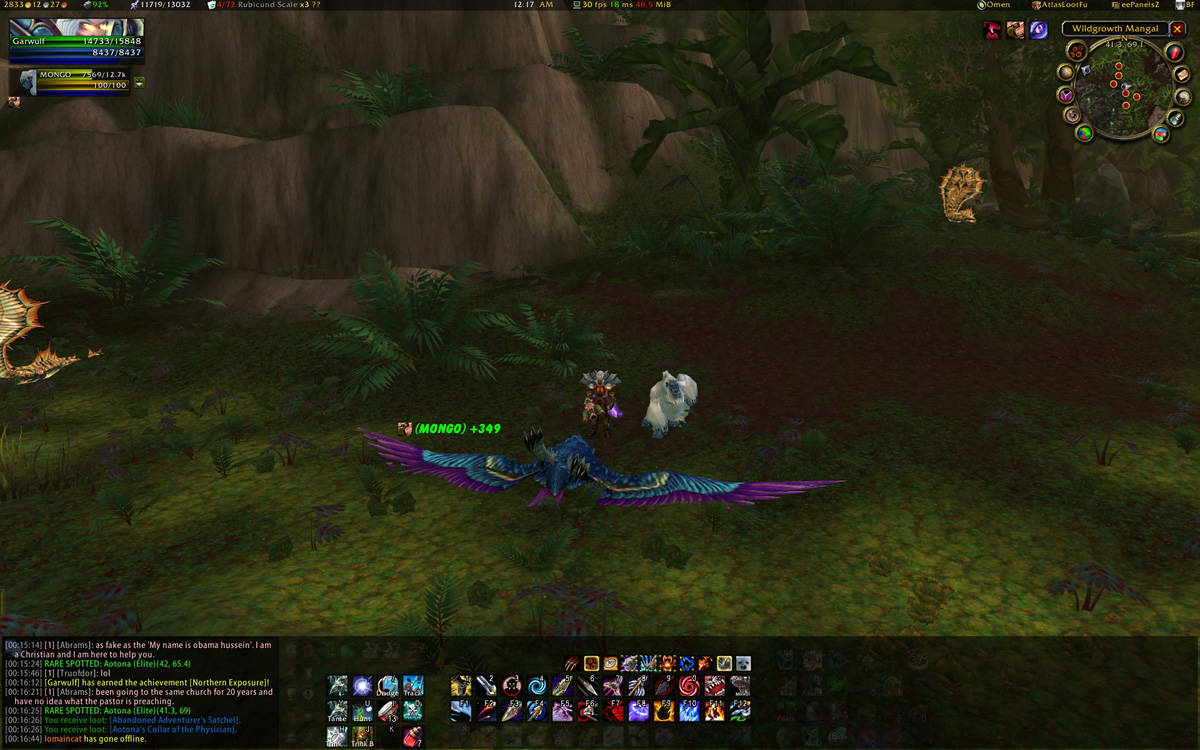 I just read on Mania’s site that Aotona, the rare parrot in Sholazar Basin, is currently tameable on the Patch 3.1 PTR. That would be so cool if this goes live. I won’t have any available stable slots on Garwulf, but it might give me good cause to level up my 58 Dwarf SV Hunter.

I’ve only seen Aotona twice throughout all of my time spent in Sholazar Basin. The first time I killed her (knowing she wasn’t tameable) for the loots and the Northern Exposure achievement, and the second time I happened upon her corpse. This bird is super rareski.

Although I was spending a bit more time near Loque’nahak’s and Krush’s spawn points, I was spamming my macro anytime I was making my rounds past the interior of the Basin, which was quite often. I have seen Loque’nahak a grand total of 3 times, Krush 5 times, but Aotona only twice.

This is truly an awesome looking bird, and would make for a really coveted Hunter pet. For the full story, as well as a post-tame screenshot, visit Mania’s site.

Check out this post to see the King Krush solo-taming video.

…did I ever tell ya ’bout the time I tamed that great big massively monstrous Devilsaur in Sholazar Basin, known as “King Krush“. Oooohs and Aaaahs ensue… 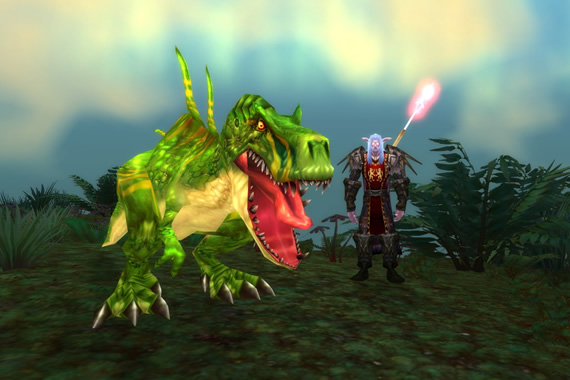 For those of you unaware, King Krush is a rare exotic pet in Sholazar basin, only tameable by Hunters with the 51 point Beast Mastery talent, and is probably the biggest taming challenge in the entire game. He’s only level 75, but he hits like a wrecking ball and casts a 5 second fear that interrupts taming. Solo-taming him requires a little extra effort.

Alrighty… here’s the story on how I successfully solo tamed this beastie. I know I’m probably not the first guy to have pulled this off, but I have yet to see a comprehensive and detailed guide on how to do it. So here ya go.
END_OF_DOCUMENT_TOKEN_TO_BE_REPLACED

YouTube just finished processing my video, so here ya go… Watch it in high quality and FFS turn it it up! Enjoy.

This is my first real World of Warcraft video. I edited it on my mac after watching a couple of quick tutorials on the intarwebs. I’m a recent Apple convert and let me tell ya… I’m not looking back. Apple > PC.

Technically, my Loque’nahak taming video was truly the first, but it sucked and was unedited.

I spiced this one up a bit with some Mr. Kilmister, aka Lemmy. I had this Motorhead song stuck in my head last night when I conjured up the idea to go after this guy, and well… it just fits.

Let’s see here… list of things to do in World of Warcraft on my Hunter… solo tame King Krush… CHECK!!!

It wasn’t much of a campaign. After only about an hour and a half of casual searching I spotted him just SW of the Glimmering Pillar. He tried to beat me down again, but I prevailed.

Stay tuned for the video.