At any rate, the pet I want to talk about this evening is King Krush. For those of you who don’t know who King Krush is, well… he’s a rare green Devilsaur who lurks in Sholazar Basin. He’s been a prized trophy sought by hunters due to his unique skin, along with the sense of accomplishment that a hunter can derive from successfully solo-taming him. END_OF_DOCUMENT_TOKEN_TO_BE_REPLACED 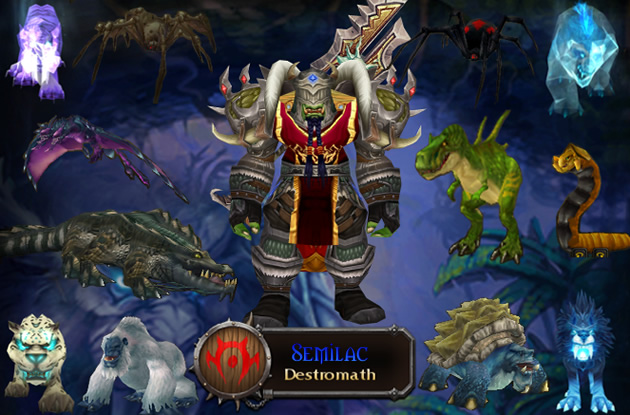 With Deathwing preparing to tear Azeroth asunder in just a few short weeks, now is a great time to venture out and snatch up any rare pets you’ve been thinking about taming. Once Cataclysm hits, it’s possible some of them may not be around anymore. Certain one-of-a-kind pets like Araga and Strider Clutchmother may be on the verge of extinction, as well as quite a few other unusual and/or rare spawn pets.

The other thing to keep in mind is that the world of Azeroth as we know it will be changing forever. The next few weeks can be a nice opportunity to take it easy, go hunting for some pets, and see the world. We’ve got two dozen available slots now and a lot of new special pet abilities to play with… go have some fun.

The screenshot at the top of this post was sent in by a long-time reader, Semilac. I have to say… that is one impressive stable, not to mention a very cool WoW Hunter pet montage. All four Spirit Beasts, King Krush, Nuramoc, Uhk’loc, … very well done! END_OF_DOCUMENT_TOKEN_TO_BE_REPLACED

New information has filtered in via one of my readers (thanks Newa) – – Tame Beast will be on a much shorter 10 second cast timer (down from 20 sec.) after Patch 4.0.1, thus canceling out the issue of fear vulnerability. So… carry on… nothing to see here. 😉

One of my long-time readers pointed out to me that come Tuesday (provided the patch goes live as planned), solo-taming King Krush and/or The Beast will be all but impossible. END_OF_DOCUMENT_TOKEN_TO_BE_REPLACED 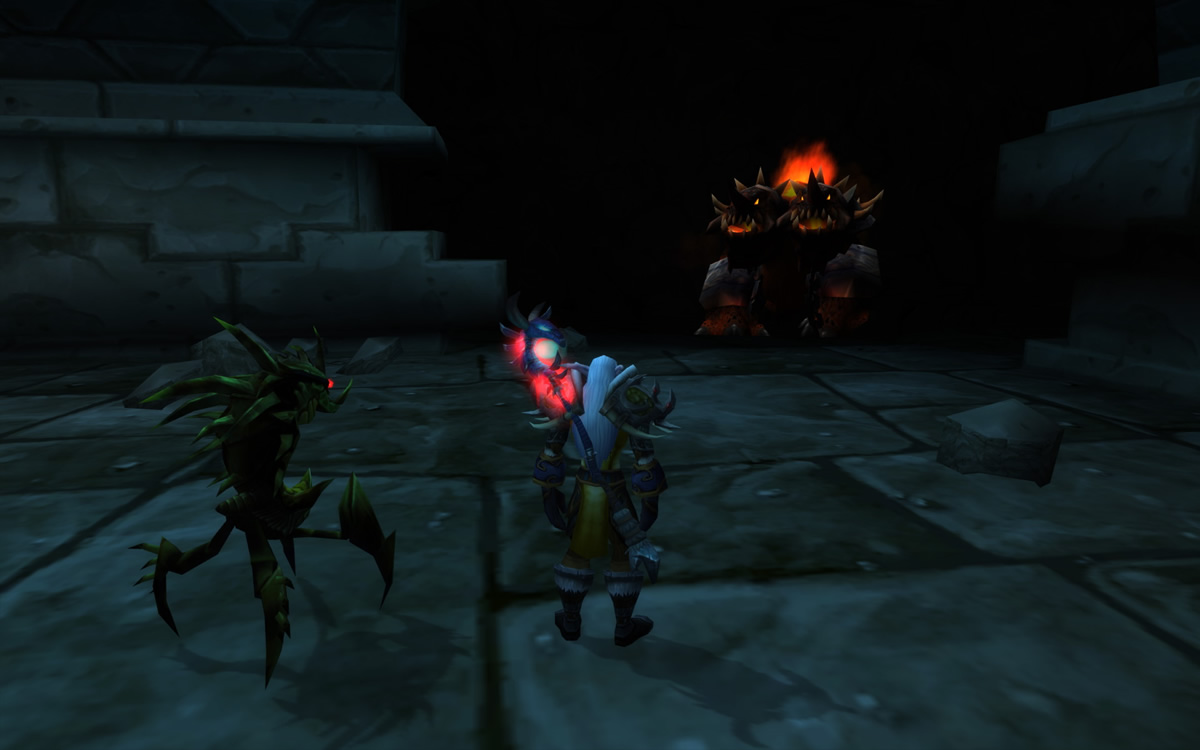 Taming The Beast from Upper Blackrock Spire is one of those huntery-type of achievements I’d been meaning to check off the list over the past few months. Last night I finally decided to tackle it.

Truth be told, it was really quite easy. Perhaps I was exceptionally lucky, but here’s how I did it…

First off, I grabbed any and all of my haste gear out of the bank, along with some Potions of Speed. Same as with attempting a King Krush solo-tame, you need to reduce the channeling time of Tame Beast to be as hasty as possible. The shorter the taming time, the greater the chance for success.

If you’re not level 80, then the haste becomes even more important, as the damage he deals will be more of an issue for undergeared players.

I basically equipped all PvP gear for the added stamina, apart from any PvE pieces that had haste on them. At the time of taming, I was at about 29K health.

You need to have a throw-away pet with you when you begin the taming. In order to pull off a successful tame, you need to be under the effects of The Beast Within so as to avoid The Beast’s interrupts.

The macro is pretty important, as it maximizes your taming time while under the effects of The Beast Within. With one button press this macro will:

Tame Beast Will not begin simultaneously, as it takes the game a split-second to realize your pet is gone. One quick second tap will get it going, however.

I didn’t put it in there, but adding Deterrence is a good idea too, especially if your hit points are a bit low (~20K or less).

Now it was off to Blackrock Spire…

Skip this section if you know where to find The Beast

I wasn’t much of a dungeoner prior to TBC, so this instance was still pretty unfamiliar to me. I’d ventured in there maybe all of three times back in vanilla; only one of those times being the UBRS portion.

To get into UBRS, you enter Blackrock Spire (via running up the chain opposite the direction of Blackrock Depths), then head up the stairs and to the left. You’ll enter a large hall lined with small side chambers – each one possessing a glowing rune on the floor. In order to gain access to UBRS, you need to fully clear the mobs surrounding these runes. Once you do, the door opposite the entrance will open.

Back in the day, Seal of Ascension was needed to unlock the upper portion of Blackrock Spire, but not no mo’. Now you can just slaughter your way in.

Once you get in there, you’ve got to blast your way through a few bosses in order to gain access to the Furnace, which is where The Beast is lurking. The upper portion of the instance is pretty small, so you can get to him pretty quickly. At level 80, none of the mobs present much of a challenge, so reaching The Beast is pretty smooth sailing.

If you still need your Leroy Jenkins achievement, this is a good time to knock that one out. The Rookery is just outside the chamber where the first boss is located (Pyroguard Emberseer).

Once you get past the Pyroguard, the Warchief & Gyth; it’s onto The Beast.

Tame The Beast in the corner, behind the hay

The only positioning strategy involved with taming this guy is to skooch yourself into the far corner on the left, just behind the pile of hay. Taming him from this location prevents his knockbacks, and apparently is also supposed to help against his fear. Regardless, it’s recommended, so that’s what I did. 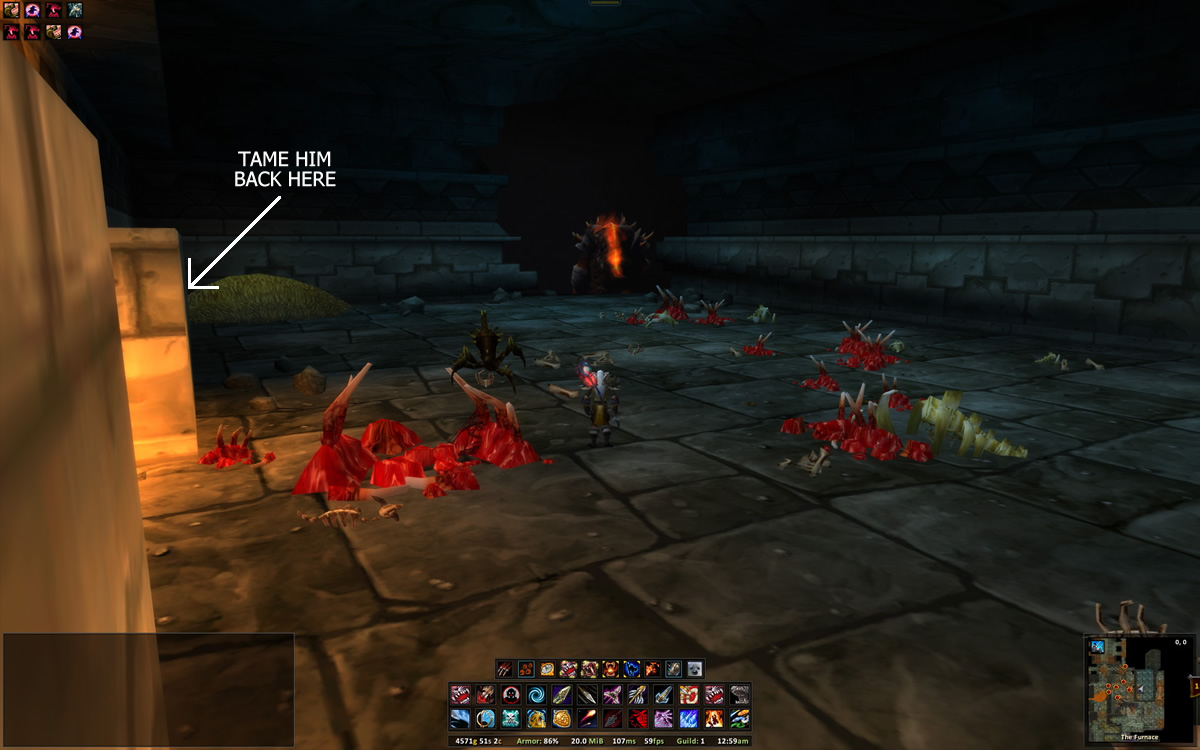 A lot of players suggest pulling him with Scorpid Sting, so as to reduce his hit chance. I didn’t bother with this, but used my pet to pull him instead. I targeted him, positioned myself behind the hay, then sent my pet in. Once he was within range, I hit my macro and began the tame.

My first attempt failed about 3/4 of the way through.

Some suggest having a few throw-away pets at your disposal, to allow for some failed attempts. Otherwise, you have to run back outside and tame another one real quick, which is just what I did. I had cleared most of the mobs on the way in, so I just booked out into the LBRS portion and tamed one of the Scarshield Worgs.

For my second attempt I let my pet beat on him for several seconds, allowing me to get a feel for when he’d cast his interrupts. Anyway, what ended up working for me is starting the tame immediately following one of his Fireball casts.

The second attempt was textbook.

During the taming, he took me down to about 50% health (starting at 29K) during a 14.5 second hasted cast time on Tame Beast.

Well, what’s so cool about The Beast..?

Well, for starters, Core Hounds are among the top Beast Mastery PvP pets, especially for arena. In Cataclysm, Core Hounds will also be an optimal pet for PvE, due to their new Ancient Hysteria buff (i.e., Heroism/Bloodlust).

Apart from The Beast, the only other Core Hounds that share his awesome red model are the ones found in Molten Core. What makes The Beast so special though, is that he still retains his ?? Boss status once tamed.

The Beast is a perfect compliment to the Core Hound Pup… or is it the other way around..? Either way, they look really cool together. 😉

Solo-taming The Beast is a fun challenge, especially for hunters who are not yet level 80. If you’re looking for something fun to try, or have a hankerin’ for pets that are a bit more unusual and unique (just as I do…), then why not go out and try to tame The Beast… 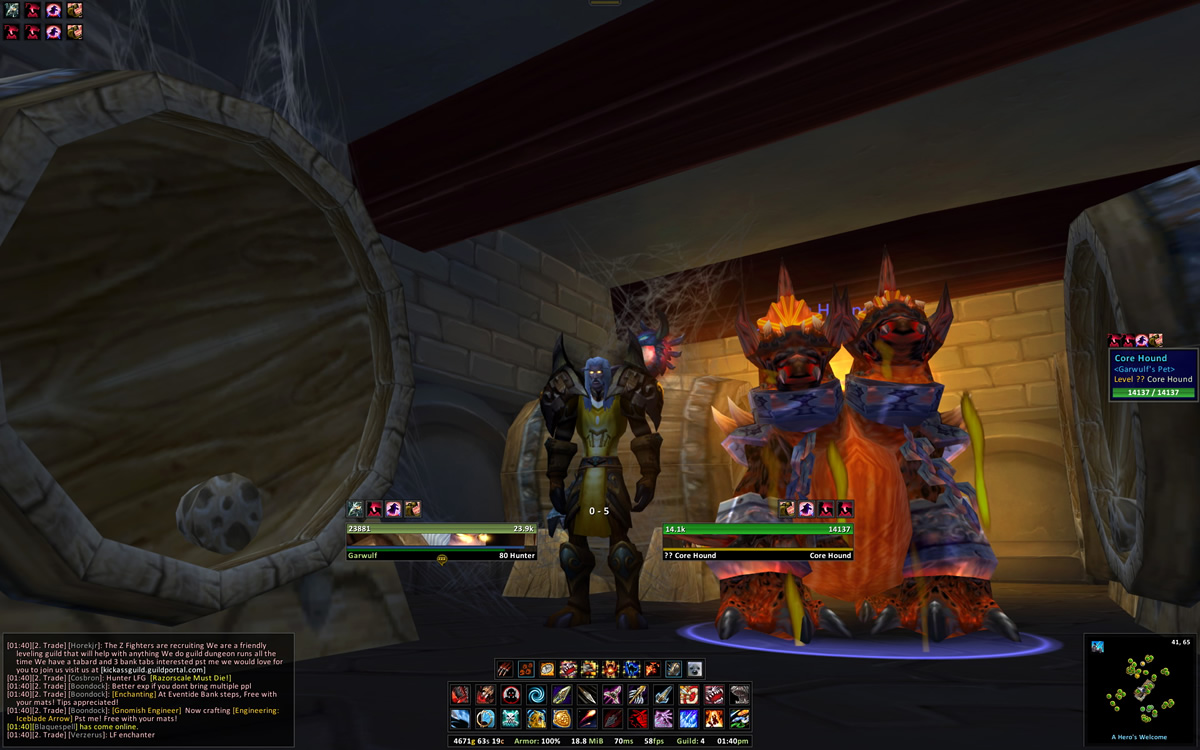 Last week I saw for the first time ever… another hunter with King Krush. Apart from mine, as a hunter pet, he only existed in screenshots as far as I was concerned. 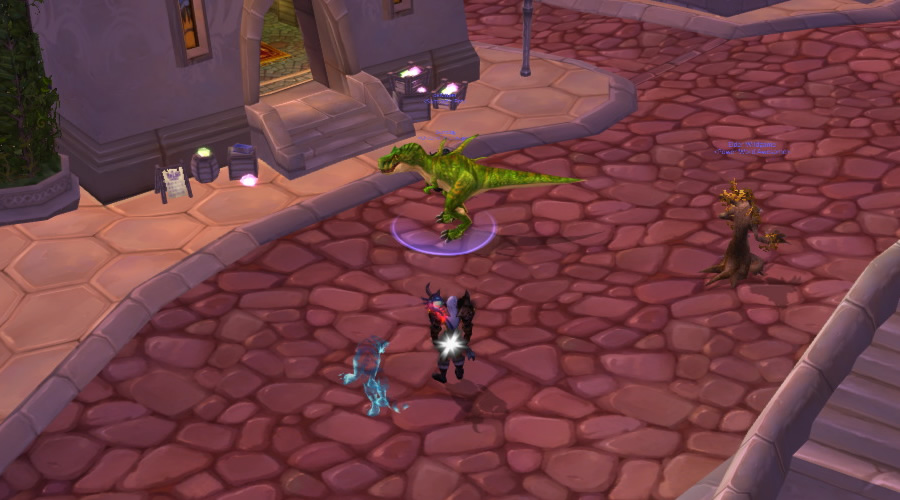 In the 16 months since I solo-tamed the big green Devilsaur, I have never seen him even in my battlegroup, let alone on my server. My jaw about hit the keyboard as I was trekking through Dalaran that day.

Is that… well, I’ll be… I never thought I’d see the day. Another hunter with King Krush… (I bet he had a Priest throw Fear Ward on him, and probably had a Shaman throw Heroism up… cheating bastard…) 😉

I gave the hunter a cheer emote, then went about my business. I had to admit… I was a little saddened. This Dwarf was stealing some of my thunder. 😕

On the other hand, here was a hunter after my own heart. Any hunter who would go through the trouble of obtaining the Krush is alright in my book. 🙂