Just have a look at these two gems. Beast Mastery Hunters rejoice!!!

Also, cat damage has been buffed…

Will this change dethrone the wolf as the top raiding pet in 3.2? Interesting…

Those were the biggies I noticed. In addition to those changes, they reduced the cooldown on Roar of Sacrifice to 1 minute, down from 2 minutes.

From a Beast Mastery PvPer’s perspective, I’m really excited about these changes. The added survivability and DPS our pets will gain is going to be most welcome.

These changes should also increase BM representation in raids. If the patch were to go live tomorrow, my Devilsaur would gain over 200 base AP. While that’s not a huge buff unto itelf, just imagine how well Animal Handler and Wild Hunt will scale with raid buffs and item procs. O.O BM pet damage should overtake the Hunter’s at this point. Now if we can only keep them alive…

Visit MMO Champion to see all of the Hunter changes in this latest build, as well as other patch notes.

Any other Hunters out there feel like they just got kicked in the stomach?

I had high expectations for Patch 3.2 and how it was going to positively address the needs of Hunters in both PvE and PvP. While a couple of the changes are a step in the right direction, I feel like the devs took a few more steps backwards with the class as a whole.

Actually, after reading about all of the upcoming love we were supposed to be receiving and then reading over these patch notes, I feel more like Ned Beatty’s character in Deliverance. The Blizz Devs being representative of them hill folk.

Let’s examine some of these changes to the Hunter class, shall we…

This change applies to all classes that use pets

40% resilience inheritance is a slap in the face. I have 808 resilience while decked out in my PvP gear. That means my pet will be receiving 323 resilience. While some resilience is better than none of course, you really need about 500-600 before you start noticing a difference in survivability. 800 resilience is about the highest any DPS class would want to go anyway, because eventually you start to sacrifice too much in the way of DPS.

If I were to be grouped with a healer, then I’d probably want to swap out some PvP pieces for higher DPS PvE gear, thus lowering my resilience to about 600. 240 resilience for my pet at this level is practically worthless. Also, what happened to all of this talk about pets inheriting crit %..?!

This needs to be more around 60%, or at the very least they need to offer BM Hunters a way to obtain more PvP survivability for their pets. Since they broke Animal Handler, that may be a good place to start. Pets could inherit 10% more resilience and maybe have a 2% reduced chance to be crit per level. So, 2/2 in AH would give them say… 20% more of the Hunter’s resilience, a 4% reduced chance to be crit along with extending the length of Master’s Call to 10 seconds. This way it would be a pure PvP talent. I hate how some of these talents have a use for one aspect of play but not for the other.

The way hit % is apportioned now is a good thing, but a fairly negligible change IMO. It looks as if the only players that will really benefit from it are leveling Hunters who have not yet been able to reach the desired hit cap. I don’t intend on going 7.89% just because my pet will receive 7.89% too. I’d rather not miss at all ever… how about you?

Pets being expertise capped is nice, but what will become of Animal Handler? Without the expertise portion of it, Animal Handler now gives you just 6 additional seconds of Master’s Call which is absolutely useless for anything outside of battlegrounds or arena. I’m thinking they’re not done with this yet, so I’m just going to sit tight and wait for future patch notes.

This will make leveling easier from 16-20. Woot..? If they weren’t lowering the Apprentice Riding Skill to level 20, then this would be a nice convenience buff for lower levels.

It does however add a bit of excitement for the 10-19 twink bracket though. But… does anyone twink 10-19 anymore..? Right, didn’t think so.

Ugh… why’d they have to do that.

This is the one change that is pretty cool. Well, for PvP at least. It’ll be nice to get a little added DPS in with a frost/fire or frost/snake combo. Plus it can buy us a little bit of extra time if the player chasing us tries to avoid the Immolation Trap by skirting around it.

Only thing I see sucking here is having to burn 2 GCDs to lay 2 different traps. I suppose if you were being LoS’d by a healer in Nagrand Arena you could drop a frost, along with some fire and snakes for a little extra DPS and interrupts.

However, it is nice that Black Arrow can now be used with Frost Traps in arena.

Yay. Another PvP/soloing talent linked with a DPS ability. I think a better use of this would be a 15/30 second reduction, and attach it to Animal Handler. Raiding BM Hunters are used to dumping two points in there ayway, so this would be like 6 of one, half a dozen of the other. Plus, it would make for a nice buff for BM PvP.

This one is frustrating. Being that it’s the only improvement for BM DPS so far, why have it linked to a tanking talent..??!! Is it really worth 3 whole talent points that deep into the tree?

Lame. The unlinked trap cooldowns would have made for a nice PvP buff had it not been for this ridiculousness.

Ouch. This is going to upset Survival Hunters. Why add a cooldown when the proc rate is so low to begin with?!

Wow. I thought the idea was to make Hunters more viable and better represented in arena? What the hell is this crap?! 2 minuted CD… you gotta be kidding me…

Please make this go away. It’s making my head hurt. 🙁

If you want to read about some of the more exciting and positive things being introduced with patch 3.2, including a new dungeon and battleground, head over to MMO Champion.

That’s wonderful news for the fortunate Hunters who managed to tame this incredibly rare pet before the hotfix. I was skimming over Mania’s post from today which contains a summary of hunter changes and highlights from patch 3.1, when I saw this…

I also know that there’s been a host of animation changes (ghost wolves can run now!).

I had my wolf out about ten days ago on the PTR and it was still bugged at that time. I don’t know if this is something in the official notes or not, but I can verify that it has been fixed. I logged on to the PTR and filmed a quick video of me frolicking about the Argent Stand in Zul’Drak.

This is pleasantly surprising news for me, because I had asked a GM about it at one point, and he said there were no plans whatsoever to fix it since it was never intended to be tamable.

In case you haven’t had the chance to copy over to the PTR and download the latest patch, I suggest you do it now. 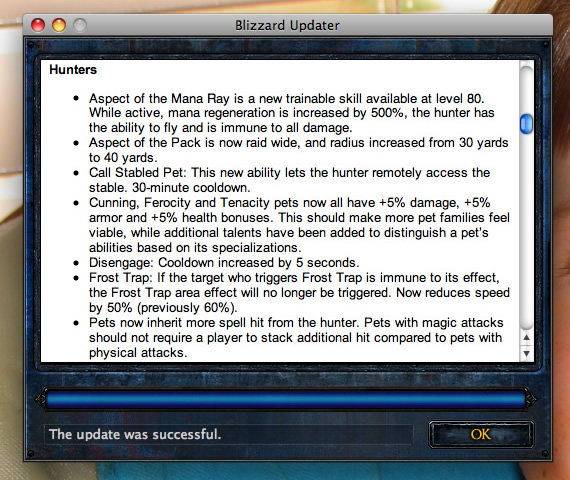 I went to log on to the PTR this morning and look for Gondria, only to discover Blizz released another huge content patch. It took forever to download, so I stepped away to start a pot of coffee.

When I returned to my desk, the patch was writing and the notes were up on my screen. I skimmed over the latest changes until I read this bit and about fell out of my chair.

Of course I’m thinking this is a joke, so I quickly log in to try and train this new aspect and see what kind of prank Blizz has pulled. What I discovered was incredible. I opened my spellbook in the off-chance it was already known. It was in there! I activated it and what happened next made my jaw hit the floor. 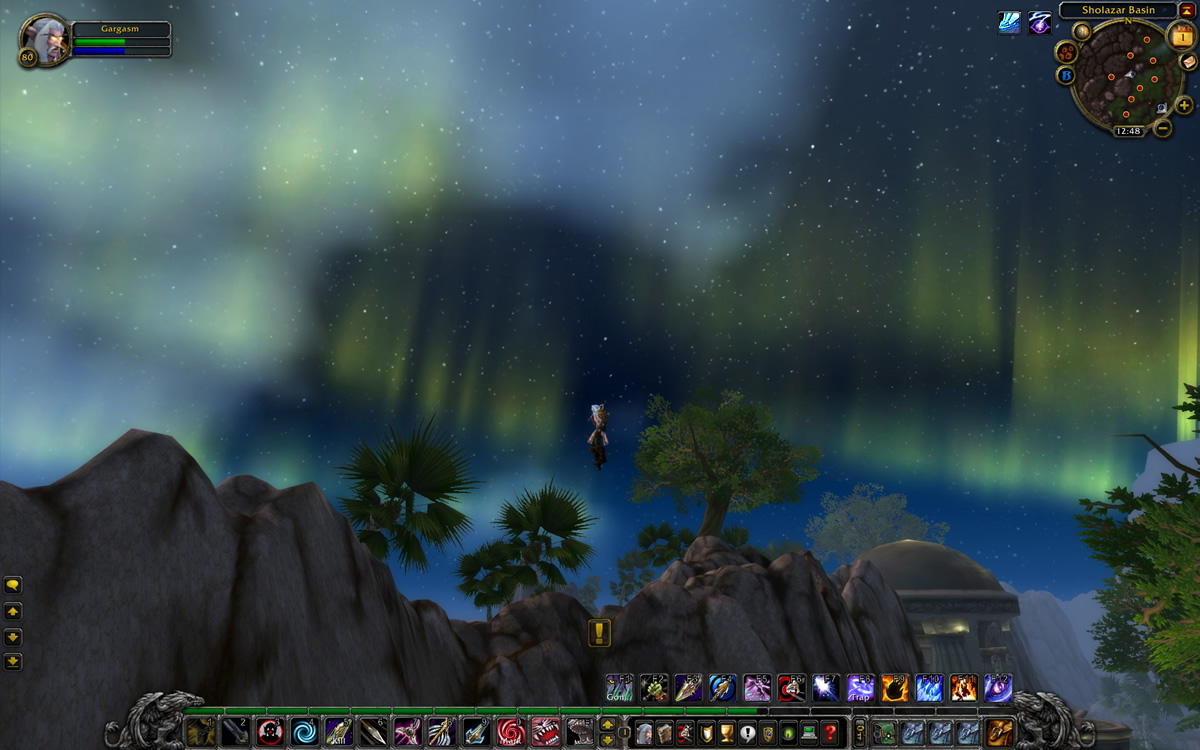 I had been logged out in Sholazar Basin, as I’ve also been trying to tame Aotona in addition to Gondria. I activated the aspect and what I witnessed was freaking amazing. I WAS FLYING!!!

I figured this had to be some silly joke the devs had planned, and that other classes probably had other similar skills. I went over to MMO Champion to see what some of the other level 80 goofs were. Then I see this!

Hunter (3.1 Skills List / 3.1 Talent + Glyph Calc.)
Aspect of the Mana Ray
We felt that Hunters were still lacking survivability in arena and battlegrounds. In addition to that, viable mana regen was continuing to be a problem, especially for BM and MM builds. Our solution to this was implementing Aspect of the Mana Ray, a skill that had been in the game code for quite some time, but had always been viewed as too overpowered to go live.

The activation of this new skill is going to require some thorough testing and will most assuredly delay the release of 3.1 until after Noblegarden has begun. While the goal was to address certain Hunter weaknesses, we want to make sure it’s not overly imabalanced before it goes live. We have yet to finalize certain details about the new aspect such as: will the hunter be able to cast harmful spells while it’s active, or be permitted to return flags in WSG while under its effect.

I’m still tripping out on this, but I can’t understand why Blizzard would go through so much trouble coding this if it’s a prank.

All I have right now is a screenshot, but as soon as I get a chance I’ll post the video. Right now, I’m off to play with this some more. It’s freaking incredible!!! Oh, how I hope it goes live. 😉 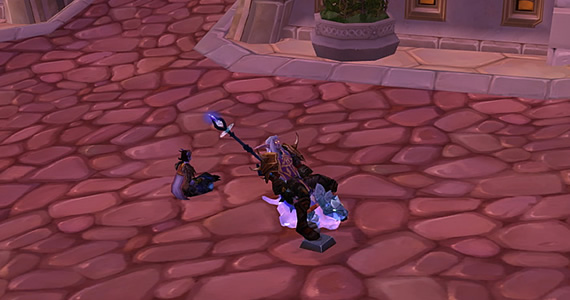 Sandbox Tiger on the PTR

After hearthing to Dalaran this morning, I was greeted by this unattended and inviting Sandbox Tiger sitting just outside of A Hero’s Welcome. Since this was the first time I’d seen one, I had to give it a go. Wheeeeeeeeeeeeeeeeeee!!!! In other words, I’ll be back later with a real post once I have some time. 😉