A whole laundry list of updates was posted earlier this evening over at MMO Champion. Among the barrage of recent patch notes are some pretty significant changes to secondary professions, and the ways that we level them. Before we get to that though, let’s start off with the most important updates… Hunter changes.

Alright, so most of those changes we already knew about. Some of the talents and glyphs have been tweaked slightly, but no ground-breaking changes for the most part. Also, I logged onto the PTR tonight and it seems that the new Glyph of Mend Pet is indeed a major glyph. It’s still pretty awesome, but it’d be difficult to give up a major glyph slot for that one over something else.

The racial changes are somewhat huge. Draenei got buffed and Dwarves got hosed is the way I see it.

A few of the following updates are what some consider to be the “dumbing down of WoW”. The removal of quest chains for dungeon attunement, or for unlocking or training certain skills is what I’m referring to. Well, at least they’re making these profession quests optional and provide a decent reward. Coincidentally, my 63 Death Knight was just about to embark on his journey to Tanaris for Artisan Cooking.

I’m sure some people would passionately disagree with my view on this, but I really enjoyed the lore that went along with these semi-epic quests. The cooking one is probably my least favorite, but I really enjoyed the odyssey Nat Pagle sent me on in order to further my fishing expertise. Maybe I’m different than a lot of players, but I see the journey as being half the fun. These days it seems like everyone is in such a bloody hurry, but for what..?

When they made the Druid’s Aquatic form trainable, that made me sad in the pants. To me, that was one of the all-time memorable quests. Having Swift Flight Form be trainable is also pretty weak. Luckily they haven’t yet decided to auto-assign pets to Hunters at level 10 and let Tame Beast be available for a few silver. :-\

I’m sure Blizzard has a method to their madness. WoW won’t be around forever, and I know they want more and more players to be able to enjoy the end-game content much sooner than used to be expected. I also know that many players who have already completed those quests will appreciate not having to do them again on their alts, but I can’t help but feel like some of the newcomers will be missing something.

Well, I could go on about this for days, but I’ll hop off of my soapbox for the time being. On to the updates:

That new mount is going to get me fishing again no doubt. I’m also jazzed about the fishing dailies. It’s not that I hate fishing, but it’s pretty low on my list of in-game priorities. When the daily was introduced in Outland, it made leveling the skill very attractive.

So there ya have it… just about everything profession-wise, with the exception of the new recipe drops in Ulduar, is going to be trainable.

The following changes, while not that significant to most players, are going to shake up the twink community a little. I for one hope they nerf the twinking exploits big-time. I prefer a more level playing field myself. Removing the gathering profession cap ruined low level PvP for a lot of players. These changes should bring some balance back to low level BGs.

This latest update was huge, and I only listed a fraction of the changes. I’m also going to wrap up this post and pass out in about 10 seconds due to sleep depravation caused by a 21 month old son, so if you want to see more of what’s in store for 3.1, go to MMO Champion.

More changes to the Hunter class posted by the nice folks over at MMO Champion:

1 min CD on Wyvern Sting will be pretty sweet if arena matches start lasting beyond 45 seconds. Oh well… I guess that’s what I get for not running with a healer. Seriously though, a minute cooldown on that shot is going to rock for SV.

Marksman is getting some love with these changes. Concussive Barrage will be a must-have talent for PvP. While subtle, the change to Efficiency is nice. 5% extra Mana pool is nothing to sneeze at.

But… the greatest gift of all is…

Glyph of Mend Pet: Increases the healing done by your Mend Pet ability by 40%.

That is incredible… Thank you Blizzard!!! This is an absolute godsend for BM Hunters. This Glyph along with all of the other synergies in the Tenacity tree is going to be insane. It’s going to do so much for pet survivability I get warm fuzzies just thinking about it. The only thing is… will it still be a minor? Probably not. 🙁 That’d be too good to be true.

Some of the other changes are a bit meh, and Glyph of Raptor Strike looks like a waste at this point. It may prove useful for low level twinking, but that’s about it.

Anyway, there’s tons more 3.1 goodness to read about over at MMO Champion. I just wanted to post some of the Hunter-specific information and keep my peeps informed. 😀 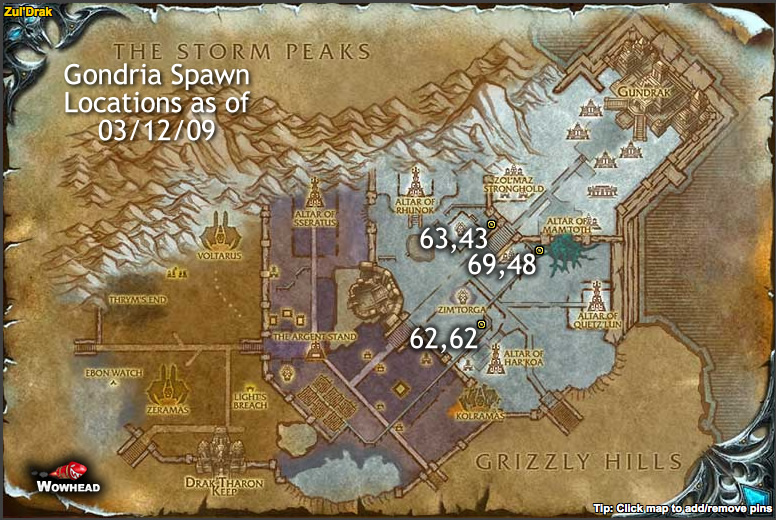 As I’d stated earlier, I was hoping there would be multiple spawn locations for Gondria, and indeed there are. This map I created shows the most recent locations where the Spirit Beast was found (I rounded off the coordinates).

If you haven’t seen BRK’s video on it, you should check it out. Gondria is definitely more flattering when viewed live. I like the whispy vapor mist it has. Still not enough to make me ditch Loque though. 😉

This thread is another good place to check for updated info. There’s some Hunter jibber-jabber, as well as more screenshots.

Good luck people. See you on the PTR. 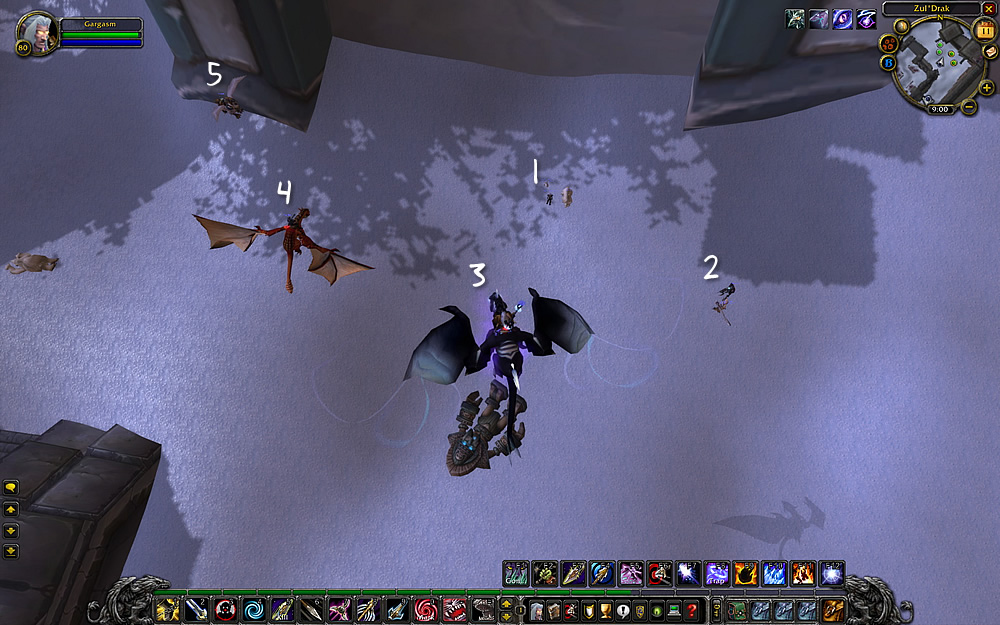 As indicated by this screenshot I took earlier today, I think news of this Gondria creature has spread across the internets. Just a hunch. I suppose they could all be after Icepaw Bears… you never know. /shrug

I figure if I can tame Gondria before the patch goes live, it will supress my urges later on. I plan on keeping Loque’nahak, but the thrill of seeking out and taming yet another rare exotic Spirit Beast is so compelling. I’m liable to find myself in a compromised state one evening, have a lapse in judgement, and abandon one of my current pets to go after this new beauty. However, if I can tame Gondria in the “not for reals” World of Warcraft, I feel as if I could exorcise those urges.

On a side note, while hovering around the area hoping for a Spirit Beast sighting, I sicked my ape on some of those golems. I specced him pretty tankaliciously with 2/2 Silverback and 2/2 Wild Hunt. With no heals, he was destroying those 77 Elites and sitting at full health when finished. The new pet talents are incredible. 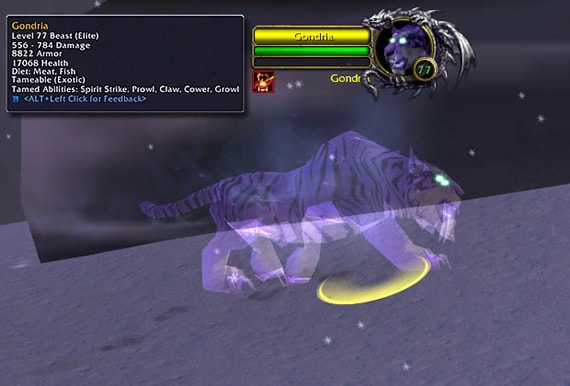 I just peeped this on MMO Champion. There’s another rare exotic Spirit Beast in the game that is prowling around in Zul’Drak on the Patch 3.1 PTR.

Gondria is a new level 77 Spirit Beast with all of the same skills as Loque’nahak. The mob is also neutral, so it will not attack until you try taming it. The skin is like King Bangalash with glowy eyes. Gondria is also semi-transparent when not prowling, just like the Ghost Sabers.

In my opinion, the skin is not quite as attractive as Loque’nahak’s. However, it’s going to offer BM Hunters a choice, as well as cutting down on the competition for Loque. I like this addition, and I think it would be exciting if more Spirit Beasts started popping up in future patches. They’d all have to be rare and possess one-of-a-kind skins though.

Imagine a black lion skin like Humar’s, but with glowing red eyes and mouth… 😀 No, wait a minute… a black tiger skin with red stripes! Also, the stripes would begin to glow near the head much like Loque’s markings. Oh… and the Spirit Strike would shoot from its eyes like laser beams! …and the… err… nevermind. I’ll stop now. 😉 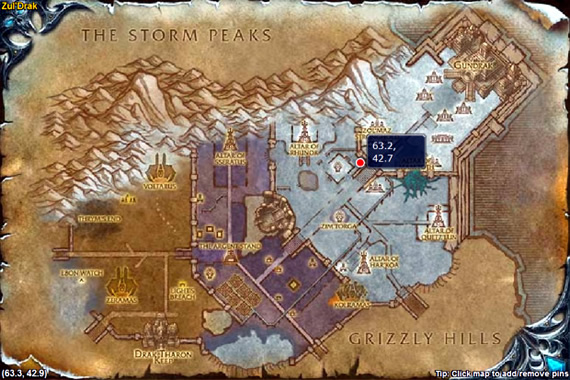 Thanks to Dailalaa for sharing this information, including the wonderful screenshots from the PTR.

Update: BRK just tamed this beastie, so look out for the video. I’m sure he’ll have it up shortly.