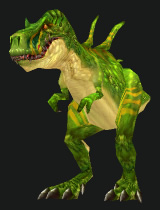 At any rate, the pet I want to talk about this evening is King Krush. For those of you who don’t know who King Krush is, well… he’s a rare green Devilsaur who lurks in Sholazar Basin. He’s been a prized trophy sought by hunters due to his unique skin, along with the sense of accomplishment that a hunter can derive from successfully solo-taming him.

The thing that makes Krush so special, apart from him being the only green Devilsaur in the game, is that he represents one of the more difficult taming accomplishments in the game. At one time, Krush was arguably the most difficult solo-tame in WoW.

Since 4.0, taming him is not quite the feat that it used to be, but it still requires some planning nonetheless.

Oh yea… so what is so tough about getting him anyway..? Well, I’ll tell ya…

Although he’s only level 75, he hits very hard. Krush is a Rare Elite mob, which means he can dish out some pain. Nowadays we have larger health pools, so that’s not a huge concern, but still something to be mindful of.

Next, and more importantly, he casts a fear which can break your taming process. He also has a knockback ability which can do the same.

Lastly, he’s immune to all forms of crowd control. You cannot freeze him or slow him down – – he cannot be stopped..! AAAaahhh… Fear the Krush. 😉

The trick to solo-taming this prized reptile is to reduce the casting time on Tame Beast, so that he has little time to cast his interrupts during the taming process.

Provided you’re lucky enough to find him (here are the spots where he hangs out), here’s how you can ready yourself for a successful solo-tame…

1. Buff yourself with some haste food and an Elixir of Lightning Speed. Also, you’re going to want to bring a couple Potions of Speed along to make you even more hasty. Equip any and all of the gear you have with haste on it, and also be sure to bring with you an on-use haste trinket if you have one. Platinum Disks of Swiftness is relatively easy to obtain and does the job nicely.

2. Take a Core Hound with you while you’re out looking for him. Core Hounds have the new Ancient Hysteria buff, which will allow you to shave some precious time off of the Tame Beast cast time. Just as you encounter Krush.

Update: I had previously mentioned bringing a trash Core Hound with you, then casting the buff and abandoning with a macro. This is not necessary as indicated by Kazador’s comment below. Just cast the buff, then dismiss your Core Hound. This is a much better plan since it saves time if you already have one in your stable, plus it eliminates possible accidents later. 😉 Thanks for the update Kaz.

Just before you begin the tame, press this macro:

/use Potion of Speed
/use 13
/cast Deterrence
/cast Tame Beast

/use 13 represents your on-use haste macro – just make sure it’s equipped in your top trinket slot. If you don’t have one, then just omit that line.

Combined with the haste on your gear, along with the food and elixir buffs, these stacking haste buffs should get the tame to complete just as Deterrence wears off. Keep in mind that although Deterrence should block his fear, he’ll still be giving you a beat-down in the process. Deterrence is somehow glitched right now while channeling Tame Beast, and will not parry incoming damage.

So there ya go… for those of you still on the hunt for the big ol’ green machine, hopefully this post will help you in your endeavor.

I would like to thank long-time reader Kazador for inspiring this article. He sent me a note indicating how he pulled off a successful solo-tame using very similar methods. Kazador even included his Corroded Skeleton Key in the macro to further mitigate damage. Kazador referred to it as his “Invincible Tame”.