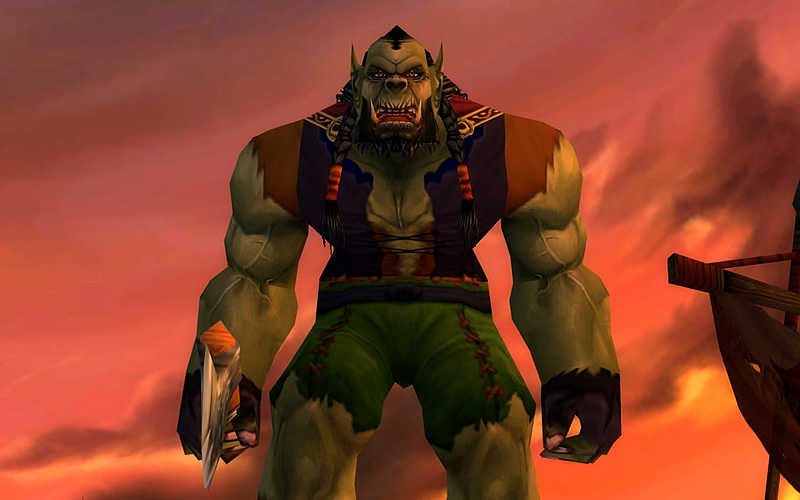 Guess who this is..?

It’s my first ever Horde alt.

I’ve often flirted with the idea of rolling a Horde character, but with so much time invested in the Alliance side of things, I’d always talked myself out of it. Well this time I’m doing it. The cinematic preview of Cataclysm at BlizzCon 2009 made me think I’d better get on it if I ever want to experience the Horde side of things, at least before everything’s tampered with.

I made an Orc Hunter because, well… I’ve wanted one for a long, long time. Rogue was actually my first choice for an alt, but that’s what my Worgen’s going to be. I have a Death Knight and Druid that are maybe half a dozen dings from 80, and beyond that the only other classes that really interest me are Warrior and Paladin. I have a 41 Human Warrior that I’ll level one day… maybe, and I wasn’t really thrilled at the notion of a BE Pally.

I kicked around the idea of making an Orc Shaman, but that nah… this may be my only Horde toon so I’m going to do what I want.

Orc racials are perfect for Beast Mastery. Command and Blood Fury (322 AP at level 80) are just too good. I like their bow animation too. It’s maybe not quite as cool as the Troll’s, but it’s still pretty sweet.

I created him on a PvP realm because I’ve always wanted to experience leveling and game play on a PvP server. So far I haven’t encountered any hostiles, but only friendly players. In fact, I already made a buddy. 😀 I grouped with a Shaman so that we could help each other collect Intact Makrura Eyes, Crawler Mucus, Durotar Tiger Fur, kill Zalazane and his evil minions, and foil the Kolkar assault on the Horde. When my new Shaman buddy found out that my character was a lone reroll on a new server, he promptly sported me 10G. I thought that was pretty cool. You Horde folk are actually a pretty nice lot. 😉

One thing that has me giddy about playing this new toon is the fact that I’ll have 5 more stable slots! I don’t really intend to power through the levels on this guy, but if I do ever hit at 80 at some point you can bet I’ll be going after Skoll. That’s a long way off though, so for starters I think I’ll go with one pet I’ve not tamed before… at least, I don’t think I have. That would be Mazzranache. What better pet than a pink flamingo for a fledgling Orc Hunter..?

So far I’ve had a blast playing this toon. I’m only eight levels in, but it’s been fun seeing things from the other side. I look forward to experiencing more Horde lore, and most of all, encountering my Alliance brethren on the field of battle once I hit 80. Mwahahahahahaha… *orcish laugh* I rolled on a PvP server within my battlegroup thinking that maybe I’ll encounter a few Kul Tiras familiars now and again.

By the way, is it just me or does it sound as if Christian Bale did his Batman voice for the Orc male emotes..?