On my server Halaa wasn’t exactly a hotbed of activity back in TBC, but the battles that did occur there from time to time were incredibly fun. I recall one battle in which there were 2 raid groups formed on each side of horde and alliance, which lasted for over an hour. It was during this battle that I earned the necessary tokens for my Dark War Talbuk, which is still among my 5 favorite ground mounts. This mount was not easy to get back then, so I would imagine it’s near-impossible to obtain now.

This was also a great era for Beast Mastery hunters, as we were incredibly powerful during this period. BM DPS was crazy, plus we still had the 18 second CC immunity from TBW. I was raiding and doing arena in those days as well, which had me very well geared. It was quite fun to blow stuff up in an epic PvP raid setting.

Those fierce battles over Halaa back in The Burning Crusade were among my most memorable WoW moments. I can only hope that something similar will be introduced in Warlords of Draenor. 😉 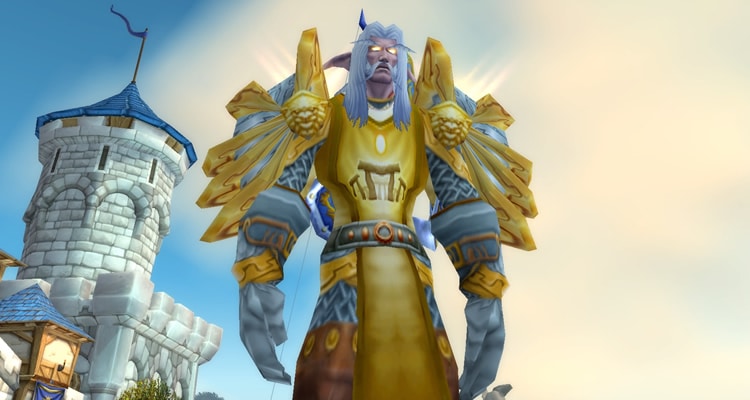 Of all my pieces of in-game attire, the one I cherish most is my Arathor Battle Tabard. Way, way back when I first discovered the Arathi Basin rep rewards I had desired this tabard, but due to the work that goes into acquiring it, I really wasn’t counting on me ever getting my hunter paws on it.

Those of you who collect tabards know that there are a few which require some effort to obtain. The Arathor Battle Tabard requires some work, and I mean WORK.

In order to have the right to don the Arathi Basin tabard, you must be exalted with the League of Arathor (or Defilers, for the Horde equivalent). You earn reputation by controlling resources during the game. I don’t know exactly what the formula for AB rep gains is these days, but I know it is a long, long road to exalted, and will require you to slog through several hundred AB games to reach exalted.

Then, once you reach exalted status, the League still doesn’t think you’re good enough to wear their tabard. You must prove your worth by reaching the peak of exalted status – 999/1000. Of course, this is a small milestone to achieve compared to what you went through to reach exalted reputation, but still…

Once you achieve the highest level of exalted reputation possible, you still have to prove your merit by obtaining this quest: Control Five Bases. If you make it this far it’s only a matter of time before you get a 5 cap, but it is in exercise in patience. This last step could take 1 game or it could take 30 games. An Arathi Basin 5 cap can be pretty tough unless you’re part of a quality pre-made.

Reputation gains with either the League of Arathor or Defilers are very slow going. There is no quick way to do it unless you regularly queue with an organized group that can sweep through and 5 cap every single time. For me, this was not the case. All of my BG achievements have been accomplished in PuGs. Apart from my days of competitive 10-19 WSG, I’ve never been involved in scheduled BG premades, which made earning things like Knight of Arathor that much sweeter. Achievements like this were not easy, and took a long, long time. 😉

This is the best looking tabard in my closet and looks amazing when worn over my vanilla Field Marshal transmog set. Earning it was a most memorable WoW moment for this Hunter! 😀

Back in TBC, when Lightning Breath was a non-armor-mitigated, nature based attack with zero cooldown, Wind Serpents were the hotness. With 2 in points in Go for the Throat and a decent amount of crit, your trusty Wind Serpent would be chain casting that attack. Wind Serpents were very raid friendly, because for fights where you needed to pull your pet out of harm’s way, you could park the Wind Serpent by your side with LB on a macro, allowing your pet to still cast safely from range without fear of getting stomped.

In PvP they were awesome because they had a ranged attack which ignored armor. While under Bestial Wrath, my Wind Serpent was capable of delivering some monstrous crits which worked out fabulously when facing plate-wearing classes. I loved my Wind Serpent and toted him everywhere.

Now, backing up to the moment when I realized I had to have one of these elite pets…

Since we only had a handful of available stable slots in those days, with one slot always needing to be available for taming new pets to learn their abilities, a new pet decision was a big one, for me anyway. I was very specific in determining which pets I would add to my stable, and in this case, I decided I must have Arash-ethis. No other Wind Serpent would do.

Out of all the Wind Serpent models, the white one appealed to me the most. Of the white wind serpents, there were only 2 that did not have “casters stats”. For those of you going, huh..?, back then pets were not standardized and many of them had advantages and some even had disadvantages. Wind Serpents were one of the pet classes that suffered from what were known as caster stats, where the pet would have higher than normal numbers for useless pet stats such as Int and Spirit, yet have lower than normal armor, health and attack power. If you didn’t know about this and picked the wrong wind serpent, you’d have a squishy pet with miserable DPS.

Arash-ethis and Hayoc were the only 2 white wind serpents in the game with normal stats. Arash-ethis was 12 levels higher than Hayoc, making the choice of which of them to tame an easy one.

Remember when we actually had to level our pets..? Honestly, it didn’t bother me too much to have to do that, but back in vanilla it could be quite a grind. If you had to tame a new pet, the closer it was to your level the better.

Once I determined which pet I was going to add to my stable, it was off to Feralas to do some camping. I’d all but completely skipped Feralas on my trip to 60, so getting familiar with that zone was also a memorable WoW experience. It’s definitely a neat zone when you’re first experiencing it, and back in those days Rexxar and his bear used to travel the path leading to and from Desolace, which was kind of cool seeing as a young huntlet. I wasn’t much into lore back then, but I always thought, now that’s one NPC that looks like a complete badass.

Anyway…I camped Arash-ethis for a few days, but no luck. He was a pretty rare spawn who only popped a couple of times per day, but what I didn’t know is that he was bugged, and still is apparently. Arash-ethis will spawn and travel underground, so unless you have an addon like NPCScan (which didn’t even exist then) or use a targeting macro, he can pass right by you undetected. This is especially odd since they moved his patrol area to another part of the zone, just NW of where he used to spawn.

What made this a memorable moment for me was the fact that I ended up using this pet for nearly 3 years afterward. Trogdor was my signature pet during vanilla’s twilight and throughout all of TBC. We had some good times. :*)

I’ve had my fair share of gut-wrenching wipes at 1 or 2%, nearly always in 25 man raids. Those are rough, especially when you’ve been chipping away at a tough boss, gradually getting closer and closer to success, only to wipe with just a sliver of their health remaining. Those wipes are very frustrating, especially when they occur on the last run of the night.

Rewind to about 5 years ago. I joined a 25 man PuG made up of mostly random late-night players from my server, including a Mage friend of mine, who I think was the only other player I knew in the raid.

The objective: Heroic: Twilight Assist, which meant downing Sartharion with one Drake still up in heroic mode, 25 man.

This was a fairly difficult achievement for a PuG back in those days, but we had a pretty decent group.

While not a particularly stand-out type of raid or achievement (by today’s standards)…the reason this raid was so memorable to me was due to the finish. It was the only time during my 8 years of playing that one of those raid wipe <1% finishes actually went my way.

During what was likely the last flame wave before the enrage timer, the wave took out the majority of the remaining players – leaving only about a half-dozen with Sartharion sitting at about 175K, meaning we were oh so close.

One after another, Sartharion starts nuking the remaining players. It started shaping up to be one of the most epic close-call wipes in history, with Sartharion down to somewhere around 20K.

Eventually the entire raid had been burned to a crisp, with only my mage friend still standing, when he pulled off the impossible by soloing Sartharion’s last few remaining bits of health in H 25 man. It was truly epic.

I’ve never been a part of anything like that since. Going from what looked like one of the closest attempts of all time, to a startling against-all-odds surprise victory, made my Heroic: Twilight Assist achievement from 2009 a treasured and memorable WoW moment.

See the original post here, along with the epic screenshot. My corpse can be seen just to the right of Sartharion, with King Krush laid out next to me.

MMO-Champion has some new information posted about WoD, along with a few video previews. If you’re anxious for some reveals about the upcoming expansion, then you should definitely head over and check out the full article.

In this video you’ll get a quick look at a few of the new character models (mostly the orc, which looks fantastic!) and see a few of the UI updates, including the new map World/Zone toggle feature. You can also get a glimpse of the pre-Dark Portal Shadowmoon Valley back before the evil fel magics ravaged the land.

But most important of all…at 5:10 there is a sneak peek at a new wolf / worg model. Enjoy!