I’ve had my fair share of gut-wrenching wipes at 1 or 2%, nearly always in 25 man raids. Those are rough, especially when you’ve been chipping away at a tough boss, gradually getting closer and closer to success, only to wipe with just a sliver of their health remaining. Those wipes are very frustrating, especially when they occur on the last run of the night.

Rewind to about 5 years ago. I joined a 25 man PuG made up of mostly random late-night players from my server, including a Mage friend of mine, who I think was the only other player I knew in the raid.

The objective: Heroic: Twilight Assist, which meant downing Sartharion with one Drake still up in heroic mode, 25 man.

This was a fairly difficult achievement for a PuG back in those days, but we had a pretty decent group.

While not a particularly stand-out type of raid or achievement (by today’s standards)…the reason this raid was so memorable to me was due to the finish. It was the only time during my 8 years of playing that one of those raid wipe <1% finishes actually went my way.

During what was likely the last flame wave before the enrage timer, the wave took out the majority of the remaining players – leaving only about a half-dozen with Sartharion sitting at about 175K, meaning we were oh so close.

One after another, Sartharion starts nuking the remaining players. It started shaping up to be one of the most epic close-call wipes in history, with Sartharion down to somewhere around 20K.

Eventually the entire raid had been burned to a crisp, with only my mage friend still standing, when he pulled off the impossible by soloing Sartharion’s last few remaining bits of health in H 25 man. It was truly epic.

I’ve never been a part of anything like that since. Going from what looked like one of the closest attempts of all time, to a startling against-all-odds surprise victory, made my Heroic: Twilight Assist achievement from 2009 a treasured and memorable WoW moment.

See the original post here, along with the epic screenshot. My corpse can be seen just to the right of Sartharion, with King Krush laid out next to me. 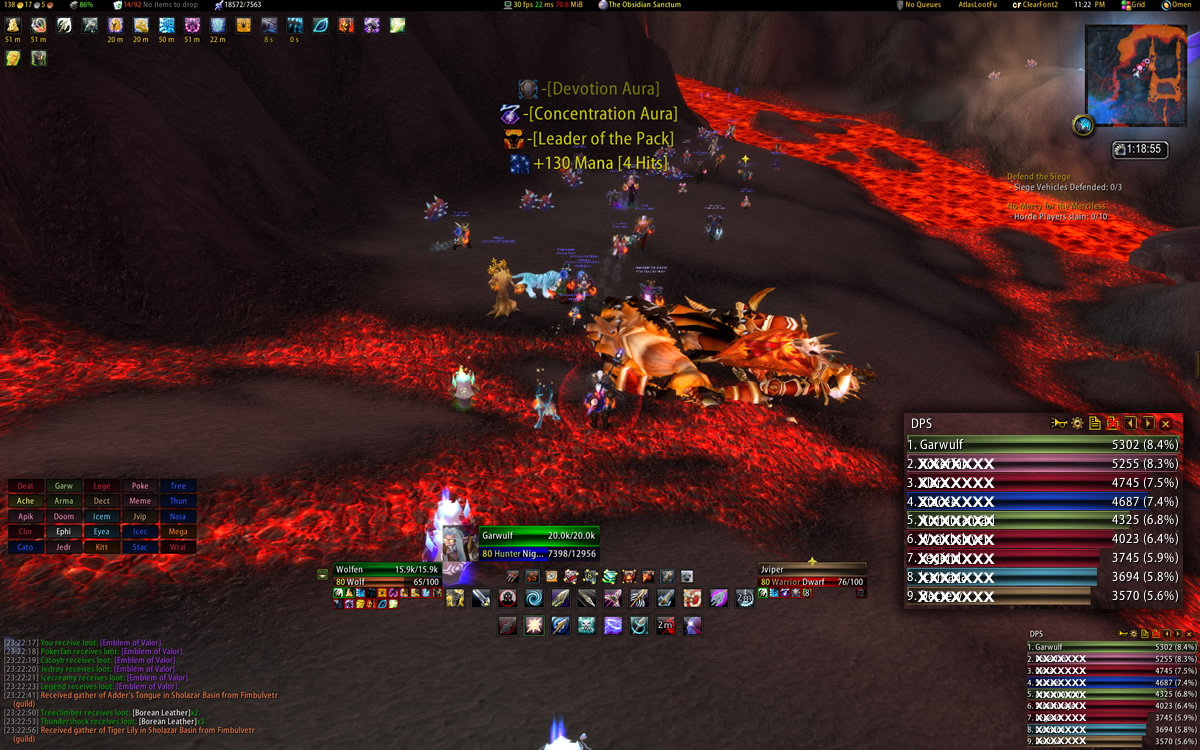 Shortly before the server restart tonight I set a new personal best for DPS. 5302DPS for Tenebron in Heroic Obsidian Sanctum. Not too bad for a slacker Marksman Hunter.

I shifted a few talent points around earlier tonight, swapped out a glyph, and managed some decent upgrades this week, which I think helped considerably.

While browsing the auction house earlier tonight, I recalled I still hadn’t gotten a Glyph of Chimera Shot yet. Finally I found some up there for a realistic price, so I nabbed one. As a placeholder, I had a Glyph of Trueshot Aura. My crit is already insanely high, so that glyph probably wasn’t doing a lot for me. Anyway, while re-glyphing I decided to re-visit my spec and see if I could improve upon some things.

I’m always looking for ways to improve my specs, whether it be for PvE or PvP. After reading comments from some of my readers, and doing some critical thinking of my own, I elected to go for Aspect Mastery. Initially, I had tried an 11/53/7 build when I purchased my dual spec. At the time, I wasn’t too crazy about it, and ended up going SV, BM, and eventually settling on a 7/57/7 MM build for raiding.

This build was great, and perhaps it was more so me getting the hang of playing MM, but my DPS shot up considerably. Now, after having raided as Marks for a few weeks, I’m fine-tuning things some.

I’m not a spreadsheet kind of guy, but I do try and analyze things carefully to see where I feel I’d receive the most benefits. I’ve decided to pick up Aspect Mastery again because it just makes sense. My reluctance before stemmed from me not wanting to spend 3 points in non-dps talents in order to obtain it. I felt I could get more value from using all four of the points in the MM tree, and spending all of them on DPS talents.

The points I elected to pull from the MM tree were 3 from Improved Barrage and 1 from Silencing Shot. Many of you will read that and say, well yeah… why the hell didn’t you do that before..?!

For starters, I liked having the additional crit for Multi and Aimed for both trash pulls and long boss fights. Silencing Shot was difficult for me to bypass, solely because it’s hard for me to accept being a MM Hunter without it. Yet, in reality, this is PvE we’re talking about, so not that important a talent.

Giving up 3/3 in Improved Barrage was an easy choice for me now. My crit is now at an insane 33% unbuffed, so I wasn’t seeing much benefit from it really. A few weeks ago it may have made a little difference, but not so much now.

Silencing Shot I had macro’d in with my Steady Shot for a little added burst. I never used it on its own, so I doubt I’ll even miss it.

This was my first real outing with this spec, so I won’t really get a good idea of the gains until I raid a bit more. However, I suspect with this new build and my host of upgrades, I may be a new regular member of the 5k club. 😀

More on these so-called upgrades later… 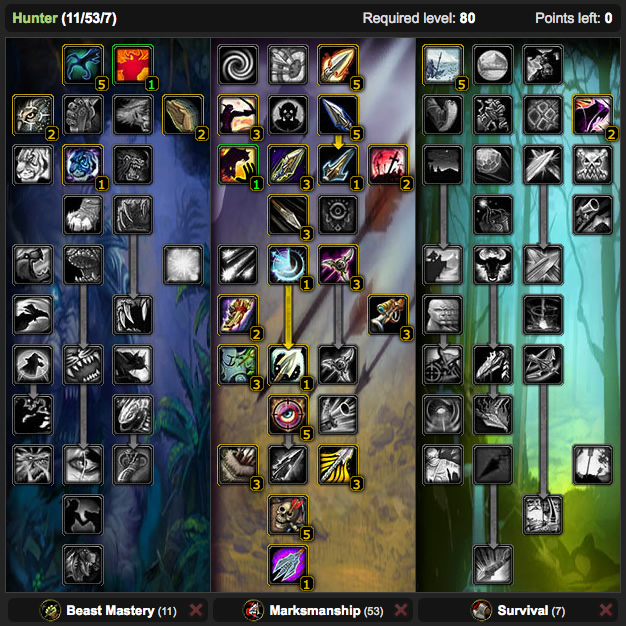 How’s this for an edge of your seat, nail-biter of a finish. This screenshot is from a 25 Man Sartharion 1D PuG I was in on last night. 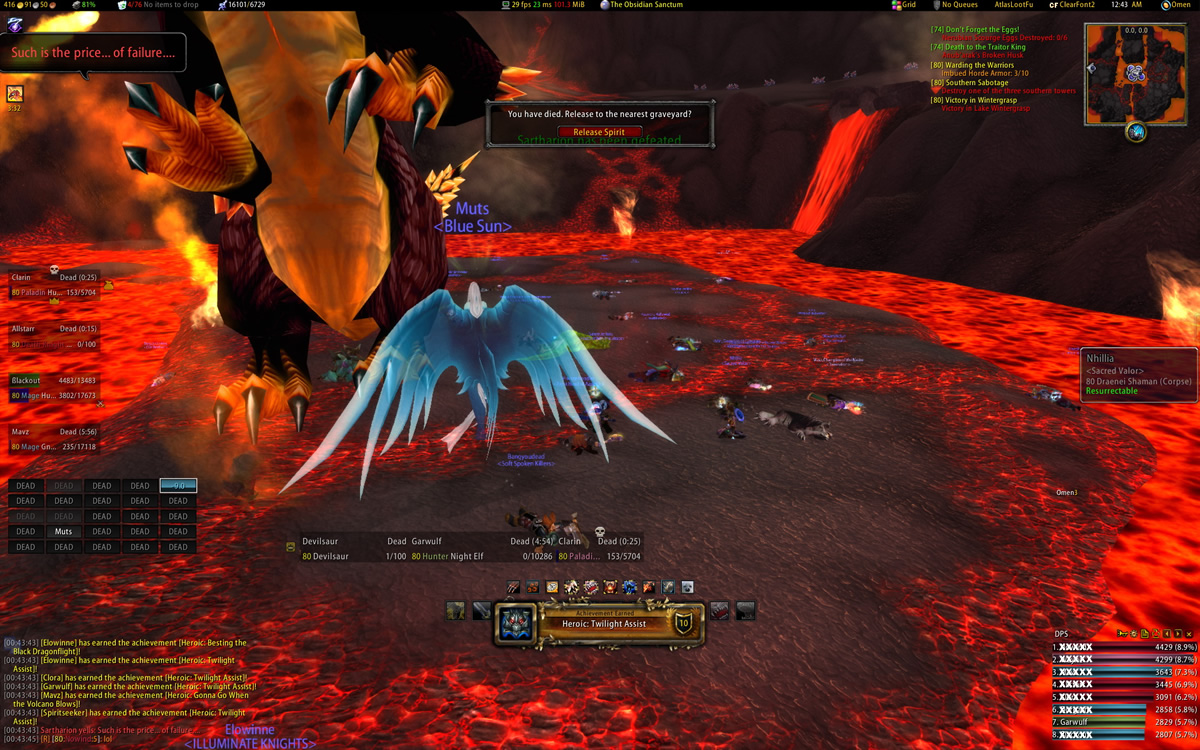 The last Flame Wave took out a good portion of the raid, freeing the adds and dropping the MT. I watched in horror as Sartharion started one-shotting the six or so that were left, while only at about 175K.

Blackout should have gotten a “Last Man Standing” Achievement.

Now, let’s talk about how this fight sucks as a Hunter. I hate this fight, did I mention that?

I’ve never really taken the time to learn this encounter, so shame on me. I know I’m supposed to avoid the Flame Waves and Shadow Fissures, but I always seem to be getting knocked back or something right as a Flame wave hits. Also, I can never manage to keep my pet up for more than 50% of the fight.

I know I need to plan out my position and call my pet back while the Flame Waves are coming, but it always seems easier said than done. My first few times in here had gone really well, but ever since then I seem to fail at Flame Waves.

Ok, I’m off to TankSpot.com now to watch some Obsidian Sanctum videos.

I took my Devilsaur and manual rotation into a 25 man Obsidian Sanctum run last night. There was no Hunter loot to roll on and I didn’t win the Dragon Hide Bag or Large Satchel of Spoils, but what I did do was top the damage meters, which included besting a comparably geared Survival Hunter. I know that versus a well geared and skillful Surv Hunter I’d be choking on their dust, but it’s comforting to know I can still compete amongst the mere mortals.

The night before I did a 9 man guild run on Sartharion and got my T7 gloves. Stats-wise, for a BM Hunter they are a slight downgrade from what I had been using, Handgrips of the Savage Emissary, but the 2 pc. item bonus is the kicker. The additional 5% pet damage more than makes up for some of the AP and crit rating that I lose.

This was only my second 25 man run in WotLK, and both times I have come out on top for overall damage, and this time I even topped DPS as well. I’m curious to know how other BM Hunters are doing compared to other high damage classes including Survival Hunters. I feel like we’re still pretty competitive when it comes to raid DPS. Surv Hunters, Blood Death Knights, Rets and Elemental Shaman have been the classes/specs I’ve noticed to be consistently high on the meters. In my guild, I usually trade off with a Blood DK and sometimes Fury Warrior for top damage.

Although I’m really hoping we see some buffs in 3.1, I am enjoying having to really work to compete for a top spot in the damage department. We had it easy-mode in TBC, it’s serious business now. 😉