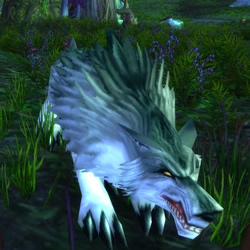 These days Mist Howler is nothing special, apart from him being a rare spawn, but back in the day he was a prized pup. Mist Howler was one of the few pets available with a very fast attack speed, which was most beneficial for caster interrupts in PvP. There were a handful of faster pets, but Mist Howler was one of the few wolves with the fast attack speed, plus he was the only FAS wolf with the “wolf” model, as opposed to the “worg” look.

The minute I reached Ashenvale with Garwulf I had to have me one of the light gray wolves. It was my absolute favorite pet look at the time. Later on when I found out that there was a really special wolf with that model – I had to have him.

I searched for this pet off and on for months to no avail. Trying to find Mist Howler was like tracking down a sasquatch, and I began to think he was just a myth. Eventually I threw in the towel once I hit the 50s and was able to go after such pets as Spiteflayer and Deathmaw, both of which had the even faster 1.2 sec attack speed.

My search for Mist Howler was put on hold…until later.

Because hunters are so awesome, I ended up rolling another one back in vanilla – partly so that I could try huntering as a dwarf, but also so that I could tame some more pets! We only really had 2 functional stable slots back then, so if you wanted more pets you had to have more hunters! Once my dwarf gained the ability to tame, my first target was Bjarn. My second target….you guessed it…Mist Howler!

Right around the time I hit 20 or 21 I made the journey to Kalimdor, then on to Ashenvale to look for this ghost. I swear, Mist Howler was and still is one of the least seldom seen pets in the game, for me at least. He is extremely hard to get. This is partly because his spawn timer is pretty lengthy. I seem to recall he spawned only twice per day, and what made matters worse is he would often spawn in high traffic areas where he’d often be killed by questing players.

The second time around I still had a terrible time trying to find this guy until one day…I logged in and patrolled his spawn areas and…boom! There he was. Sitting atop this rock right next to that first little empty house as you enter Ashenvale from the south. I was so pleased to finally get the chance to tame this elusive pet, and to this day, it’s still one of the fondest hunter-pet-taming memories I have.

Although the story isn’t all that exciting, taming Mist Howler was a very memorable WoW moment for this hunter. 😉

Too bad I don’t have a screenshot of my dwarf with Mist Howler. I searched and searched, but it seems I had a hard time finding my screenshot button back then. I did find a picture of him with Death Flayer, so take that! 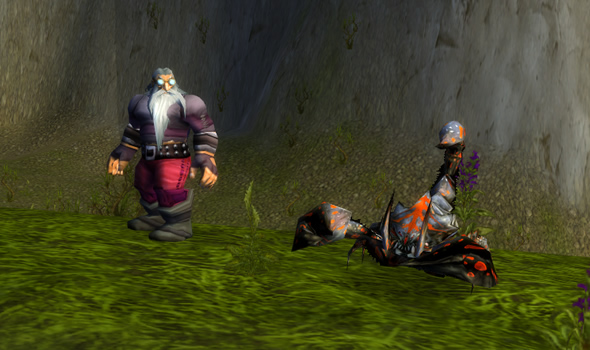