Back before I began this website, I was really active in the 10-19 PvP bracket. It’s not something I’ve discussed much on here over the years, but I was part of a 10 man team that was considered tops in the Vengeance battlegroup. We used to schedule premade Warsong Gulch matches with competitive horde guilds, and let me tell you…a few of those matches were the most epic PvP battles I’ve ever been a part of. I’ll talk more about this in a future post.

These days twinking is nowhere near the competitive and popular subculture that it once was. There was a time when my 19 hunter was more or less my main. Crazy, right?! Not if you were into it.

Being a a competitive twink means you’re always striving to have the best gear imaginable. This is part of what made twinking so fun back in the day. There were no heirloom items, and properly optimizing your character for competitive play took some serious work, but gearing your twink was fun and rewarding.

Any chance I could get I’d be down in Stranglethorn Vale on Sunday afternoon trying to fish up either a Keefer’s Angelfish or Brownell’s Blue Striped Racer. Those fish would redeem for 2 BiS items: Lucky Fishing Hat or Nat Pagle’s Extreme Anglin’ Boots. The fishing hat was the Pièce de résistance of twink gear, with the boots being a close runner-up.

After weeks and weeks braving the hostile conditions of being a level 19 in a neutral 40-45 zone, I finally snagged a Brownell’s Blue Striped Racer during the fishing tourney. I was absolutely thrilled!

Some of you may be like, “hmmm…neat story…”, but let me tell you…winning those boots was pretty special for a lowbie. Back in those days there was no level restriction on them so you could equip them at 19, plus they could accept Outland enchants, where as the more conventional and obtainable hunter footwear alternative, Feet of the Lynx, could not. Being able to use enchants like: Cat’s Swiftness, Dexterity, Surefooted or Boar’s Speed made a HUGE difference at 19. 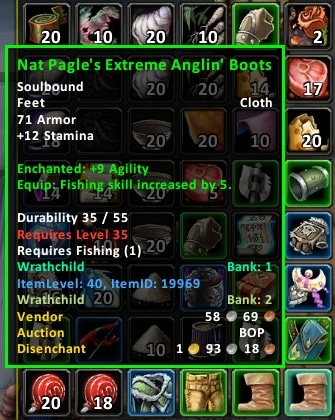 The screenshot on the right offers a glimpse into my long-retired 19 hunter’s bank, full of memories from a bygone era. Notice the Quiver of the Night Watch that I’m still holding onto! As you can see, I can no longer equip my trusty fishing boots of death, but I still hang onto them for ol’ time’s sake. ;*)

Obtaining those boots as a competitive 19 twink was not unlike winning a BiS ranged weapon from an end-game boss. It was exciting!

Just as with raiding, the weeks and weeks of attempts leading up to my lucky catch made the reward that much sweeter. Those fishing contests were fun, albeit a little stressful at times. You had to worry about getting ganked by high level Horde players, and you were always in a hurry to find the next school of tastyfish due to the competition that was always out there.

And if you dared to brave those little islands just off the coast, you’d always run the risk of having Rippa put the chomp on you.

I never did fish up a Keefer’s Angelsfish, but catching a Brownell’s Blue Striped Racer was a most memorable WoW moment for this 19 hunter!