One of the things I’ve been doing lately is exploring some old dungeons, which are all new to me. I never raided back in vanilla, and in TBC, the furthest I’d progressed was Mag’s Lair, so I missed a lot of that old raid content. Experiencing it now is still fun, but I can only imagine how much of a rush it must have been to defeat those bosses back when the content was relevant.

Black Temple can still pose a couple of challenges (RoS & Illidan), but even at level 90…something about soloing Mr. Stormrage here just doesn’t seem right. 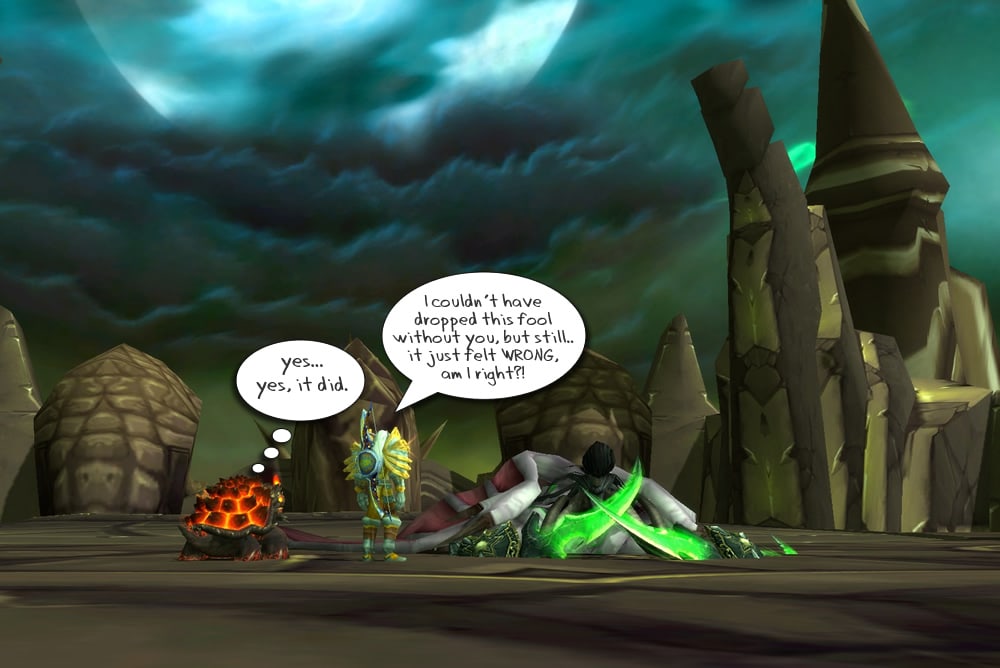 The primary reason for visiting this old content is so Gar Jr. can experience it on his character, get the achievements, and of course…the shiny purple gear. He really doesn’t like to do much in the way of fighting – he’s pretty much all about the gear. He just enjoys following me around at a safe distance, scooping up all of the loot, then hiding behind a pillar or something while I fight the boss bad guys.

He was hoping for a Glaive, but no luck, although we did get the legendary item for Sulfuras on our first ever run of MC a few weeks back. The kid is lucky and has NO IDEA… Those of you who were a part of progressive guilds back in the day…I can’t even begin to imagine the level of heart-pumping and profanity that these encounters must have brought on.

Downing Gruul for the first time was a big one for me, as was Kel’Thuzad, and then Anub’Arak, but those seem to be amateur hour when compared to downing Nefarian at 60, or Illidan at 70.

Occasionally I do miss raiding…some good times they were. :*)

Next up…Sunwell Plateau. Should be fun.