As is the case with an ever-evolving game like World of Warcraft, it’s often that we bloggers have to go back and revisit or adjust articles and guides that we’d just written…

As some of you may have heard, Blizzard fixed a bug which was affecting (i.e., enhancing) the way pets regenerate focus. Hunter pets were mysteriously returning to full focus whenever the hunter’s stats would change, e.g., trinket procs. This has been corrected, leaving hunter pets more focus starved these days. 🙁

In a recent BM PvP Guide, I showcased my BM PvP build which did not feature any talents from the MM tree. I had pointed out the fact that I felt Go for the Throat and Sic ’em were not needed since I hadn’t noticed my pet ever becoming focus starved.

Well that has since changed.

Since the fix, I noticed my pet’s focus nearing empty many times. To counter this, I’ve pulled two points from Survival Tactics and placed them into Go for the Throat. It’s not an answer to this recent fix (i.e., problem), but it has helped a bit with keeping my pet’s focus pool replenished.

The good news is… as of Patch 4.2, Spell Penetration is now affecting trap resistances! Because of this, Survival Tactics has become a slightly less attractive talent for PvP. The more serious PvP hunters will be running with at least 100 Spell Penetration, offsetting the need for the 4% trap resistance. The shorter Disengage cooldown is tough to give up, but at least it’s the only sacrifice.

Update: 10/05/11 – It’s been discovered that traps have an inherent chance of ‘missing’ no matter your hit rating or spell pen. See this post for more information on whether or not you should spec 2/2 Survival Tactics.

In short, my build is quite similar to what I was running before, with only a couple of trade-offs..

The advantages of my new BM PvP build:

Because of the pet focus fix, a BM PvP build like this one is quite attractive, but I still really like having the benefit of a build with 2/2 Entrapment. 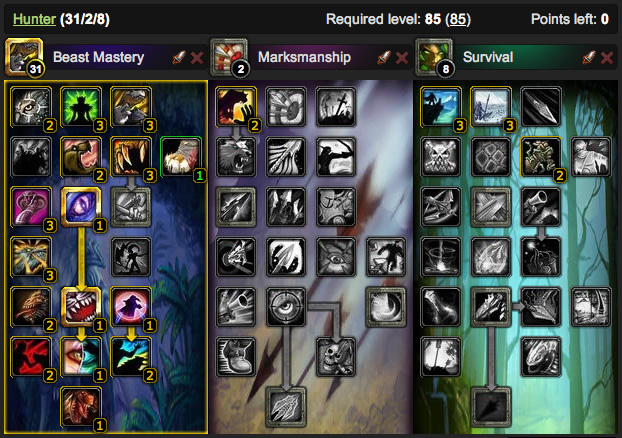 My glyphs are unchanged.

If you missed the first post and would like to read a bit more info on my chosen BM PvP build, you can find the guide here.