I’ve always found it interesting to see the actual gaming setups of my fellow World of Warcraft enthusiasts. I’m actually not much of a “gamer” so to speak, so my computer area is more home-office in nature. This fact is readily apparent when you see the iMac perched atop my desk. No self respecting gamer would ever be caught dead with an Apple. 😉

That doesn’t mean my computer isn’t up to the task though, well at least for WoW anyway. Quite the contrary in fact. With all of the settings maxed, I usually am running between 40-60fps in WoW with typically less than 20ms latency. Mind you that’s on a ginormous 24″ beautiful Apple display.

As far as gaming goes, until Diablo III is released or possibly SC II, WoW is all I have time for really. As long as my machine can run WoW as beautifully as it does, then I’m happy as a clam at high tide. It does everything else brilliantly.

Alright, so here’s a glimpse into the World of Garwulf. This is where the magic happens… this is where rare exotic beasties are tamed, where I sit as I get butchered by Rets in arena, where I push buttons whilst I try to hit 7K DPS on Thaddius, where I earned my 50,000th Honor Kill, where I… alright, alright, enough of the dramatic intro… 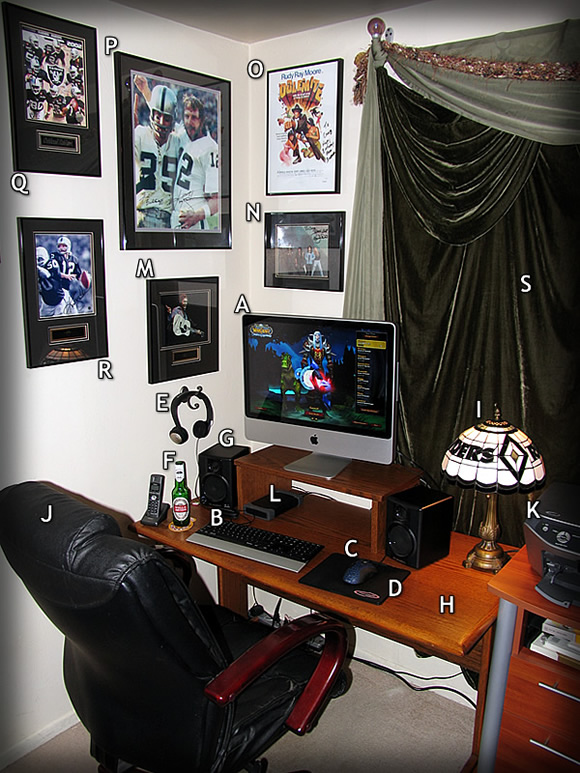 Itemized Breakdown of the Command Center

A little over a year ago I made the switch from PC to Mac. Apart from a hard drive taking a poop on me, along with various other problems I’d had with my previous Mac’s hardware, I’ve been pretty happy about the switch. Apple has taken good care of me when I have had problems, so I can’t complain too much.

Recently they presented me with a brand new machine after my previous one had been deemed a lemon. After an unsuccessful attempt at fixing it, they finally elected to just send me home with a brand new one. My new and improved iMac has all the bells and whistles, including a whopping 1 TB hard drive, 4 GB of ram, a beefy nVidia graphics card, additional USB ports, and the new iLife ’09.

Although I was approaching wit’s end after dealing with the troubles I’d experienced with my previous mac, getting this new and improved version helped to quickly dull a lot of that pain. 😉

When Apple replaced my iMac last month, they ended up giving me a brand new one which of course came standard with the dinky-ass iMac aluminum keyboard. It looks sexy as hell, but it is sans a number pad and a few other buttons that I like to have, such as page up and down.

Rather than drop fifty bucks on getting the Apple keyboard with the numeric keypad, I decided to blow my Amazon gift card my dad gave me for my birthday on a fancy schmancy cordless one. I almost pulled the trigger on buying a new Logitech G19, but I just couldn’t do it. I was sooo close to getting the G19 because I wanted those extra macro keys and the backlighting, but in the end I went with practicality. The G19 is hot, but at $199 it’s a little steep for a keyboard. It has a lot of cool extra fluff, but since I’m not that hardcore of a gamer, I didn’t see it as all that necessary.

The DiNovo for mac is awesome. It’s tailored for the mac, so it has all of the exact same keys including command and the iTunes controls, plus it looks fantastic and matches the iMac quite nicely. The footprint is very small and it’s cordless which is also handy. The keys themselves are a dream. They’re comparable to laptop keys without all of the clackity of a standard desktop keyboard.

The only things I’d change about it would be to make it Bluetooth. I miss having the USB ports in the keyboard too, but everything else about it is so awesome that it’s not that big of a deal.

I love this mouse. I’ve been using it for a few years now, and I’d say it’s probably my all-time favorite mouse. Prior getting this one I was using its predecessor, the Logitech MX 518, but I wore that one out. The MX 518 is a great mouse, but the G5 trumps it a bit with more sensitivity, adjustable weight and some other cool features. I like the surface of the G5 a little better too.

I recently tried a Razer Mac Death Adder, but I just didn’t like it as much as the G5. I bought it because it’s one of the only gaming mice with drivers available for the Mac, plus it’s badass looking and has a sweet pulsing white glow. 😉

Although it’s a highly rated mouse, i just didn’t like it as much as my G5 so back it went. I guess if it ain’t broke, don’t fix it.

No problem with tracking on this mouse pad. These things cost a bit more than a run of the mill mouse pad, but they’re well worth it. I’ve been using this one for about four years now and I love it. Razer makes some pretty slick ones too if you’re a fan of their products.

I’m pretty particular about sound, which is why I paid a couple of extra bucks for a Sennheiser headset. This headset also doubles as a pretty good set of headphones. I also have an audiophile pair of Sennheiser HD-555’s, but my wife now uses them and won’t let me have them back. :-\

These things kick ass. When I got my iMac I wanted to go back to a simple 2 channel stereo setup. Before when I was using a PC, I had the Logitech Z-5500 surround sound setup, which is arguably one of the greatest computer speaker systems ever. However, the Z-5500 takes up a lot of real estate and I wanted to go with a clean minimalist setup to compliment the iMac.

These M-AUDIO speakers pump. They’re not the daintiest things in the world, but if you want great stereo sound you need to have cabinets. I’ll tell you one thing though, I don’t miss banging my knee anymore on that ginormous subwoofer that’s part of the Z-5500 system.

For music, gaming and audio editing, I highly recommend the M-Audio AV40s.

They just don’t build stuff like they used to. This desk flat out rules. I’ve had it since I was thirteen years old and it has moved with me many times over the years. The thing I love most about it is it breaks down into 4 pieces and can be transported very easily, yet it’s not like one of those cheapie pressed board ones you see at all of the office supply stores these days.

Desk accoutrement courtesy of the wifey. This provides me with a nice soft light with which to compute by.

Leather Executive Chair my wife bought me for my b-day last year. It’s a pretty awesome chair for the price, but I think I’m going to upgrade to a Herman Miller Uber Pimp Throne come next year. My wife’s company has those in their board room and they are the goods. If you sit working at a computer for long periods, let alone gaming for hours on end, then a high quality ergonomic office chair is a must.

I’ve always like Epson products and this multifunction is alright, but the ink is so terribly expensive I don’t think I can recommend it. It’s great photo quality printer, just don’t plan on using it for that or it will put you in the poorhouse.

Take it from me… keep current backups of your data at all times. I cannot stress just how important that is. This little hard drive is great. It’s very low profile, extremely quiet, and at only a little over a hundred bucks, it’s a killer value. My old MyBook went down for the count a few months ago so I picked up one of these babies. A very wise investment indeed.

You can’t deny the power of the Neil.

Autographed photo of Ronnie James Dio along with his bandmates circa 1996. DIO is not only one of my favorite hard rock vocalists of all-time, but one of my favorite singers period. The guy’s a total stud and still rocking hard as ever at age 67.

I met DIO at a convention in Hollywood, CA back in ’97 and chatted with him for a bit after he signed this photo for me. A truly nice guy and very humble.

At another convention I attended a few years back, I had the good fortune of seeing Rudy Ray Moore perform his stand up routine at an historic little club in St. Louis, MO. Rudy hasn’t aged so well and required assistance when taking and exiting the stage, but he’s still as dirty as ever. He signed a Dolemite lobby card poster for me before the show, which also happened to be on my birthday!

The famous shot of the two Super Bowl XI MVPs taken after downing the Vikings 32-14.

Al Davis’ “Dream Team” which won him the AFC Championship, but failed to deliver in the Super Bowl. It’s a little frontrunner-ish, but it was a gift from one of my clients. No denyin’ we had a great team that year though.

Autographed photo of the Snake one of my clients traded to me for some web work. Hall of Fame..? Hello..?

I’m a fan of the Oakland Raiders by the way. Just in case you didn’t notice. 😉

S. Fabric that protects me from the round fire in the sky

I hear tales of those who are brave enough to venture outside when the round fire burns hot and lights up the sky. These tapestries help shield me from its harsh rays.

So there ya have it… a glimpse into the world of a WoW gamer and Mac user. I’m really quite content with my setup and highly endorse all of the items pictured here. If you have any further questions about any of it, please post a comment or shoot me an e-mail via my contact form. I’ll be happy to further comment on what it’s like playing WoW on an iMac, why I like Logitech, the sexiness of my new diNovo keyboard, and what my beverages of choice are when raiding.

Alright already, I know the question that burns deep inside your mind… “OMG… where can I get me one of those autgraphed Neil Diamond pics like Gar has on his wall..?!” ebay’s a good start