Well, not really… but I did get the achievement last night. 😉 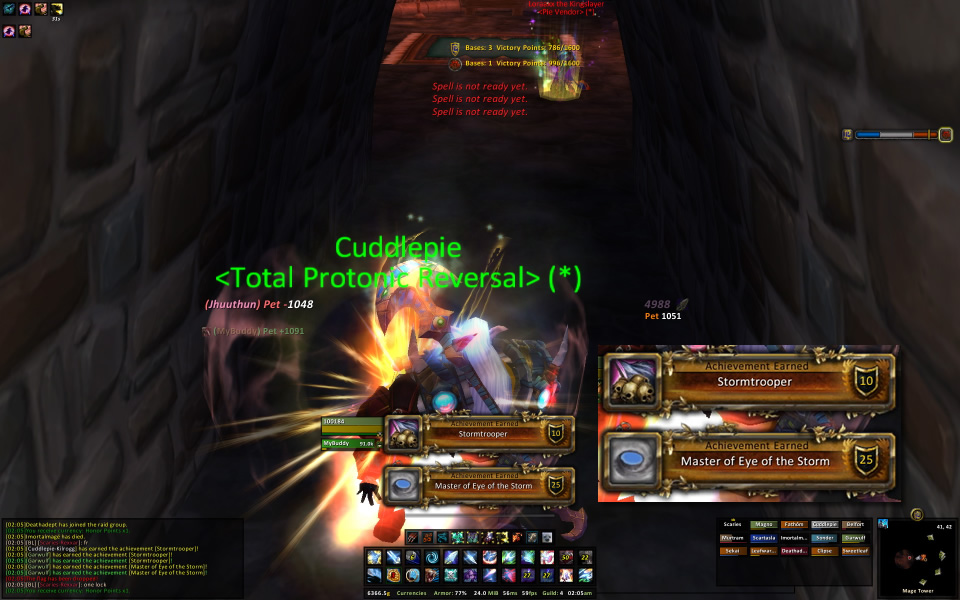 Funny thing with PvP achievements – you just don’t know when you’re going to get some of them. Such was the case with Stormtrooper. When I decided I was going to try for the Battlemaster meta-achievement, Stormtrooper became one of the toughies (for me anyway) to knock down. To earn the Stormtrooper achievement, one must kill 5 enemy flag carriers in a single battle. You’re not required to land the killing blow, you just need to qualify for the honor kill. I’d reached 4 many times, but never 5.

One reason I’ve never managed this achievement is because I’m usually busy attacking or defending bases. Being preoccupied with the flag, and trying to stomp the enemy flag carrier does not win games – 3 or more bases wins games.

Just as with some of the other PvP achievements, this one I consider to be counter-productive, as it usually requires you to act in a manner that’s not necessarily representative of the main goal… winning the f’ing game. However, I’m happy to have earned the achievement, and happy to be done with it. 🙂

As I was saying… with some of these achievements, the stars need to be aligned in such a way in order for you to get them. For example, the few BGs I participated in last night were miserable. The alliance PvP queues were rife with afk’ers, bots, and honor kill junkies. I couldn’t get on a good team to save my life. But… I wanted to win at least one match before I went to bed, so I kept queueing.

Finally, I ended up in an Eye of the Storm, which was a good sign. Alliance seems to do pretty well in EotS, and that’s also my highest winning percentage BG.

Once it started, I proceeded on my usual route over to the Draenei Ruins, then heading over to the Blood Elf Tower to try and take it. In the meantime, the horde had gone to work on the flag, and were approaching the contested BET to cap. We downed the flag carrier while the flag was gray, then another horde recovered the flag and got dropped as well. Within a minute or so, I was already 2/5 for this achievement. A good sign.

At that point, I decided to become an FC assassin, quickly amassing 2 more kills on enemy flag carriers. With each team hovering below 400 resources, and me with 4 FC kills already, things were looking good. Pretty soon, however, the horde started traveling to the flag en masse, using the same route each time, and very few alliance players were pursuing. I tried a few times to get the fifth kill, but no luck.

Eventually a few of us assembled and charged over to the base the horde was using for their routine cap, while most of the defending horde were in the middle going for the flag. By the time they returned, the base went contested, so they couldn’t cap.

Holding the flag was a decently geared bear, who just-would-not-go-down. Even worse, the horde were starting to overrun us and retake the node. I unloaded on that bear with everything I had, spamming my kitchen sink macro, but he seemed to never go below 5% health. I kept thinking, man… if that bear stays up long enough to cap I am gonna be so pissed.

Well he didn’t, and I ended up quite happy. 🙂

Bad news is, we lost the game, but I didn’t care… there will be others. I was quite happy to have finally earned my ridiculous Stormtrooper achievement. 😀